Pope Francis kicks off a Baltic tour in Catholic Lithuania on Saturday where he will honour victims of the region’s Nazi and Soviet occupations as the Church reels from fresh clerical abuse scandals. The four-day trip to the northeastern edge of the European Union and NATO alliance brings him geographically close to Russia, where Vatican…”
Editor
News World News 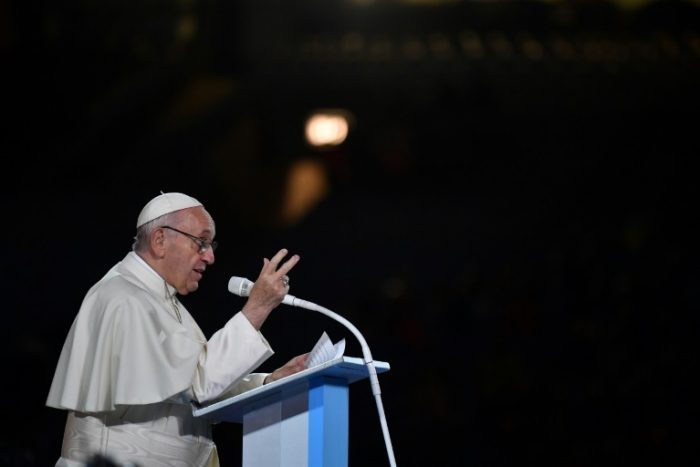 Pope Francis kicks off a Baltic tour in Catholic Lithuania on Saturday where he will honour victims of the region’s Nazi and Soviet occupations as the Church reels from fresh clerical abuse scandals.

The four-day trip to the northeastern edge of the European Union and NATO alliance brings him geographically close to Russia, where Vatican diplomats have been trying for years to arrange a papal visit.

The pontiff will also visit mainly Protestant Latvia on Monday and secular Estonia on Tuesday as all three Baltic states mark 100 years of independence this year.

But the celebrations risk being overshadowed by a fresh wave of devastating claims of sexual abuse by clergy across the globe.

Scandals in Australia, Europe, and North and South America have involved widespread claims of abuse — and cover-ups — by clergymen and lay members with one archbishop describing it as the church’s “own 9/11”.

Pope Francis has called for a meeting of the heads of Catholic bishops’ conferences at the Vatican next February to discuss the issue of the “protection of minors”.

However, the pontiff has kept a stony silence regarding claims he had ignored allegations of abuse that were reported to him.

U2 frontman Bono said he could see the pain on Francis’s face after a Wednesday meeting when he told the pope that “it looks to some people that the abusers are being more protected than the victims”.

Church authorities in Germany are expected to officially publish a study detailing decades of child sex abuse by priests as Francis winds down his trip on Tuesday.

According to the study, 1,670 clergymen in Germany committed some form of sexual attack against 3,677 minors between 1946 and 2014, Spiegel Online reported earlier this month quoting leaked data.

Francis will meet President Dalia Grybauskaite in Vilnius on Saturday before addressing youth and visiting a revered icon.

His trip will follow in the footsteps of late Polish-born pontiff Saint John Paul II, who travelled to all three Baltic states in 1993, just two years after they broke free from the crumbling Soviet Union.

The trio have since firmly anchored their sovereignty in alliances with the West by joining both NATO and the EU in 2004.

While that led to solid economic growth, it also brought social inequality that triggered mass emigration to western Europe — a troubling trend for states with populations ranging from 1.3 to 2.9 million.

The last century of Baltic state history was marked by the Nazi invasion — which wiped out almost all of the region’s Jews — and then decades of Soviet occupation during the Cold War.

Behind the Iron Curtain, the Catholic Church played a key role in the non-violent anti-Soviet resistance, especially in Lithuania, the only Catholic-majority country of the three.

“The Church was a fortress for all dissidents, not only Catholics. It strongly resisted Sovietisation and defended the rights of believers,” historian Terese Birute Burauskaite told AFP.

As a result, it was persecuted with both priests and bishops killed by the authorities.

Vilnius estimates that more than 50,000 Lithuanians died in camps, prisons, and during deportations between 1944 and 1953. Another 20,000 partisans and supporters were killed in anti-Soviet guerilla warfare.

“I will honour all those whose past sacrifices have made freedom possible in the present,” the pontiff said in a Thursday video message addressed to the people of the Baltic states.

Francis will visit a museum in the former KGB building in Vilnius where regime opponents were tortured and killed.

He will also honour Holocaust victims at the ghetto memorial in Vilnius, known as the “Jerusalem of the North” for its vibrant Jewish community prior to WWII.

Around 200,000 Lithuanian Jews died at the hands of the Nazis and local collaborators under the 1941-44 German occupation.

Today there are only around 3,000 Jews left in the country of 2.9 million people.

27-Year-Old In Court For Murder Of Friend’s Wife