Men of the Osun State Command of the Nigerian Police yesterday engaged some hoodlums at the Don Plaza, MDS area Osogbo. The engagement led to the exchange of gunshot with several vehicles destroyed and scores of passersby injured. Trouble started when some unidentified hoodlums approached the CEO of Don Plaza to demand for “settlement” with…”
Yusuf
News Osun 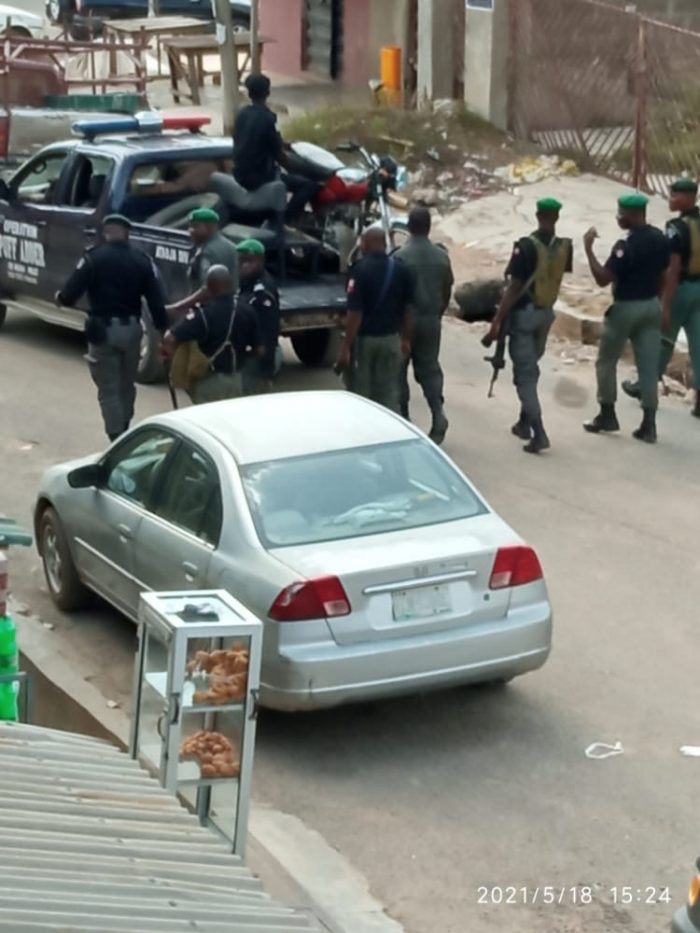 Men of the Osun State Command of the Nigerian Police yesterday engaged some hoodlums at the Don Plaza, MDS area Osogbo.

The engagement led to the exchange of gunshot with several vehicles destroyed and scores of passersby injured.

Trouble started when some unidentified hoodlums approached the CEO of Don Plaza to demand for “settlement” with some amounts of money.

After all efforts to have Don Plaza settle them proved to be unsuccessful, the hoodlums threw caution to the wind and started causing trouble within and around the plaza, as well as harrasing other people within the vicinity.

According to an eyewitness account, at around 3pm, when the behaviour of the hoodlums seems to be going out of hand, the police invaded the premises allegedly on the request of the CEO of Don plaza to chase the hoodlums away.

However, upon arriving, the policemen allegedly began to shoot sporadically to scare the hoodlums away.

Some of the eye witnesses claimed that the policemen shot directly at the hoodlums, while the thugs were also shooting at the police.

According to them, innocent people in the MDS area became victims of the sporadic shooting between the police and the hoodlums, leading to the destruction of several cars parked around the area.

In an attempt to take cover from the flying bullets, some people also sustained various degrees of injuries.

Some of the affected victims described the manner of the police shooting as totally unprofessional, stating that the police should have approached the matter with more caution.

One of the victims who spoke to Osun Defender, Mr Olarenwaju Yusuf, who owns a photo studio in the area said he is still in shock.

He showed the bullet holes on his car’s windshield and asked that the matter must not be swept under the carpet.

He blamed the police for the destructions and demanded that the police should fish out the it’s men that carried out the shooting at Don Plaza to prevent future occurrence.

He also ask that those whose cars were destroyed should be compensated by the police.

But the Police Public Relations Officer, Osun Command, Mrs Yemisi Opalola, while responding to enquries by Osun Defender said policemen were only preventing hoodlums from invading the plaza and extorting traders there and that some of the hoodlums were armed with dangerous weapons and were unyielding to the civil plea of the policemen.

According to her, “the police shot into the air to disperse the crowd of the hoodlums who were obviously waiting to commit crime and disturb the public peace, our men didn’t shot at the people, they are professionals”.

She also challenged anyone that claims he or she was shot or has gunshot injury to come out and report at the police headquarters.

‘Obasanjo should be relegated to the dustbin’ – Oshiomole