Inspector Dania Ojo who shot dead one Adaobi Ifeanyi and wounded another, Emmanuel Akomafuwa, in Ajegunle area of Lagos last Saturday, has been dismissed from service and declared wanted. The Lagos State Commissioner of Police, Mr. Zubairu Muazu, disclosed this while addressing journalists at the Lagos State Police Command headquarters, Ikeja, on Thursday. The News…”
Yusuf
News 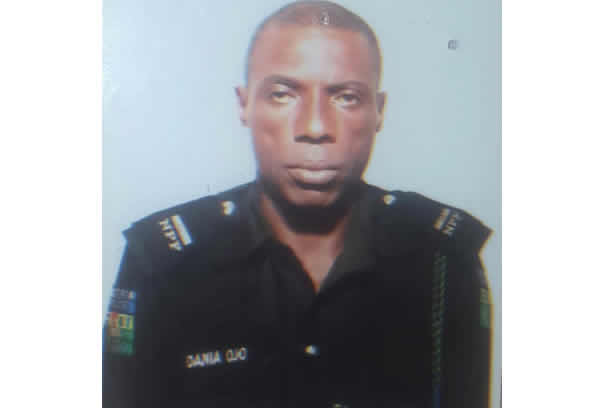 Inspector Dania Ojo who shot dead one Adaobi Ifeanyi and wounded another, Emmanuel Akomafuwa, in Ajegunle area of Lagos last Saturday, has been dismissed from service and declared wanted.

The News Agency of Nigeria recalls that Inspector Ojo, together with five other policemen had, on April 13, accosted their victims during which he shot Ifeanyi who died on the spot.

The five policemen were, however, subjected to orderly room trial, while Ojo has since been at large.

“On April 13, 2019 at about 7:00am, Police officers attached to Trinity Police Station who were suspected to be involved in the shooting of Adaobi Ifeanyi and Emmanuel Akomafuwa at Akpiri Street, Olodi Apapa, were arrested and detained,” he said

“Inspector Dania Ojo, who escaped immediately after the shooting was declared wanted. The other Police officers were subjected to internal disciplinary proceedings at the Command headquarters Ikeja.

“Investigation revealed that Inspector Dania Ojo unilaterally carried out the shooting without consideration for laid down procedures on the use of firearm.

“He is, therefore, found guilty of abuse of power, unlawful and unnecessary exercise of authority.

“He is thereby dismissed from the Nigeria Police Force and declared wanted. Upon arrest, he will be charged to court for murder,” the CP said.

Our Position Of No Election In Anambra Still Stand – IPOB