The Nigeria Police Command in Kwara state has arrested three suspected burglars and two alleged receivers of stolen items in Ilorin, the state capital. Mr Okasanmi Ajayi, the state PPRO in Ilorin on Friday gave the names of the suspects as Ayo Rasaki Sakiru, Iliyasu Rasaki and Jimoh Mashood. He said the arrest of the…”
Olamide
Crime News 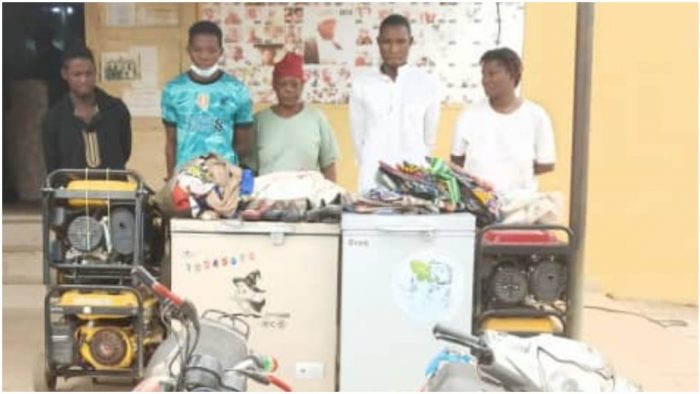 Mr Okasanmi Ajayi, the state PPRO in Ilorin on Friday gave the names of the suspects as Ayo Rasaki Sakiru, Iliyasu Rasaki and Jimoh Mashood.

He said the arrest of the suspects was sequel to recent reports of shop-breaking and stealing around some areas within Ilorin metropolis.

According to him, the Commissioner of Police, Tuesday Assayomo, gave a marching order to the DPOs of the affected areas to go all out to stem the emerging trend and ensure all the perpetrators of the criminal acts were arrested.

“Consequent upon the CP’s order, the DPOs swung into action wherein the suspects were arrested,” he revealed.

Okasanmi said “all the suspects confessed to the crime, and revealed they had burgled several shops at Fate and Stadium road areas in Ilorin and stolen valuables therein.”

The police spokesman also revealed that Fatima Shuaibu ‘f’ and Olajumoke Yusuf ‘f’ both alleged receivers and custodians of the stolen items were also arrested.

“Investigation into the matter eventually led to the recovery of two deep freezers, four Elepaq generators, six pairs of shoes, 90 pairs of ankara materials, one Bajaj motorcycle with Reg No: DPG 589 OGUN and one Haque Lucky lady machine with Reg No: KSF 550 GP.

“Efforts are ongoing to arrest other members of the syndicate and possible recovery of already sold stolen items,” Okasanmi added.

The Commissioner of Police, again warned criminal elements to vacate Kwara State and relocate else where, declaring that a criminal who succeeds in committing crime would never succeed in escaping arrest.

Assayomo advised any criminal minded individual or groups in their own interest, to desist forthwith from their evil ways and embrace compliance with the law.

The suspects arrested in the instant case and others, would be charged to court as soon as investigation is concluded.