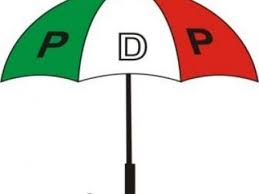 The long crisis rocking the Peoples Democratic Party (PDP) in Ondo State is still ongoing despite the peace movement to reconcile all the aggrieved and warring factions of the party.

For over three years the Peoples Democratic Party (PDP) has been enmeshed in crisis over the party leadership in the state.

The battle to control sole leadership of the party, which forced members into factions right from the units, wards, local governments and to the state levels, is still a thorn that has refused to leave the flesh of some of its belligerent stalwarts.

A SaharaReporters correspondent in Ondo State observed that the attitude of these purported “foundational members” has further worsened efforts to make peace in the party.

The genesis of the leadership crisis in the PDP can be traced to October 2014, when former Governor Olusegun Mimiko defected to the party from his defunct Labour Party (LP) and used the instrumentality of the state to take over the whole structure of the umbrella party.

The mass exodus of  Labour Party members into the fold of the PDP in the state sparked an intense power struggle within the party, as many of it stalwarts criticized the impunity and forceful hijacking of the party by Mr. Mimiko.

Mr. Mimiko’s leadership created divisiveness within the party, causing members to split into two opposing factions. One faction was led by Clement Faboyede while the other was led by Biyi Poroye.

The Faboyede faction fielded Mr. Jegede as a candidate while the Poroye group filed Mr. Ibrahim as its own candidate of the party. The apex court later authenticated Mr. Jegede as the true PDP candidate after a prolonged court battle with just few days to the poll.

This internal leadership crisis led to a victory for the opposition All Progressives Congress (APC) in the November 26, 2016 Ondo State governorship election.

Furthermore, the leadership crisis of the party at the national level that emanated from the Port Harcourt convention held on May 21, 2016, did more damage to the Ondo State chapter of the party.

The stalemate of that convention divided the party members into two factions at the national level, where one was led by the erstwhile governor of Borno State, Ali Modu Sheriff, while the former governor of Kaduna State, Ahmed Makarfi, led the other.

The Supreme Court judgment then authenticated Ahmed Makarfi as the national chairman of the PDP after a long, drawn-out legal battle. The judgment also validated Mr. Faboyede as the state chairman of the PDP, causing a deeper rift between the two factions of the party’s Ondo State chapter.

Our correspondent revealed that the party is still divided over the issue, as many party members are still bitter about the party’s loss in the 2016 gubernatorial race due to party infighting.

Others are also still angry over the hijacking of the party by Mr. Mimiko and other former Labour Party members.

A SaharaReporters investigation showed these internal feuds have made the peace and reconciliation moves of the party futile.

Undercover findings by our correspondent revealed that instead of applying a genuine internal mechanism with wide consultation to bring aggrieved members and leaders together under the same structure, some party leaders are applying the carrot and stick approach in mending the broken fence.

This approach, to many party members, is to avenge the wounds of losing the November governorship election to the APC because some group within the party worked against attaining its victory.

And to further worsen the crisis in the party, on July 27, 2017, Mr. Faboyede announced the expulsion of the Poroye-led executive members of the party in a statement issued in Akure.

Mr. Poroye, according to sources who spoke with SaharaReporters, was believed to have sold out by supporting the candidature of Jimoh Ibrahim, which frustrated the chances of the PDP during the electioneering period.

Mr. Faboyede, in his statement obtained by SaharaReporters, said that the Poroye faction was expelled after they shunned an invitation to appear before the State Disciplinary Committee of the party.

Those suspended with Mr. Poroye are Johnson Alabi, Yemi Ajonibode and Ademola Genty.

Mr. Faboyode claimed that the deliberate act of shunning the disciplinary committee shows that the Poroye group has no respect for the party and its constitution.

“We note most disappointingly that the dissolved illegal Poroye-led executive remains irreconcilable, intransigent and disloyal to the party goals.

“This is clearly attested to by the many provocative and irresponsible vulgar vituperations in both the formal media and social media.

“As responsible managers of our party in the state, we feel that these actions cannot be justified or excused, particularly in view of our recent experience,” he added in the statement.

But Mr. Poroye fired back and described his suspension and that of his execution as a nullity while stressing that he still remains the “authentic chairman” of the Ondo State PDP.

He said the battle line had already been drawn, noting that those who carried out his suspension do not understand the procedure of sacking members from the party.

“Don’t forget that they have done it [expelled us] several times, but the question now is how many times would they expel if they actually had the ability to do so by studying the constitution of the PDP very well.

“For instance, if I [Biyi Poroye] want to expel someone from the party, I know surely I cannot because the state structure of the PDP doesn’t have the power to sack someone. The recommendation would have to come from the levels of the wards and local governments before the state.”

Mr. Poroye further described his suspension from the party as an exercise in futility and claimed that some members of the Faboyede faction have called him to show their regret on the action.

Investigation revealed that some leaders of the party seem to have abandoned the PDP for new political parties ahead of the 2019 general poll.

This has been shown in the attitude of the former PDP chairman in Ondo State, Ebenezer Alabi, who spoke to sources very close to our correspondent in Akure.

Mr. Alabi, who has declared his defection to the new Mega Party of Nigeria (MPN), said the umbrella party has been taken over by some people whom he referred to as “vampires.”

He noted that the Ahmed Makarfi group of the party were not magnanimous in victory and stressed that some of them could no longer cope with the level of impunity in the PDP.

“I can’t imagine the Makarfi group talking about offering us amnesty in our own party as if we are militants and to my greatest surprise, they have chosen not to be magnanimous in victory,” he said.

Mr. Alabi, who also belonged to the Ali Modu Sherrif group had said the reconciliation move of the party might not see the light of the day if some of the party members still nurse political vendettas to punish those against their plot in the last poll.

Meanwhile, the seeming silence of former Governor Olusegun Mimiko on the activities of the PDP in the state since the guber election had been lost has also dashed the hopes of many members seeking the peace of genuine reconciliation.

Many members and leaders of the party who spoke to SaharaReporters at the weekend alleged that Mr. Mimiko had put up a “Plan B” before the ruling of the Supreme Court.

“Where he [Mimiko] now belongs to is what we don’t know, because his silence since the party lost the Ondo guber poll has further dashed the hopes of many.

“Throughout the leadership struggle in the Supreme Court, the former governor was silent on the activities of the PDP instead of rallying round to support members to boost their Morales

“And instead of maintaining his silence, he was instructing some of his diehard supporters who still want to remain relevant in politics to go join APDA [Advanced Peoples Democratic Party] in Abuja and float it up here in Ondo State.

“Many of them did as the governor had instructed and the party was launched here in Akure.

“One of those close to him [Mimiko] told us that the idea behind it was that there will still be a crisis in the PDP no matter the judgment of the Supreme Court, so it is better to have an option B at hand,” the source said.

Impeccable sources said that the debut of the Advance Peoples Democratic Alliance (APDA) might have also forced Mr. Mimiko to be conspicuously absent in the July expansive meeting of the state caucus of the PDP held in Akure.

The meeting, which had in attendance all prominent members of the party except Mr. Mimiko, was to chart a way forward for the PDP in Ondo State after the court verdict.

But with all the blinking in the PDP, it is not clear how the party will achieve genuine reconciliation by bringing warring factions together under the same umbrella ahead of the 2019 general poll.

With its house still divided, only time will tell if the PDP will get back on its feet in time for the 2019 election.