Pakistani Prime Minister Nawaz Sharif is set to return home on Friday to face jail term alongside his daughter Maryam. Their return could shake up an election race marred by claims Pakistan’s powerful military is working behind the scenes to skew the contest in favor of ex-cricket hero Imran Khan. Sharif is returning from Britain…”
Editor
World News 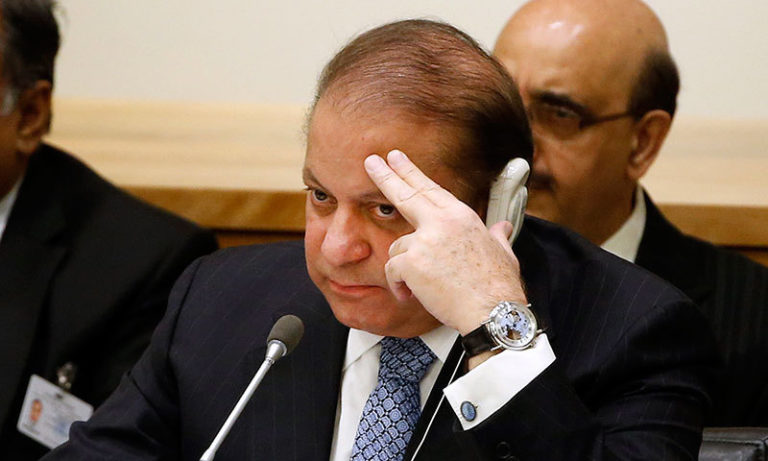 Pakistani Prime Minister Nawaz Sharif is set to return home on Friday to face jail term alongside his daughter Maryam.

Their return could shake up an election race marred by claims Pakistan’s powerful military is working behind the scenes to skew the contest in favor of ex-cricket hero Imran Khan.

Sharif is returning from Britain one week after an anti-corruption court handed him a 10-year jail term over the purchase of luxury London flats and sentenced his daughter and political heir to seven years in prison.

Thousands of police were deployed in the central city of Lahore and shipping containers placed along main roads, which could be used to block protesters from moving towards the airport, where Sharif is expected to land around 6.15 p.m. (1315 GMT).

Local police official Naveed Shah told Reuters his current orders did not include restricting people’s movements, but that could change when supporters of Sharif’s Pakistan Muslim League-Nawaz (PML-N) party take to the streets.

PML-N loyalists have said they will march to the airport in defiance of a ban on all public rallies.

Sharif alleges the military is aiding a “judicial witchhunt” against him and his PML-N party.

The party’s past five years in power has been punctuated by the civil-military discord that has plagued Pakistan since its inception.

The opposition Pakistan People Party (PPP) also alleged “pre-poll rigging” this week, but did not specifically name the armed forces.

The military, which has ruled Pakistan for about half its history since 1947, has denied interfering in modern-day politics.

It plans to place 371,000 soldiers around polling stations so there can a “free and fair” elections, an army spokesman said.

“That is why he is willing to lose 10 years of his life over this.”

Sharif’s PML-N expects a groundswell of support as he returns from London, where his wife Kulsoom is critically ill and undergoing cancer treatment.

To prevent PML-N workers staging a hero’s welcome on the streets, authorities said they will arrest the father and daughter upon landing and transport them to the capital Islamabad by helicopter, local media reported.

Sharif’s return comes at a time of dwindling fortunes for his party, which one year ago was considered a run-away favourite to retain power.

Recent opinion polls suggest PML-N has lost its lead nationally to the Pakistan Tehreek-e-Insaf (PTI) party of arch-rival Khan, whose anti-corruption message has resonated with many Pakistanis.

Khan has painted Sharif as a “criminal” who has looted the state for decades, and welcomes his prison term as overdue accountability.

Sharif was ordered jailed after failing to explain how the family acquired the London flats in a case stemming from 2016 Panama Papers revelations that showed they owned the apartments through off-shore companies.

Maryam was convicted for concealing ownership of the apartments. They both deny wrongdoing.

After the Supreme Court ousted Sharif last July, the courts barred him from heading the PML-N party he founded.

His brother Shehbaz became PML-N’s president, but Sharif remains the power behind the throne.

Since then, a host of his allies have been either disqualified by the courts, or face corruption cases.

Many PML-N lawmakers have also defected to Khan’s party.

PML-N has also been riven by internal divisions. Sections of the party oppose Sharif’s combative approach against the army and fear it will turn off voters in a deeply conservative and patriotic Muslim nation of 208 million people.

The kind of reception Sharif receives on the streets of Lahore will be viewed carefully in Pakistan,
where political popularity is often measured by the size of rallies that politicians can attract.

PML-N leaders say authorities have begun a crackdown against union council leaders, the street-level
party workers who bring out people on the streets, detaining hundreds of workers over the last
36 hours.

“Those who think they can scare us…open your ears and hear this: we are winning this election,”
Shehbaz Sharif told newsmen in Lahore on Thursday.

On Friday morning, a bomb blast struck the convoy of Akram Khan Durrani, an ally of Sharif’s PML-N from the religious Muttahida Majlis-e-Amal party (MMA) in the northern town of Bannu, killing four people.

The MMA is expected to challenge Khan’s PTI in the northern Khyber Pakhtunkhwa province in the upcoming polls.

Paul Kagama Jails Family Whose Daughter Might Run Against Him