The new Governor of the State of Osun, Mr Gboyega Oyetola was on Tuesday sworn in as the 5th Executive Governor of the state. Oyetola was administered his oath of office at a ceremony held at the Osogbo Township Stadium by the Chief Judge of the state, Justice Oyebola Adepele-Ojo. In his inaugural address titled…”
Yusuf
featured hero Osun 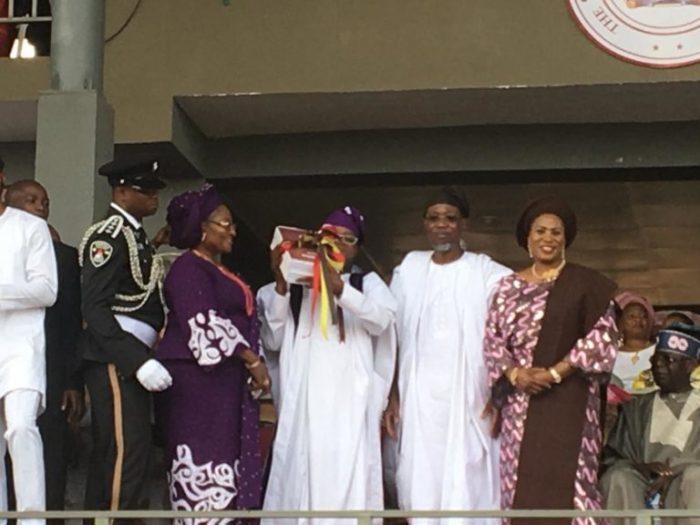 Oyetola was administered his oath of office at a ceremony held at the Osogbo Township Stadium by the Chief Judge of the state, Justice Oyebola Adepele-Ojo.

In his inaugural address titled “A HOPE RENEWED,” Governor Oyetola attributed his electoral victory in the September 22nd gubernatorial election as divine, one that represented the will of God and renewal of hope for good governance in the state. He lauded his predecessor, Ogbeni Rauf Aregbesola for towing the path of progress and development of the state in laying a solid foundation for his administration to build on.

According to him, “We will build on the progress already achieved and we shall do so farm by farm, industry by industry, village by village, school by school, person by person, until everyone in this state feels the beneficial influence of progressive good governance in the most important aspects of their lives.”

“We rest not and quit not. We forge ahead because progress is all we know. Neither defeat nor retreat is for us. We shall learn from the past, yet we shall never be stuck in the past, we shall forge ahead to sustain the hope and greatest good of the greatest number of our people.”

“Let me, at this juncture, point out what will become the defining hallmark of our intervention in governance, in the next four years, namely; a social partnership between government and the people based on the execution of a social contract. We will combine the sagacity of Obafemi Awolowo, the vision of Bola Ige, the wisdom of Bisi Akande, the dexterity of Bola Tinubu and the innovative capacity of Rauf Aregbesola to make our State even greater.”

“We will ensure that workers’ salaries are paid promptly bearing in mind the financial inflow of the state. We shall resolutely defend, extend and prioritise the welfare of workers and pensioners.

“To reposition the economy of our great state, we shall organise the Osun Economic Summit within the first quarter of our first year in office.”

“The multi-stage, multi- stakeholder summit will dissect and recommend strategies which will drive meaningful youth employment, enhance food security, agricultural development, activate mining prospects and boost tourism potentials of this state. We will showcase Osun as a strategic location for industrialisation.”

“We are convinced that the peaceful atmosphere, a welcoming people, low crime rate, communal peace and the relative stability of electricity supply (particularly in the capital city) will attract local and foreign investors.”

“We will develop the free trade zone while strengthening Small and Medium Enterprises (SMEs) as a way to enhance their productive capacity to generate jobs and create wealth. To further boost our local economy and increase the revenue base, we shall make Osun a cultural destination and a tourism enterprise zone in the Southwest. ”

“We shall improve on the Internally Generated Revenue (IGR) of the state in ways that do not bring additional burden to the people. We will make health and education more accessible. Employment opportunities will be created through industrialization and expansion of agricultural activities through appropriate incentives.

“To boost agriculture and food security. Our administration will consolidate on the agricultural land expansion programme (the Land Bank), with additional target of 20,000 hectares to the Land Bank. We will establish nine (9) new farm settlements (one each per federal constituency) while we push forward on our promise to establish agro-industrial parks and produce markets.”

“It is time to create jobs for our youths. We will upgrade our vocational technical institutions to make them more vibrant with the demands of a technology-driven, fast-paced world. We will in partnership with the private sector, establish light manufacturing industries in the major sectors of the economy to create at least 30,000 jobs.”

“We will seek the full development of the proposed mid-regional market hub and establishment of Osun Dry Port through public-private partnership. We will refurbish and expand existing markets in major towns.”

“Our administration recognizes the importance of intra and inter-city roads to facilitate movement of goods and people. We will continue to muster resources to build strategic roads across the state.”

At the event were the Secretary to the Government of the Federation, Boss Mustapha, APC National Chairman, Comrade Adams Oshiomhole, Asiwaju Bola Ahmed Tinubu, Governors of Ondo, Oyo, Ekiti, Lagos, Kano among others.