Kazeem Badmus, Yusuf Oketola PRIMARY and Secondary School students in the State of Osun on Monday resumed for the 2022/2023 academic session.  Some of the school children resumed to the poor teaching and learning environment they left before the last holiday.  Investigations by OSUN DEFENDER revealed that some of the buildings resumed into by…”
Yusuf
featured Osun 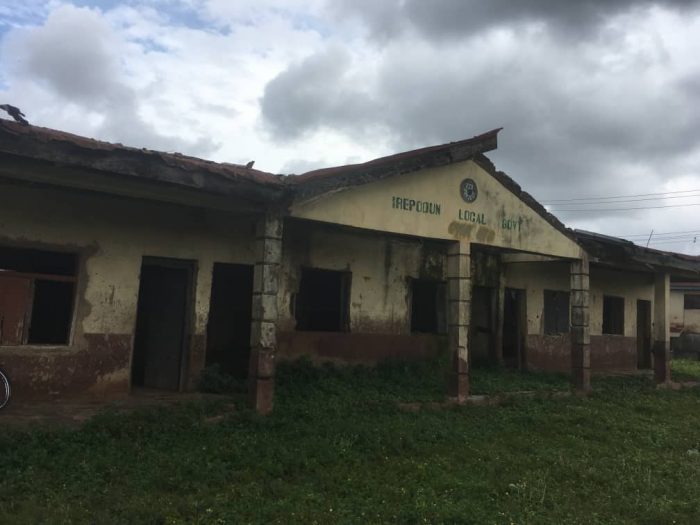 PRIMARY and Secondary School students in the State of Osun on Monday resumed for the 2022/2023 academic session.

Some of the school children resumed to the poor teaching and learning environment they left before the last holiday.

Investigations by OSUN DEFENDER revealed that some of the buildings resumed into by the public school children are dilapidated.

This is just as the schools’ environment were bushy and unkept.

OSUN DEFENDER visited some of the schools in Osogbo, Iwo, Ilobu, Ife, Ilesa and other places on Tuesday and Wednesday.

The medium observed that in some of the schools visited, classrooms and other facilities were near collapsed. The roofs of majority of the schools visited have been blown off by windstorm, with some of the classrooms without doors and windows. In most of the schools visited, the medium noted that the classrooms were in bad shape and in need of urgent intervention.

At AUD Grammar School, Laaro, Ilobu, some of the buildings housing the students had no windows nor ceilings, a situation described by one of the students as pathetic.

According to the student who pleaded anonymity, students suffered anytime there is rainfall or the weather is sunny.

She said: “Our situation is very pathetic. As you can see, our classroom has no door or window. When there is heavy rain with breeze, some of us get drenched. When the weather is sunny, life will be hellish for us as we don’t have ceiling in our class.

“Most of the classrooms are like that and we students believed the government ignored them because our school is at the outskirt of the state.”

OSUN DEFENDER overheard some senior staff of the school directing parents not to enroll their children in the school again because of lack of classroom.

The school has five buildings but only two of the structures were functioning well. A part of the third building was being used as principal office, staff room and two classrooms.

The roofs of some of the classrooms in Fakunle Comprehensive High School, Osogbo, have been blown off by windstorm, giving room for rain to penetrate the classrooms.

The school surrounding was also bushy and in need of sanitation.

At Isale Imole and Aromiwe Community Primary School, Ilobu, some of the school buildings were near collapse.

A teacher at one of the schools who spoke with the medium said the buildings have been unattended to for over three years, calling on the government to see to the renovation of the school on time.

The teacher who do not want his name in print appealed to government at all level to wade-in and rescue the limping public education system of the state.

He said parents have been withdrawing their children as a result of the poor condition of the school buildings.

Salvation Army Primary School, Isokun, Ilesa was lacking chairs for the pupils and the environment was bushy and unkept when visited.

One of the parents who brought her child to school, Akinpelu Olufemi, told OSUN DEFENDER that the deplorable condition of the school has been a source of worry to the parents.

“Most of the classrooms in the school are in bad condition and the school is also short of furniture for the pupils”, she said.

When asked why she enrolled her daughter in the school despite its bad state, the woman stated that she had no financial capacity to register her child at private school.

OSUN DEFENDER also visited Community Primary School, Farm Settlement, Oke-Osun, Osogbo around 11am on Wednesday and observed only a few pupils were in the school.

One of the two school buildings has been abandoned, leaving the other for the pupils.

Only one of the three classrooms in the second building has furniture with a fallen ceiling.

None of the school visited has functioning toilets.

Reacting to the poor state of some of the public schools, a civil society group, Centre for Social Justice and Public Protection (CSJPP), described it as a sad situation which calls for urgent intervention of the government.

The group’s Coordinator, Akin Akanji, in a telephone interview with OSUN DEFENDER berated the state government for showing what he called “I don’t care attitude” to the plight of the children of the common men.

According to Akanji, the sad state of some of the school structures coupled with the lack of furniture and teachers are some of the reasons for the low performance of the state in general examinations.

He said: “This is the sorry state of our public schools and it is a sad situation which calls for concern. The government is not doing much to help the situation.

“How will students who are receiving classes in an unconducive atmosphere passed when competing with others?

“The government has to rise up and look for a way to salvage the situation in order to help the future of the children of common men and the state at large”.

Tap Into Your Areas Of Strength, Badmus Charges Children