Osun PDP To Adagunodo: “You Have Questions To Answer”

The People’s Democratic Party (PDP), in Osun State on Thursday alleged the suspended Chairman of the party, Hon Soji Adagunodo of financial mismanagement. The party however called on him to come and account for hundreds of millions of naira that allegedly disappeared in the party’s account. The acting Chairman of the party, Elder Sunday Akanfe…”
Yusuf
featured Osun Politics 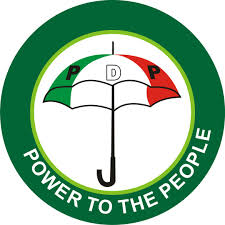 The People’s Democratic Party (PDP), in Osun State on Thursday alleged the suspended Chairman of the party, Hon Soji Adagunodo of financial mismanagement.

The party however called on him to come and account for hundreds of millions of naira that allegedly disappeared in the party’s account.

The acting Chairman of the party, Elder Sunday Akanfe Atidade, who made the call while briefing journalists on the state of the party at the party Secretariat, Osogbo also declared that there was no crisis within the fold of the party.

It would be recalled that the National Working Committee of the party directed Adagunodo to step aside from office pending the outcome of the investigation committee set up to look into allegations of embezzlement of 2018 state governorship election campaign fund, maladministration among others levelled against him by some concerned members of the party.

Pending the conduct of the investigation, an acting Chairman, in person of Sunday Atidade Akanfe was put in place to hold forth.

Flanked by other members of the State Working Committee, Atidade said the suspended Chairman has refused to comply with the directives of the National Working Committee of the party that ordered him to hand over the party affairs to him, hence the need for the SWC in consultation with other stakeholders to obtain the statement of the accounts of the party from Sterling and First City Monument Banks.

According to him, the banks accounts revealed that Adagunodo has spent a huge amount of money with no receipt, voucher and no approval.

“For this purpose, a reputable firm of auditors and financial investigators was engaged, and it was discovered by the auditors that an amount of money running into hundreds of millions of naira could not be accounted for as there were no vouchers, no receipts, no budget and most especially no resolution of the State Working Committee to back up those financial dealings.

Atidade added that a letter has been forwarded to the embattled chairman to come and explain his financial records within two weeks.

He said, “To this effect, a letter has been sent to the suspended chairman alongside the audit report, asking him for explanation. This is fair hearing in our opinion and in line with the principle of accountability.”

“I state it again that in Osun State chapter of the PDP, we have no crisis, as you can see, the entire State Working Committee, State Officers and major stakeholders of our party are here with us at this press conference.”

“I wish to add that there is no crisis within Osun State Chapter of the Peoples Democratic Party. What we are dealing with is the issue of transparency, probity, discipline and accountability.

“Our resolve to put an end to impunity and financial indiscipline within our party are what some of our members have misunderstood and mistaken for crisis within our party.

The acting Chairman revealed that the party has constitued a 15-man committee to gather members’ opinions on participation in the local government election.

“I wish to state that the State Working Committee under my leadership has taken some far reaching decisions in recent times. We have resolved to register with OSSIEC and we have set up a 15-man committee headed by the resourceful and experienced leader of our party Dr. Bayo Faforiji, a former Chairman and former Commissioner in Osun State to gather opinions of members of our great party and come up with recommendations regarding the forthcoming Local Government elections in Osun State.”

Earlier in the week, some concerned members of the PDP held a press conference calling for reinstatement of the embattled Adagunodo on the ground that the investigating committee has exonorated him of alleged campaign fund embezzlement.

According to Seyi Bamidele, spokesperson of the group, the allegation of financial mismanagement is baseless as nobody has pronounced Adagunodo guilty of any embezzlement.

But while reacting to the group, the Acting Chairman of the party, Sunday Atidade debunked the insinuation of rifts within the party adding that issues relating to the suspended chairman are being handled by the party.

According to him, ” PDP in Osun state is one indivisible family , adding that those calling for the reinstatement of suspended Chairman of the party, Hon Soji Adagunodo were doing so out of ignorance.

Sen Adamu calls on Nigerians to vote for PMB