The end may be near for the petition filed by Governor Gboyega Oyetola at the Tribunal sitting in Osogbo, as his star witness, Isiaka Olanrewaju destroyed the arguments of over-voting even as his counsel hurriedly withdrew other two witnesses arising the abysmal performance of the witness from Ila Orangun. Following the indicting confessions of the…”
Olamide
News Osun 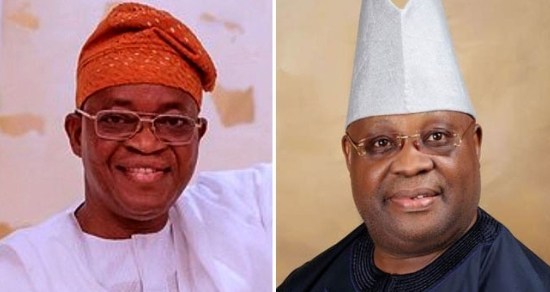 The end may be near for the petition filed by Governor Gboyega Oyetola at the Tribunal sitting in Osogbo, as his star witness, Isiaka Olanrewaju destroyed the arguments of over-voting even as his counsel hurriedly withdrew other two witnesses arising the abysmal performance of the witness from Ila Orangun.

Following the indicting confessions of the star witness, Akin Olujinmi (SAN), the lead counsel for Oyetola made the application to withdraw other witnesses earlier scheduled for today shortly after the panel reconvened from a short break.

Making an oral application, Olujinmi said the petitioner will no longer call the two witnesses in support of its petition and seek the leave of the court to have them withdrawn.

“My Lords, we want to drop the two witnesses we had lined up for appearance,” Olujinmi applied to the panel.

In response, Paul Aganaba (SAN) said Olujinmi had seen the futility of pouring water into a basket, hence the withdrawal of the other listed witnesses.

The actual hearing of the governorship tribunal commenced today with the star witness for the petitioner, Isiaka Olanrewaju practically failing today as he openly, comically and technically disowned many of his own depositions and comprehensively knocking life out of case against the election of Senator Ademola Adeleke as the next Governor of Osun.

The witness proved beyond reasonable doubt that the grounds on which the petitioner built his case is not just weak but unfounded and only served to confirmed that Senator Adeleke was duly elected on July 16th.

The witness who was cross-examined by Paul Ananaba SAN, Alex Iziyon, SAN and Onyechi Ikpeazu SAN spoke against many aspects of his own deposition and accepting clearly that BVAS machines as primary source are superior to BVAS report which are secondary source.

The witness and his many gafe and admissions saw many APC supporters leaving the court room even as a leading counsel for Mr Gboyega Oyetola , Saka Layonu(SAN) left the court room probably due to the embarrassing show from the star witness.

• Claims he Works for Senator Adeleke in Deposition

His first error was the claim in his deposition that he worked for rhe second respondent, Senator Ademola Adeleke. This drew so much drama from the court. The witness to the consternation of the court claimed it was “an error, not a mistake”

• Witness a Staff of Oyetola, so not an Expert

• I did not Compare Form EC8 with Ticking of Voters’ Register

He contradicted himself on the time he secured the BVas report . While his deposition said July 17, he mentioned July 27th. His inconsistency irked the judges.

• Admits he did not cross check the Bvas Machines

The worst of the witness failure was his admission that he did not compare all the documents he had with the primary source of election data which are the BVAS machines. The BVAS report was then based on generated data from a server that does not contain all information on the election outcome.

• Admits that BVAS are the primary Source of Data, while BVAS report is secondary

He proceeded to admit that BVAS machines are the primary source of data for the election. The machines and their contents are superior to the BVAS report generated from the server.

Worst still was the witness’ admission that he did not defer to EG 40 series in his analysis of the results. That gap created big hole in the report of the witness as the ECG form series contain vital final phase data on an election.

•Disown Table of Report by Claiming it is 749, not 762 polling units even after table count

On table of election result computed to show over-voting, the witness was at a loss when he was told that the table he submitted contains 762 units rather than 749 reported by the witness. This generated heated debates among counsel, putting the witness on the spot for more than 10 minutes.

By the time the star witness concluded, he had practically disowned form EC8 series on which the over-voting claim was based as he admitted he is not sure whether the forms are genuine or not.

He also discredited large parts of his own report sworn to under oath.

The Tribunal adjourned hearing till tommorow.

How Intercontinental Bank Wrote Off Billions Of Naira For Saraki, Father – EFCC