By Abiodun Komolafe In a few days’ time, Osun will be organising an Economic and Investment Summit to “redirect and recommend strategies which will drive meaningful youth employment, enhance food security, agricultural development, activate mining prospects and boost tourism potentials” of the state. While a summit of this nature and relevance is auspicious, especially, at…”
Yusuf
featured Op-Ed 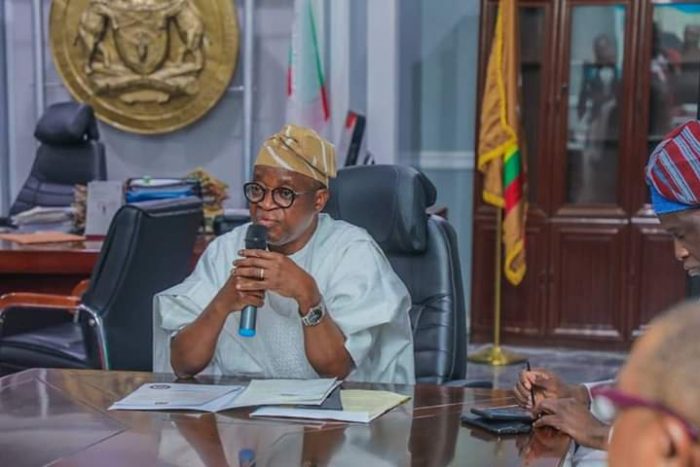 In a few days’ time, Osun will be organising an Economic and Investment Summit to “redirect and recommend strategies which will drive meaningful youth employment, enhance food security, agricultural development, activate mining prospects and boost tourism potentials” of the state. While a summit of this nature and relevance is auspicious, especially, at a time revenue accruing to the state is said to be having excruciating strains on the finance profile and obligations of the state, the fact of the matter is that governance globally is a serious business and not a glamorous show of the circus!

As should be expected, Economic Summits are for the egg-heads: focused, serious-minded, goal-getter people with proven track records in the society. They are not done for crass reasons or merely to facilitate ‘jeunjeun’ rendezvous for the boys! Besides, economic realities in the global market and how they have affected Nigeria have taken governance and economic issues beyond how to create wealth alone. They also include, if not more importantly, how to judiciously appropriate scarce resources!

Osun, like most states in Nigeria, is cruising through trying times financially, and all eyes can see it! There is palpable inefficiency in every sector of the domestic economy and it cuts across board. With a population that is aggressively climbing towards 5m, to say that Osun is yet to attain the majesty of its economic potential, despite the abundance of resources available to it, is certainly a misnomer. The truth is: it has not even taken-off! So, what exactly is this seeming endless ritual about and what does it hope to achieve to ensure that Osun does not sink?

For this writer, there are big issues on ground to be addressed for any summit of the shape and size being contemplated by the state to be meaningful. So, it will do the organisers a great deal of good if they focus their attention more on the ball, not to embellish it with a diet of tricks that will only end up portraying the participants as being busy for the sake of being busy, signifying, and achieving nothing!

The summit should generate ideas and bring up recommendations which will help government reduce deficit and put smiles on the faces of the private sector operating in the state. Its beauty should be something that speaks eloquently to the economic self-sufficiency of the state, interrogate poverty reduction issues, catalyze sustainable development and proactively address topical issues like entrepreneurship, economic growth and foreign direct investment.

To be honest, Osun has its peculiarities. It is agro-based. Though the state has, in recent history, moved from a public service economy back to its rightful place as an agricultural state that does not mean it should practically go to sleep. The gospel of development doesn’t work that way. Essentially, therefore, the proposed summit must come up with lasting strategies that can support partnerships in agriculture and guarantee investments in food security. In a state where 70 per cent of its population is farmers, it is desirable that Osun contributes meaningfully to Nigeria’s exit from the comity of ‘high rate of unemployment’ nations of the world.

Mining is one of the world’s fastest growing sectors. Unfortunately, its development in Osun has become an object of platitudes and abandonment. Now that the government is talking about encouraging, attracting and establishing light manufacturing industries in the major sectors of the economy, mining is one sure way to go, particularly, taking into consideration its labour-engaging capacity. Mpumalanga (South Africa), Dingi-Dongi (Indonesia) and Toronto (Canada) have shown that the economic impact of mining transcends the realm of mineral extraction and processing. But then, mining has to be real, especially, now, that Nigeria’s unemployment rate stands at 26%.

Next on the list is the Land Use Charge. Of course, the Surveyor-General has a lot of work to do in this area. The unseen hand driving Land Use Charge is principally tied to the dynamics of the domestic economy and the Demand and Supply profile of Land Use in the society. An unreasonable charge and tax assessment will only portray the government as unreasonable, and the concocted charge as ‘taxation without representation.’ Fundamentally, urban renewal programmes have to be hinged on a development plan that will partition or re-partition the land parcels available to the state. It doesn’t matter that this may cost the state a huge amount of money. The reality on ground is: if there is no money in Abeere, there certainly can’t be money in Osun!

Good that Osun has vowed to improve on its Internally Generated Revenue (IGR) “in ways that do not bring additional burden to the people.” But, the truth that no government wants to deal with is that people don’t naturally wish to pay taxes; and for good reasons too! For the orientation to change, this government must be seen to be frugal, accountable, and seldom use public money on reckless experimentation in the guise of ‘unproven’ innovations. Furthermore, government should not deceive itself into thinking that whatever accrues into its pocket in form of IGR can provide the needed succour to the already-overburdened populace. The more reason it must strive to retain the people’s confidence, principally, through commitment to policy statements and actions that will lawfully encourage a shore-up in the state’s IGR.

Going by the abundance of resources available to the state, one can safely say that the future of Osun lies in the Tourism and Travel sector. If properly harnessed, this sector is noted for bringing about policies and programmes that can promote the government and portray Osun as a tourism hub. But this is a nothing-ventured-nothing-gained investment. In other words, a government that fails to invest in Tourism should not expect to get anything in return.

Economic insecurity leads to animalistic instincts. This brings us to another area of interest: Estates and Home Making. While one hopes to return to this important sector at a future date, it is perplexing that some 200 housing units are currently wasting away in a Federal Housing Estate in Osogbo while those in government remain practically unsympathetic to the people’s plight.

May the Lamb of God, who takes away the sin of the world, grant us peace in Osun!

JUMAT SERMON: Let Us Turn To Allah In Repentance