The citizens in the State of Osun has lauded the effort of the State Government lead by Governor Rauf Aregbesola for his unwavering effort in ensuring peace and banishing every threat to the State security. This is coming on the backdrop of release by the National Bureau of Statistics, naming Osun as one of…”
Editor
hero News Osun 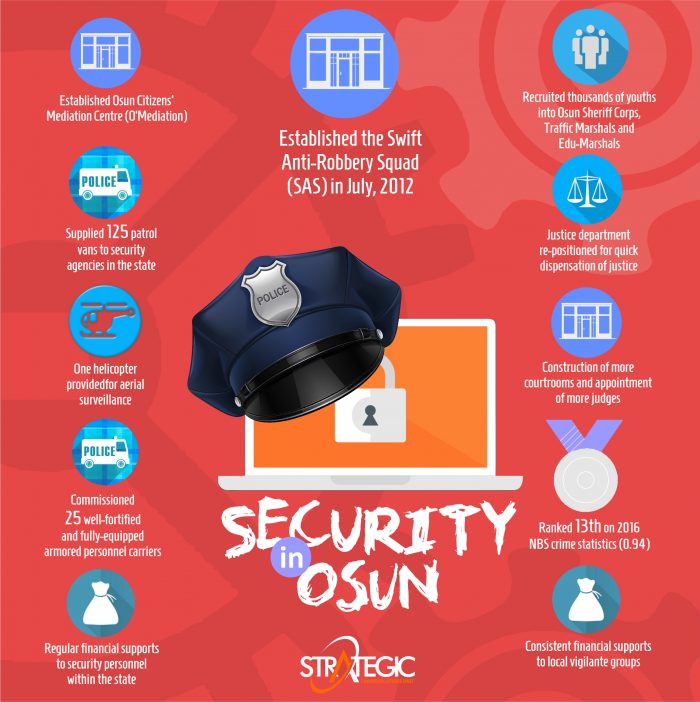 The citizens in the State of Osun has lauded the effort of the State Government lead by Governor Rauf Aregbesola for his unwavering effort in ensuring peace and banishing every threat to the State security.

This is coming on the backdrop of release by the National Bureau of Statistics, naming Osun as one of the safest state in Nigeria. The citizens our correspondent spoke with hailed the government at several towns and villages across the State during an interview about the status of security in their different area of living.

A resident of Onward area, Osogbo, Tijani Lukman glorified security personnel for the excellent work done to ensure peace in the state.

He said “There is peace in my own community which I believe is a reflection of how everywhere is in the state, if the story was different, we would have read it on the pages of newspapers or seen it on television.

While speaking to our correspondent, a female resident of Ilesha area of the state, Ibrahim Oyindamola, noted that since her relocation, she has witnessed unabated peace and quiet and gave kudos to the government and the police for a job well done.

She said, “Osun State is a cool place to live as far as I am concerned because where I come from I never experienced it this way. I have never been robbed or molested since I relocated for the past few years.”

However, another citizen Habeeb Salami said “there is no way whereby bad people won’t exist in our communities but if you listen to radio and read newspaper you will see that they are been brought to book which shows that the state has no tolerance for such and make me to think that our judicial system in the state is working effectively.

“The state government didn’t achieve this by mere words but also adequate provision of ammunitions for the securities to conquer ritual killing, theft and cultism in the state.

“A brother of mine is a Police officer who always lauds the government in the role they are playing to ensure that their own life is safe and insured while ensuring other people’s security.

The people’s view in lauding the government corresponded with the National Bureau of Statistics ranking which Osun as one of the most secured state in the country.

It was learnt that for the State government to achieve this feat, it established Osun citizens meditation center known as O-meditation, supplied of 125 patrol van to security agencies, provision of an helicopter for aerial surveillance, regular financial supports for both local vigilante group and other security agency, provision of 25 fully equipped armoured personnel carrier; recruitment of thousands of youth into Osun Sheriff corps, traffic marshals, Edu-marshal were among other things done by the State.