For alleged gross misconduct, the Baale of Eko-Ajala, in Ifelodun North Area Council, Osun State, Chief Sunday Abimbola Akinwale has been sacked over alleged gross misconduct. Akinwale was found guilty of an allegation levelled against him that he was receiving double salaries as the Baale of Eko-Ajala as well as a civil servant of the…”
Yusuf
featured Osun 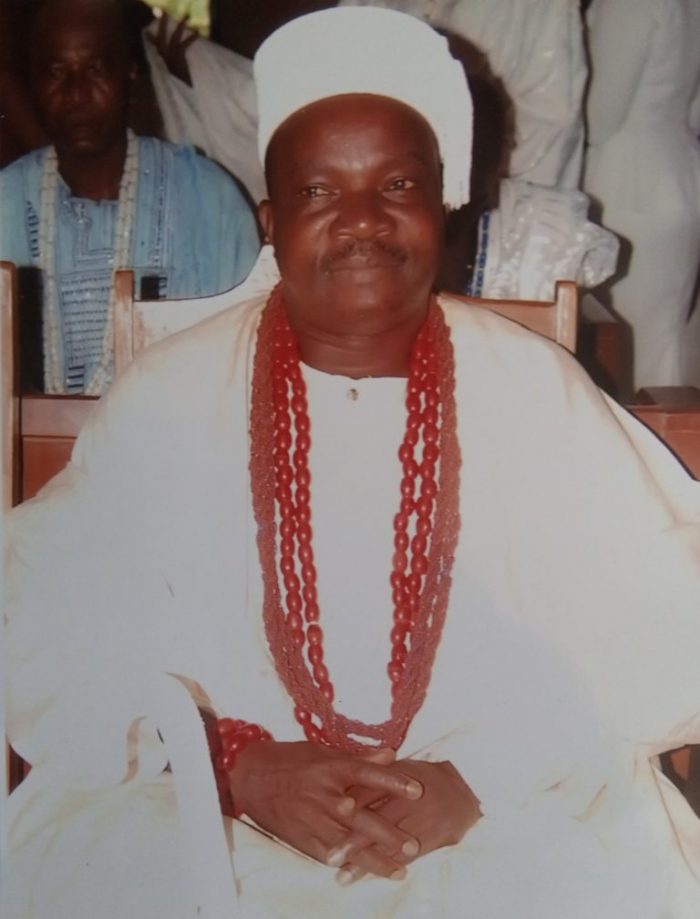 Akinwale was found guilty of an allegation levelled against him that he was receiving double salaries as the Baale of Eko-Ajala as well as a civil servant of the local government.

The decision was taken following his refusal to respond in defence of those allegations slammed against him.

His sack was contained in a letter signed on 27, May , 2020 by the Prescribed Traditonal Authority of the area, the Eleko of Eke-Ende, His Royal Highness, Abdul Rauf Adebayo Olaniyan Ajiboye.

In a letter sighted by our Correspondent in Osogbo, the ousted traditional Chief was accused in a petition written by one Hon Prince Ibrahim A. Aroyehun and Prince Ademola Abioye to the office of Auditor General for Local Government of financial misconduct of collecting double salaries from the purse of the state government

Signed by O.O Olaniyi (Mrs) Director Traditional and Special Account for Auditor General for local governments, Osun State, which was addressed to The Chairman, Ifelodun Area Council, Iba, the unseated Chief Akinwale was found wanting of collecting double salaries from the purse of the state having failed to respond to the allegations at the stipulated time.

According to the report, Chief Akinwale as at the time of his appointment as traditional chief in November, 2016 he was still a full time staff of Ifelodun Area Council as Principal Work Superitendent GL 12 in the works Department of the local government.

The offence according to the report contravened Public Regulation in the State of Osun( Section (3) Misconduct) Rule 03030316(q) which prohibit a Civil Servant from accepting a Chieftaincy title or collecting salary while still in service without resigning from Government Service.

” As a result of the allegation , a letter was written to Chief Sunday Abimbola Akinwale to explain why discplinary action should not be taken against him for an act of gross misconduct punishable under the Public Service Rule within seven days of receiving the letter. He has not responded to the letter to date of issurrance of this report. He refused to response to the Auditor General for Local Government Directive.

The office of Auditor General had however in a letter written to the Chairman, Ifelodun North Area Council, Iba dated January 23, 2020 demanded for the evidences of the attendance and performance of the sacked Chief that would justify payment of his salary to him between the period of November, 2016 to May 2019.

The response of the Council Manager, Pharm Aruna Ojo Rasaki on behalf of the Executive Secretary of the area Council was that” From the record available Mr Sunday Abimbola Akinwale collected Salary from the area Council till May 2017 while the record of attendance available started that from 1st of October , 2017 to 24 June 2019, he did not come to the office.

It was also stated that the local government Service Commission officially approved the withdrawal of his service on 24 June 2019. All these testify to the fact that he collected double salary between November 2016 to May 2019″ the report stated

“Considering that Chief S. Abimbola resigned voluntarily from the service by May 2019 he has to refund the overpayment of #1,636,386.48 been total amount of salary received as staff of the Local Government between November 2016 and May 2019, immidiatly. Moreover,he should explain why disciplinary action should be taken against him for engaging two full time appointments with the local government, and received two full salaries between November 2016 to November 2029.

Following the report of the an audit to the petition received by the Office of the Auditor-General for Local Governments which indicted the Chief Akinwale for fraudulently holding two salaried appoiappointment, Oba Ajiboye , the Eleko of Eko-Ende who is also the prescribed authority removed him saying his indictment as such renders him unfit to continue to hold the exalted offi e of Baale of Eko Ajala.

Installing new Baale on Thursday, the Eleko of Eko-Ende said said Alfa Soliu Olayemi was installed following his sterling performance in the screening exercise conducted by the Kingmakers of Eko-Ajala for the selection of a new Baale Ajala after the death of Baale Ademo Adegboye  sometimes in 2016.

The new Baale of Eko Ajala who came to the palace of Eleko of Eko-Ende with hundreds of his people where the installation ceremony took place with total observation of Social distancing Directives of the Government due to covid-19 promised to toe the path of his forefathers so as to ensure that the peaceful coexistence between the sleepy Communities remained untampered.