Yusuf Oketola THE Omoluabi Rehabilitation Centre located in Ilobu, Irepodun local government area of the State of Osun, is now a shadow of itself, investigation has revealed. Established in the year 2012 by the administration of Ogbeni Rauf Aregbesola, the program was targeted towards rehabilitating and catering for persons with mental challenge, destitute and…”
Yusuf
featured hero Osun 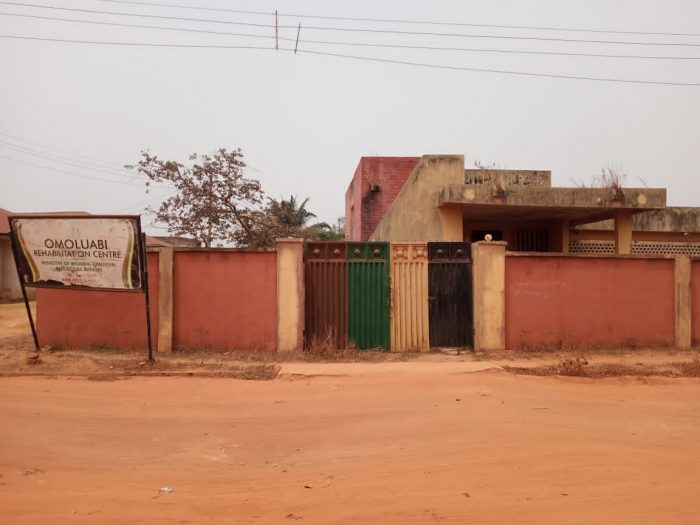 THE Omoluabi Rehabilitation Centre located in Ilobu, Irepodun local government area of the State of Osun, is now a shadow of itself, investigation has revealed.

Established in the year 2012 by the administration of Ogbeni Rauf Aregbesola, the program was targeted towards rehabilitating and catering for persons with mental challenge, destitute and those who are homeless.

The rehabilitation centre, according to findings by OSUN DEFENDER, served as a temporary shelter for destitute transferred from another states for reintegration with their family.

OSUN DEFENDER visited the O’Rehab centre in Ilobu on Wednesday and noticed the place was under lock and key and there was no sign of being used again.

Investigation also revealed that the O’Rehab served as a skill acquisition centre for those who have been fully treated of their health challenges.

Destitutes and those with mental health challenges were being taught different skills, coupled with empowerment programmes before reuniting them with their family so as to make them financially independent.

The programme lasted for eight years of Aregbesola’s administration. The last set of people who were treated in the place were said to have been reunited with their family in the year 2019 during the early stage of Governor Adegboyega Oyetola’s administration.

However, the place has been shut down since then, as the Oyetola’s administration has failed to continue the programme.

In an exclusive interview with OSUN DEFENDER yesterday, a former Special Adviser to Governor Aregbesola on Youth, Sports and Special Needs, Comrade Biyi Odunlade noted that the strategy and approach of Oyetola’s administration to social welfare issues is an aberration and against all logic of social programmes.

Odunlade stressed that the Oyetola’s administration has abandoned all laudable projects embarked upon by the previous administration, adding that all social programs in the state are now a story of the past.

He said: “The Omoluabi rehabilitation centre at Ilobu was established in the year 2012 by the administration of Ogbeni Rauf Aregbesola.

“The Destitute Rehabilitation was total a rehabilitation centre established by Aregbesola’s administration for the purpose of temporarily shelter for destitutes transferred from other state for reintegration with their family.

“It was also used as a transition place for person with mental imbalance that were  picked of the street. While processing them for hospital, they are temporarily put there and after they were discharge from the hospital and awaiting to reunite with their family, they will be there until their family comes. And for those who do not have families, they will be taken care of till solution is gotten regarding their relocation as to whether to get them a place to live.

“On regular basis, that place was also serving as a skill acquisition centre for person’s with disabilities, persons with mental challenge after their rehabilitation. Generally, persons who need skill acquisition and empowerment are gathered there and are trained in different trade before they are being returned to where they will be joined with their families so that they will not to be dependent on anybody.

“The impact of the program on the society was very huge. The program started in 2012 and it continued till 2018 and since the present government did not put in any premium in rehabilitation of destitute, the place has been abandoned.

All effort to get reaction of the state government proof abortive as the Commissioner for Women, and Children Affairs, Olubukola Olaboopo failed to pick calls nor reply text message sent to her as at the time of filling this report.

How Oyetola’s Govt. Clamped Down On Me Because Of My Loyalty To Aregbesola – AARAJ