Ismaeel Uthman THERE seems to be no automatic ticket for Governor Adegboyega Oyetola in the All Progressives Congress (APC) for the 2022 governorship election in the State of Osun. Oyetola may have to slug it out again with three of the governorship aspirants who contested the ticket of the party with him in 2018. …”
Yusuf
featured hero Osun Politics 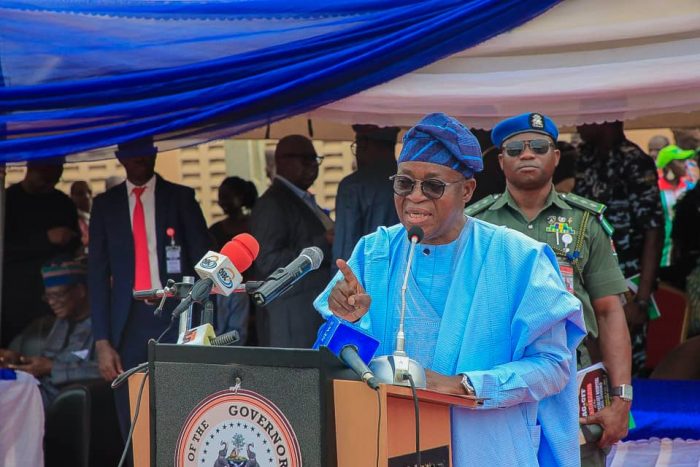 THERE seems to be no automatic ticket for Governor Adegboyega Oyetola in the All Progressives Congress (APC) for the 2022 governorship election in the State of Osun.

Oyetola may have to slug it out again with three of the governorship aspirants who contested the ticket of the party with him in 2018.

This is just as the immediate past Deputy Speaker of the Federal House of Representatives, Rt. Hon Lasun Yussuff declared interest in the 2022 gubernatorial election under the APC.

OSUN DEFENDER also gathered that former Secretary to the State Government, Alhaji Moshood Adeoti and former Speaker of the State of Osun House of Assembly, Rt. Hon. Najeem Salaam are also aiming to clinch the ticket of the party.

It would be recalled that the trio of Yusuf, Adeoti and Salaam contested to be the flagbearer of the APC in 2018 before Oyetola emerged through direct primaries.

But Adeoti did not wait for the APC primaries, alleging that it was schemed to favour Oyetola who was the least popular among the aspirants.

Adeoti defected to the Action Democratic Party (ADP) where he contested the governorship election and polled 49,743 votes.

He returned to the APC in 2020 after much pressure on him by the Minister of Interior, Ogbeni Rauf Aregbesola.

However, Salaam who was second to Adeoti in the struggle to zone the APC governorship ticket to Osun West Senatorial District then, participated in the primaries and came third, after which he worked for the emergence of Oyetola at the September 22, 2018 gubernatorial election.

Salam was accused of betraying the ‘West Agenda’ by supporting Oyetola in 2018.

Incidentally, things have fallen apart with Oyetola and Salaam as the later has been sidelined in both government and party affairs.

OSUN DEFENDER reliably gathered that both Adeoti and Salaam will contest the governorship ticket of the party with Oyetola in 2022.

But none of them has come out to declare his intention as the former speaker of the Federal House of Representatives did during the 2021 Ilobu day two weeks ago.

Lasun had on Saturday, November 13, declared that he is interested on the 2022 governorship election on the platform of the APC.

He said: “With love for our state and a fierce commitment to a vision of rapid progress for Osun where the incumbent had been seen to pass the bulk instead of concentrating in further development of the infrastructure which foundation have been hugely laid by his predecessor.

“Without the spirit of continuity, had prompted me to want to come and make great amendment. Government is not about wearing caps, it is about understanding of what is need to be done to banish the scourge of poverty completely in the midst of our people.

“It is with this conviction and some other rudiments of application of political knowledge that I offer myself to serve my dear state once again.”

Yussuff had also during the meeting of Osun APC Elder Caucus (Agba Osun) reportedly told the party’s elders that he would contest the governorship election, a declaration that did not go down well with some of them.

When contacted, Alhaji Moshood Adeoti was not available for comment, same with former speaker, Salam.

However, one of Adeoti’s aide who spoke with OSUN DEFENDER under condition of anonymity yesterday said: “Alhaji is interested in the governorship ticket. He is going to contest and he will lead the Osun West Agenda again.

“You know what is happening in our party. You know we cannot win any election with the current situation. It has gone worse from what we had in 2018. APC should choose its governorship candidate from the West if we want to win in next year’s election.”

Speaking with the medium in a telephone interview, one of the leaders of Iwaloye Campaign Structure, said the Ejigbo born politician will contest the governorship ticket of the party with Oyetola.

The APC chieftain who did not want his named mentioned said: “APC’s best bet in 2022 is Rt. Hon Najeem Salaam. He is interested and will contest the APC ticket with Oyetola. You know he is a popular man and a consistent politician. If APC wants to win 2022 governorship election, it should pick its candidate from Osun West. Anything short of that will amount to exercise in futility.”

According to the National Secretariat of the APC, sale of forms for the governorship aspirants began on November 18, 2021, a development that signaled commencement of electioneering campaign within the party.

It would be recalled that the Independent National Electoral Commission (INEC) had earlier released scheduled July 16, 2022 for the poll.

Group Calls For Zoning Of Gov. Ticket To Osun West

A Non Governmental Organisation, Good Governance Initiative, has renewed calls for the zoning of the governorship ticket of all political parties to Osun West Senatorial district.

The group, in a communique issued at the end of its meeting on Friday, November 12, 2021, said the principle of fairness should be applied to the 2022 governorship election by zoning the ticket to Osun West.

Signed by its State Coordinator, Ayankoya Ayankola, the communique reads: “In the forthcoming 2022 Osun gubernatorial election, the GGI Osun Chapter sues for peaceful conducts of all stakeholders and political parties that will participate in the process of the all-important election.

“The reason being that there has been an agitation for a shift of baton to Osun West senatorial district since the 2018 gubernatorial election.

“GGI, therefore, reiterated that for equitable participation and political inclusiveness by allowing Osun West to produce the next governor of the state, and that this should be the focus of all political parties and all well-meaning citizens of the State.

“This will bring a sense of belongingness and harmony and douse the agitation for a while. At least what is good for the goose is sauce for the gander, a serious campaign should be mounted to drive home this brazen marginalisation of citizen of Osun West district.”

Only Candidate From West Can Win Election for APC – TOP

Also, members of the APC who belong to The Osun Progressives TOP caucus of the party have noted that the party could only win the 2022 governorship election if it chooses its candidate from the West Senatorial District.

According to the group, an unbiased political strategist would know that the APC’s lifeline in the forthcoming election is an emergence of candidate from the West.

Speaking with OSUN DEFENDER, Chairman of The Osun Progressives, Reverend Adelowo Adebiyi, said it is true that majority of the APC members are clamouring for the governorship ticket of the APC to be zoned to West, stating that the clamour is rational and welcome.

Adebiyi said it is the desire of the APC members and that of the TOP leadership to ensure that the APC wins next year’s election, saying that is why the APC governorship candidate must come from West Senatorial District.

He said: “The clamour for West to produce the next governor is true and genuine. It is the desire of the APC members and that of us in TOP to ensure that our party wins next year’s election. That is why we agree with the people that the party’s governorship candidate should come from West.

“This is not a gang up against Governor Oyetola, No. The Governor has the right to seek for re-election and the party must provide a level playing ground for all governorship aspirants.

“The leadership of TOP agrees with majority of APC members in Osun that our candidate must come from Osun West Senatorial District for the 2022 governorship election.”

I’m Unshaken, God In Charge Of My Second Term – Oyetola

Governor Oyetola had said that he was not afraid of any political gimmicks going on to truncate his second term ambition, saying his re-election into the office is in God’s hand.

Oyetola stated this last Friday while addressing some of his loyalists who went to welcome him to the state at Ikire after a London trip.

The Governor restated his belief in God for his re-election, maintaining that he remains unshaken as he put his faith in God who decides all things.

He described the political game in the state as normal, stating that APC remains a formidable force in Osun as the July 16, 2022 governorship election draws nearer.

Oyetola enjoined all eligible voters in the state to participate in the ongoing voters’ registration so that they would be able to exercise their civic rights in the election.