By Goke Awoyemi Antagonists of the continuous existence of the State Independent Electoral Commissions in Nigeria have been vindicated with the recently conducted local government election in Osun State. This is because this commission is always at the mercy of sitting governor, who uses the electoral body to satisfy his whims and caprices, hence the…”
Yusuf
featured Op-Ed 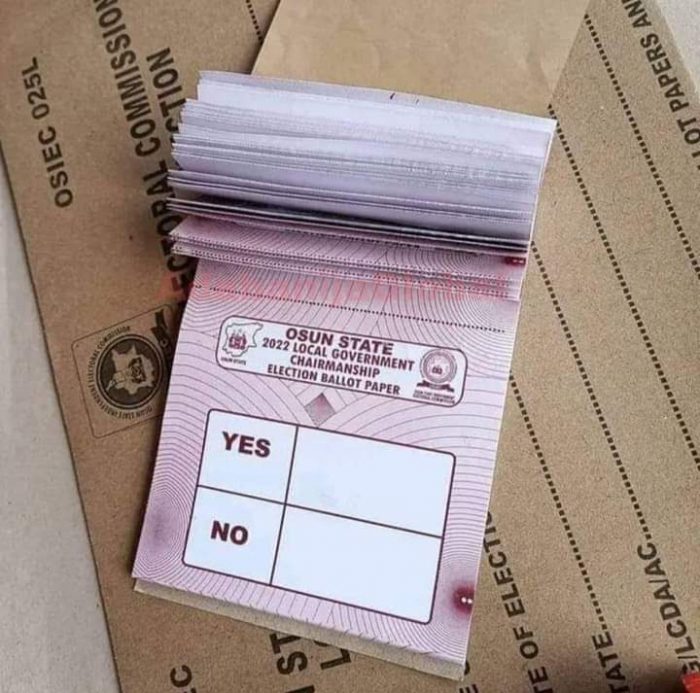 Antagonists of the continuous existence of the State Independent Electoral Commissions in Nigeria have been vindicated with the recently conducted local government election in Osun State. This is because this commission is always at the mercy of sitting governor, who uses the electoral body to satisfy his whims and caprices, hence the fervent call for local council elections to be conducted by Independent National Electoral Commission (INEC). Political observers and analysts have noted with dismay that the State Independent Electoral Commission has always manipulated the outcome for sitting governor. It has further exposed the hypocrisy of the ruling party, All Progressives Congress (APC) and threat to promote crisis in Osun State, thus making the state ungovernable for the Governor-elect, Senator Nurudeen Ademola Adeleke. It is also on record that since the administration of Governor Adegboyega Oyetola came into existence about four years ago, it never saw the value inherent in conducting election at the local government level, until barely six weeks to the expiration of his tenure. Perhaps the APC and Oyetola are ignorant that the moment a winner emerges in any election, all actions taken by the incumbent are at the mercy of the incoming government. What they ought to be busy doing is preparation of hard-over notes to enhance a peaceful transition.

Intra-party advisory committee which comprises all registered political parties in Osun State reiterated on Friday preceding the election that it will not be fielding candidate for the election. Although IPAC Secretary, Dr. Tosin Odeyemi, did not advance any reason for their action, he was quoted to have said “we are going to participate as indigene of Osun but we are not going to field candidates”. Corroborating this, the Chairman, Osun State Independent Electoral Commission, Segun Oladitan, also said that just a party will participate in the poll. The candidate of Social Democratic Party in the last governorship election, Mr. Goke Omigbedun also lambasted the State government for declaring Friday preceding the election as holiday in an unpopular election with only APC participating. He was quoted to have said, “no contest, no rivalry an expensive wastage of Public resources, just one party show”.

The most humiliating aspect of the charade called election was an attempt to kill a journalist at a Collation Centre in Osogbo. Hammed Oyebade, a correspondent with Daily Trust Newspaper had managed to get into a local government collation centre at Awosuru area in Osogbo, the state capital, after some members of APC prevented journalists from accessing the place. Narrating his ordeal Oyebade said: “They said I should not cover the election. I attempted to educate them that they don’t have the authority to dictate to me, but they didn’t listen. They attempted to seize my phone and threatened to kill me.”

At the inauguration of the elected officials that would serve as Chairmen in the 30 local government and 39 Local Government Development Areas in Osogbo, Governor Oyetola charged them to fulfill promises they never campaigned for. He also pointed out that the swearing-in signals the end of service of those appointed into caretaker committees at the local government level. The irony of it is that those sworn-in were those that served in the last Caretaker Committees.

Immediately after, Osun APC started threatening the Governor-elect, Senator Ademola Adeleke with impeachment, should he attempt to dissolve the local council after his swearing-in on November 27, 2022. Adegoke Ogunsola, APC Legal Adviser issued the threat in response to enquiries from journalists about the potential dissolution of the elected Chairmen and Councilors of the ruling party by the Governor-elect. He explained further that any governor who dissolves elected local government is guilty of an impeachable offence.

The Nigerian political space and its actors reminds me of African-American ex-President, Barracks Obama, who said, “immediately after casting my ballot in any election in the United States, I head straight to long tennis court…” This implies that those elections were devoid of foot-soldiers that engage in ballot box snatching and all the shenanigans associated with Nigerian elections. But in the last Osun governorship election that was devoid of (wuruwuru and mago-mago) rigging, the APC is trying to look for a backdoor to get back to power, through the paraphernalia of office, hence this impeachment plot for a Governor that has not been sworn in.

(Ceteris Paribus) All things being equal, the Osun Governor-elect, Senator Nurudeen Ademola Adeleke will be sworn-in on 27th November, 2022 by His grace. The people of Osun are waiting.

Bola Ige Wanted To Resign Before He Was Killed – Akande