By Sola Jacobs It was a scene to behold in Ile-Ife on Tuesday, as people of the ancient town trooped out in their large numbers to welcome the campaign team of the All Progressives Congress (APC) led by Governor Rauf Aregbesola ahead of the September 22 governorship election.  The team had earlier visited the palace…”
Yusuf
featured Osun 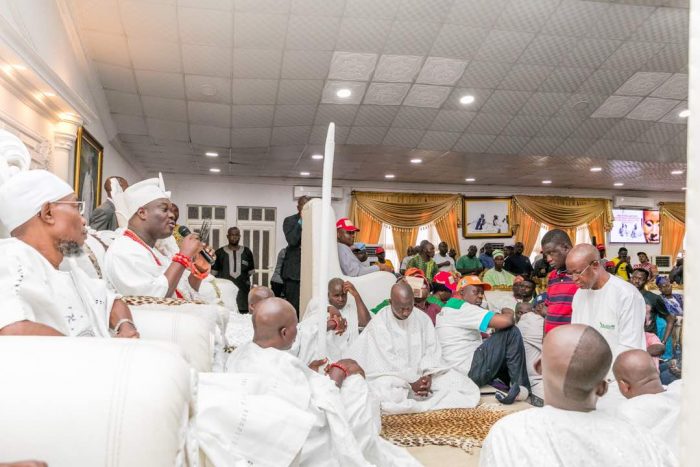 It was a scene to behold in Ile-Ife on Tuesday, as people of the ancient town trooped out in their large numbers to welcome the campaign team of the All Progressives Congress (APC) led by Governor Rauf Aregbesola ahead of the September 22 governorship election.

The team had earlier visited the palace of Ooni of Ife, Oba Enitan Ogunwusi, where the royal father blessed the APC gubernatorial candidate in the forthcoming September 22 election, Alhaji Gboyega Oyetola.

The Ooni of Ife while addressing the people at his palace expressed confidence in the candidature of Alhaji Gboyega Oyetola, saying he believes the party cannot make a wrong choice because Aregbesola has done well for Osun.

Oba Ogunwusi who congratulated Aregbesola for successfully steering the ship of Osun in the past eight years, noted that what the state needs now is someone who has the capacity to build on the legacies of the outgoing governor.

He said Osun has witnessed tremendous development to the extent that no one will wish for it to stop.

“We thank God for our state because this man called Rauf Aregbesola has been able to lay the foundation for the rapid development of our state and it must be sustained by the coming government”, the royal father stressed.

In his remarks, the APC flag bearer, Alhaji Gboyega Oyetola promised to continue the building of Osun into one of the strongest economies in Nigeria which Aregbesola has laid a foundation for.

He highlighted sectors such as education, agriculture, infrastructural developments among others as the areas which his government will build upon if elected into office, saying he has all it takes to take over from Governor Rauf Aregbesola.

According to him, “by the grace of God, there is nothing that has happened in this government in the past eight years that I don’t know about, I know how and where to start my assignment immediately I get into office if elected.

“I want the people of Osun to take the advantage of the fact that I am not new in the system, with me by the grace of God things will work more smoothly.

“I know the direction which Osun needs to turn to at this point in time and I already have the development plans for Ile-ife and other parts of Osun.

“Aregbesola has laid the foundation for the development, we don’t have any other choice than to build on that solid foundation, a vote for the APC is a vote for the continuity of good governance in Osun”, Oyetola stressed.

Addressing the mammoth crowd at the Technical college ground along Ifewara road, venue of the mega rally, Governor Aregbesola assured the people of the state of the continuity of good governance if the APC candidate is elected into office.

Aregbesola pointed out that while his tenure his winding down, the best candidate that can be trusted with the job of moving the state forward is Alhaji Gboyega Oyetola whom the party has picked through a direct primary.

“Alhaji Oyetola is someone who has all it takes to move this great state of ours forward from where we have taken it to, he has the capacity to deliver.

“He is a cool-headed fellow who has all it takes to govern a state like Osun and we will not be mistaken to vote him as the next governor of Osun. We should be very careful not to jeopardize our chances of moving this state forward.

“We should be careful not to allow those who don’t meant well for us and the future of our children to get into office as the governor of our dear state. Our future generation will not be happy with us if we allow wicked people back in government”, Aregbesola emphasised.

As the All Progressives Congress (APC) flagged off its gubernatorial campaign, the people of Ile-Ife turned out enmass to show their support for the party on Tuesday.

The supporters of the party who adorned themselves with various T Shirts, Fez cap, different Aso ebi with inscription “Ifeland for Oyetola”, “I stand tall for G.O” and “Continuity for progress” among others started trooping to the Technical College ground Ilode as early as 8am, while others converged at Enuwa Square awaiting the incumbent governor and the gubernatorial candidate of the party, Alhaji Gboyega Oyeola.

Some of the party supporters who spoke with the medium enumerated the achievements of the party, such as building of state-of-art schools, empowerment of women, youths and people living with disabilities.

Also, they commended the party for peaceful atmosphere since 2010 till date and the security of lives and properties in Ifeland, which according to them were not there prior to 2010.

Also, many electorate, who are not party members but spoke with this medium said that though there is economic challenge in the country, but the administration of Ogbeni Aregbesola had cushioned the effect through social welfare programme of the party in the state such as O’meal for pupils in elementary schools and the Agba Osun scheme which had been giving stipends to indigent elderly people.

The residents of the city therefore declared their support for the APC in the forth coming election, adding that it is the only party that takes care of the less priviledge in the society through its various programmes.

They therefore called on the party gubernatorial candidate, Alhaji Gboyega Oyetola to continue with the laudable programmes of Ogbeni Aregbesola when elected especially the OYES Progamme and the support for Cocoa farmers, which is the main produce of the Ife people and provision of infrastructure, such as good roads network in Ile-Ife and its environs.