It’s no longer news that Mr. Babajide Sanwo-Olu is the certified flag-bearer for the All Progressives Congress (APC) in the coming gubernatorial election in Lagos State. And to further assuage thoughts on any irreconcilable differences that could be exploited by the opposition party, the incumbent governor, Mr. Akinwunmi Ambode, who was Sanwo-Olu’s main rival in…”
Editor
Op-Ed 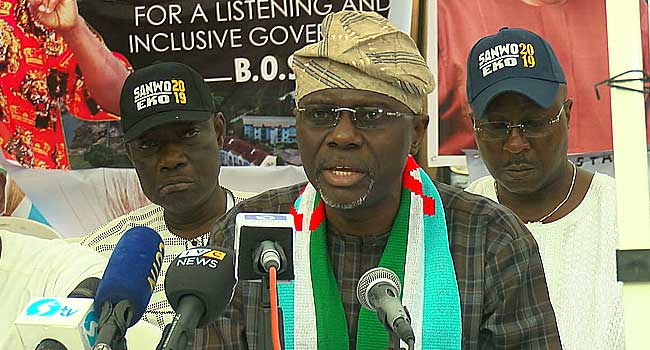 It’s no longer news that Mr. Babajide Sanwo-Olu is the certified flag-bearer for the All Progressives Congress (APC) in the coming gubernatorial election in Lagos State.

And to further assuage thoughts on any irreconcilable differences that could be exploited by the opposition party, the incumbent governor, Mr. Akinwunmi Ambode, who was Sanwo-Olu’s main rival in the primary election that resulted in Sanwo-Olu’s emergence, has pledged his support for Sanwo-Olu’s success in the coming election.

Notably, this has further stimulated the spirited Babajide Olusola Sanwo-Olu Campaign Organisation (BOSCO), an assemblage of old and young politicians and professionals who are committed to elevating issue-based campaign and bringing innovation like never before to the electioneering process.

As a matter of fact, Sanwo-Olu needs all the support and ideas he can get to accentuate is person, purpose and plans. This is because interests in political matters and governance have increased considerably from what it is used to be in the country especially in a cosmopolitan city like Lagos.

Quite a number of Nigerians who, hitherto, can best be described as apolitical are now beginning to pontificate and engage in discussion and debates on politics with tremendous passion, thanks to the ubiquity of modern technological tools.

That’s the reason the haves and the have-nots across Nigeria are now in competition in the dissemination of latest information about government and political actors; and, sadly, they are equally on the same table in the spread of misleading reports, otherwise known as fake news, which is the downside of the latitude provided by the new media.

Still, it can very well be argued that voter education and broad engagement in the political process by the populace is quite low in the light of the number of registered voters in Nigeria, the country’s population and the usually long-drawn analyses on different political figures which often, unfortunately, do not match up with the usually ridiculous figures from voters on election day.

Therefore, Sanwo-Olu needs to win more voters in the coming governorship election in Lagos by making his emergence more attractive to voters of all ages who will be inspired to move from mere distant or digital political pundits to real election deciders at the poll.

Brilliant ideas and programmes are certainly some of the strategic means of moving these people from talking to acting and from being nominal electorate to very active populace who will swell the winning numbers.

Thankfully, from every possible angle, Sanwo-Olu and his BOSCO team appear all set for the task ahead.

They know quite well that the imminent political contest will be some steps higher and more demanding that previous contests for the number one seat in Lagos state especially as it has been observed in some grounded quarters that the opposition are gearing up for some cheap political propaganda. But facts and detailed framework are the antidotes to falsehood and ambiguity.

Meanwhile, flowing from his alluring accomplishments and wealth of experience both in the private and public sectors, it is not surprising that Sanwo-Olu is looking at the globally tested and viable bottom-up approach to development in addressing the challenges faced by a mega city like Lagos state.

It is cheery and encouraging to hear that the new man that is coming for Lagos’ topmost job is primarily focused on grassroots development and poverty alleviation in improving governance and addressing some of the development challenges faced by Lagos state.

“There is a large disparity between the rich and the poor. We must reach the grassroots people, who do not have access to the governor. We need to make them feel the impact of government by reducing poverty.

“There is hunger in Lagos and we must address it. Our government will be a listening one; we will adhere to the party’s manifesto and my administration is going to be a participatory one,” he said.

With this pro-poor direction and focus, Sanwo-Olu has brilliantly taken control of a powerful development message that will resonate deeply with the voting public and signal a good beginning for his administration.

His open declaration for the poor in the society and concern for grassroots development is one that will effectively alter the unfounded narratives about the elitist-slant in the governance of the state.

And this will clearly show that the APC leadership in Lagos is given to inclusive development and shared prosperity. There’s equally nothing more exemplary than an eminently urbane man reeling out statistics on the peril of poverty and itching for a battle, through sound policy and programmes, that will help uplift the poor.

Lagos is home to some of the wealthiest people in the world and it is equally the haven for some of the world’s poorest. The pain is the gap between the rich and the poor are far too wide to be imagined.

It is clearly on the basis of this dangerous gulf that Sanwo-Olu and his campaign team have been proactively working on models that will significantly aid the reduction of poverty in Lagos in readiness for the onerous undertakings that lie ahead. He is evidently bothered that the amazing infrastructural development that has become the signpost of the progress so far made in Lagos state would amount to nothing in the presence of frightening poverty.

He understands that poverty, being the parent of crime of many shades, has the capacity to alter the gains of good governance achieved by successive administrations in Lagos, to undermine sustainable development and to hinder daily socio-economic activities of all Lagosians.

Therefore, Sanwo-Olu’s rapt attention to the conditions of the poor and his commitment to improving their lot is a thoughtful and enduring development outlook and a clever campaign slant with immeasurable positive impact.

Without doubt he has equally given a fitting answer to the United Nations and global development experts who are looking up to governors and administrators of densely populated cities across the world, particularly those from developing nations, to take leadership roles in working towards the attainment of the Sustainable Development Goals (SDGs), the new global development agenda.

Instructively, Sanwo-Olu’s position against palpable penury in the city is definitely a viable way of changing the usually damning and one-sided description of Lagos state by some influential global analysts and journals to a state that is rapidly embracing inclusive growth and development.

And since the poor has been searching for a genuine soul to champion their cause amongst the governing elite, having Sanwo-Olu proudly stand to be counted for the underprivileged in our society from the position of government may be signalling the long anticipated paradigm shift in the politics of our world.

Housing, Still On The Priority List By Chinwe Egwim

For Baba Sala, The Icon Who Taught Nigerians How To Laugh

Teacher, Don’t Teach Me No Nonsense, Part III: Outside The Box By Alex Otti