By Kunle Oyatomi November 27, 2017 is the 7th anniversary of Ogbeni Rauf Adesoji Aregbesola’s assumption of office as the governor of the state of Osun. It is more a seminal moment for reflection and through assessment of the achievements of the leader, the government and the party he has led thus far. This is…”
Yusuf
Op-Ed Osun Politics 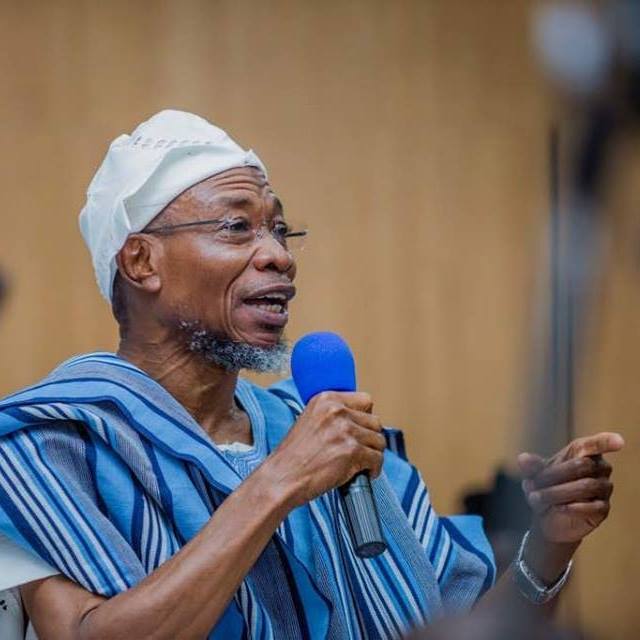 November 27, 2017 is the 7th anniversary of Ogbeni Rauf Adesoji Aregbesola’s assumption of office as the governor of the state of Osun. It is more a seminal moment for reflection and through assessment of the achievements of the leader, the government and the party he has led thus far.

This is not a period to give any attention to the critics. There had been and there still are many of them but their views are inconsequential for the purpose of this exercise. We are concerned here mainly about what happened in Osun between November 27, 2010 and November 27 2017 under the watch of Governor Rauf Aregbesola.

Whatever anyone thinks or would like others to believe, there is a reality on ground which even lunatics should recognize; the state of Osun has changed dramatically. But some strange characters refuse to recognise this dramatic change.

Some people have been ravaged so much by envy, anger and hate that they have seen nothing, absolutely nothing good in EVERYTHING that Ogbeni Rauf Aregbesola has done for the state. Their cynical disposition to what had been occurring in this state under the charismatic leadership of Ogbeni Rauf Aregbesola since 2010 is inexplicable. However, this category of people is mostly the governor’s political rivals and opponents, and a misguided minority.

But Osun is greater than these people. The majority of citizens of this state who have eyes, a conscience and ability to appreciate what they are seeing and experiencing have every reason to be grateful to God for bringing Aregbesola on the scene to pull the state out of the depths of stagnation, which bred poverty and backwardness.

A state that was practically obscure suddenly leapt into the limelight with a revolutionary approach to governance that took his political opponents by storm and flabbergasted political observers who were not prepared for Aregbesola’s “re-branding of Osun state.” But more shocks were on the way.

In the process of implementing his six point integral action plan to * Banish poverty, * Banish hunger, *Create work and wealth, * Restore healthy living, * Promote functional education, * Enhance communalpeace and progress, Aregbesola created a sensation. He began a rebuilding and restoration exercise unprecedented in scale and astonishing in planning and the precision of execution.

This drove the opposition and the biased critics literally mad with envy, rage and hatred. They threw all the mud they could find in Osun at Aregbesola, but he remained focused.

The Result? Tens of thousands of idle and unemployed youths were plucked off the streets. Crime rate plummeted. A health emergency was to address an environment tragedy, which put citizens’ health at grave risk. Investment on human capital development was intensified. Education was re-engineered, while the schools’ infrastructure was modernised.

As you read this, over 800km of roads have been constructed since 2010 including the marvellous network of mega high ways that link Osogbo directly with other city centers in the state. There is nobody who left Osogbo 10 years ago and returns this Christmas that would not be awestruck by the transformation which has taken place under the leadership of Ogbeni Aregbesola-led APC government.

Never in the history of this state has business activities been as bustling as under Aregbesola’s time in office. Today there are more events centers, hotels and entertainment facilities in the state of Osun than there were 10 years ago. These social facilities are as busy as ever and it will surprise you to hear that some of these places charge as much as N500, 000 per event!! Isn’t that an indication that things are better now than before?

Aregbesola’s social welfare programme is worthy of note. Helpless elderly people are supported, widows are empowered to earn a living; even the disabled are not left out. Children in primary schools are given a rich meal everyday that they are in school. The impact of this programme to feed school children resonated across the world.

The British Parliament noticed, the United Nations agency applauded and the Federal Government has adopted the programme nationwide. Yet, what the fake news media propagate is the falsehood which opponents of Aregbesola spread.

Now people accuse the governor of not paying salaries. They argue that instead of paying full salaries he is building schools, constructing roads and building M .K. O Abiola International airport. Some elite in Osun society are saying that the people don’t need all the sophistication that Aregbesola is introducing into the state. These conceited people want Osun to remain as Aregbesola met it and they are inciting one of the population to spread hate across the state against the governor. But the harder they try to demonize Aregbesola, he becomes more popular.

We shall address the foolishness of this one percent of Osun people who are waging a war of calumny against the governor in the coming days and months. However, let these people be assured that their ingratitude and greed will be their undoing in the near future.

The rest of Osun people celebrate with Ogbeni Rauf Aregbesola and the APC because the last seven years are a memorable period of articulate and responsible governance, which has made the people not only proud but also grateful to God for progress made.

We are proud of what Ogbeni has done to the environment; we salute you for the human capital development that the state has had since 2010; we rejoice with parents and children for the wonderful school infrastructure that you have built and the rich meals you are providing for them daily; God will continue to bless you, Ogbeni, for the exquisite roads network you have constructed across the state, especially the ones in Osogbo and other city centres which only fools do not appreciate.

You have proved to the intelligent and responsible world that even in crisis situation, you keep on thinking and working to give the people of Osun a respectable place in Yorubaland particularly and Nigeria in general. Even those in Osun who oppose you cannot but admit that something different has happened in the state, which they themselves cannot do because they don’t have what it takes to govern responsibly.

As we celebrate the 7th year of your tenure as governor of the Stateof Osun, we note that in spite of the financial constraints, you are still hard at work to complete all the projects you have started, especially the road constructions.

We are not unaware that prominent people amongst Osun elite on the opposite side are working to undo what God has used you to do in the state, THEY WILL FAIL.However, we urge you to ensure that the transition process is smooth and will produce a successor that will continue where you stopped. God will give you the wisdom to do what is right.

Oyatomi Esq., is spokesman of All Progressives Congress, State of Osun.

Book Review: “On A Platter of Gold: How Jonathan Won And Lost Nigeria By Bolaji Abdullahi”

On Lagos’ New Lease Of Life For Education By Adesegun Ogundeji