By Yaya Ademola ON his visit to The Head of Service of the Federation in Abuja on Thursday, October 7, 2021, as a part of the activities to mark the 2021 World Day for Decent Work (WDDW), the President of the Nigeria Labour Congress (NLC), Comrade Ayuba Wabba, said there was a need to reviewing…”
Yusuf
featured Op-Ed 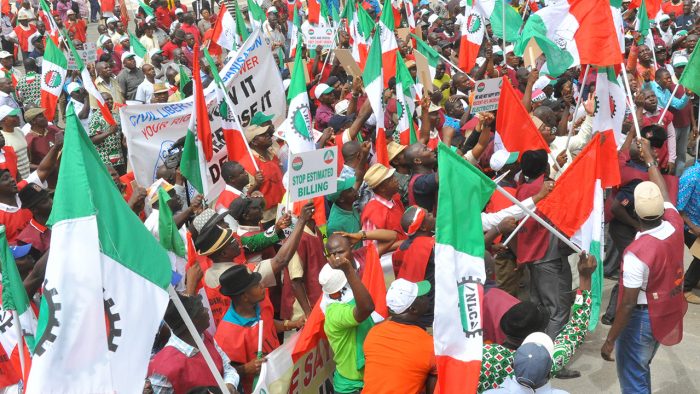 ON his visit to The Head of Service of the Federation in Abuja on Thursday, October 7, 2021, as a part of the activities to mark the 2021 World Day for Decent Work (WDDW), the President of the Nigeria Labour Congress (NLC), Comrade Ayuba Wabba, said there was a need to reviewing the current minimum wage as the prices of goods and services have risen beyond the reach of an average Nigerian worker. Hyperinflation has made nonsense of the current N30,000 minimum wage with very few states implementing it.

However, there is no need for lamentation. What is required is to have a full grasp of how we have been teleported here to fully understand our predicament so as to situate the problem and probably, identify how we could navigate out of it.

A pay rise for the political office holders in 1979 provoked the first demand for a minimum wage. The leadership of Comrade Hassan Sunmonu, the pioneer NLC President, demanded N300 (Three hundred naira) per month minimum wage, backed up with a general strike. Eventually, President Shehu Sagari and Hassan Sunmonu led NLC Executives agreed to N125 (One hundred and twenty-five naira) minimum wage per month in 1981.

In 1989/90, Pascal Bafyau NLC leadership negotiated an improved minimum wage which resulted into N250 (Two hundred and fifty naira) national minimum wage. In that very 1989/90, the N250 could not command reasonable goods and services, hence, a negotiation with General Abdusalami Abubarka military junta which resulted into N3,000 monthly national minimum wage. Although, NLC had been proscribed, a committee of Industrial Unions led by Comrade Sylvester Ejiofor led the negotiation.

Between 2000 and 2001, there was another agitation and negotiation by Comrade Adam Oshiohmole led NLC with President Olusegun Obasanjo led civilian government which yielded N5,500 for states’ workers and N7,500 for federal workers and oil producing states monthly minimum wage. The long journey to August 2010’s N18,000 minimum wage which took effect from January 2011 started in 2008 when the NLC via the Labour and Civil Society Coalition (LASCO) held nationwide rallies and march protests for a new minimum wage of N52,200, among other demands, eventually negotiated to N18,000. The latest minimum wage of N30,000 was signed into law by President Muhammadu Buhari in 2019 which is yet to be fully implemented by many states.

Within the space of forty-years (1981-2021) of the struggle for national minimum wage, what factors have been responsible for inability of workers wage to meet the cost of providing basic needs?

In 1980s, 90s and 2000, there were reasonable levels of production and productivities. Aside some limited mechanised farming, substantial numbers of peasant farmers were on their farms producing cash and arable crops, livestock to feed the local and multinational factories springing up for production in the cities. At that period, textile industry, for instance, was the next largest employer of labour after government. Every man earned money as a means of exchange for goods and services. From year 2000 till now, things have been on a very fast reverse gear. In fact, in the last ten years especially, things have gone from bad to worse.

As a result of government policies and body language encouraging wealth without source of labour, nobody is interested in farming and productivity again but in anything what will fetch quick money. Rapidly, agricultural areas were deserted with concomitant collapse of factories as the production environment is too stuffy for production and profit making. For instance, lack of constant electricity with prohibitive prices of petroleum products to power electric generating sets and maintenance, bad roads which are threats to goods delivery among numerous hostile conditions and policies evaporated the factories and being replaced with mega-prayer centres  for ‘riches and prosperity.’ For little farmers who still believe in working to earning money, attacks unleashed on them by kidnappers, bandits, cattle rustlers, headsmen have forced them out of the farms with this condition getting worst every day. If today, minimum wage is raised to N100,000, it is not sufficient for a worker with a family of five to have access to basic means of life. Therefore, Comrade Ayuba Wabba demand for review of workers salary is in order.

However, as inflation renders the past and present wage useless, so will same happen to any upward review. The price of every basic thing is prohibitive. Electricity tariff has been reviewed upward with pending intention to further increase. The house rent has increased as the landlords will pass the bulk to their tenants. The market men and women, artisans and other service providers will jack up their fees to be able to cope with their rising bills. In essence, huge money will continue to progressively command little goods and services.

Except government is dedicated to contain insecurity and take practical steps on mechanised farming, production and productivity, big money will continue to chase small goods and the value of naira will continue to depreciate.

While continuing to agitate for increase in workers wage to cope with the precarious situation we have found ourselves, labour leadership should wake up from its slumber by doing the needful – form and launch a labour party in name, philosophy, orientation and programmes that will make life better for the poor working people as the present ruling elite with the exception of very few are thieves and rogues and have no ideological compass on how to move us forward. What can give us a better life and food security is production and productivity with export oriented production of goods and services, especially in agriculture with which we have comparative advantage. Only a deliberate programme and policy of the government at all levels could guarantee this and the current ruling elite don’t seem to be interested. All they want is free petrodollar and how they will steal it for their own personal aggrandisements. The earlier the labour leadership takes this initiative, the nearer to decent and better life for the mass majority of the poor working people as against the present poverty and misery in the midst of plenty.