Obasanjo, Do You Know Buhari’s Age? By Tunde Odesola

(Published in The PUNCH on Monday, June 11, 2018)   The phrase, Sho mo age mi ni, is a Yoruba question meaning, “do you know my age?” It was the proficient thespian, Bayo Salami, popularly known as Oga Bello, and his gifted son, Femi, aka Jelili, that brought the viral video clip, Sho mo age…”
Yusuf
Op-Ed Tits Bits 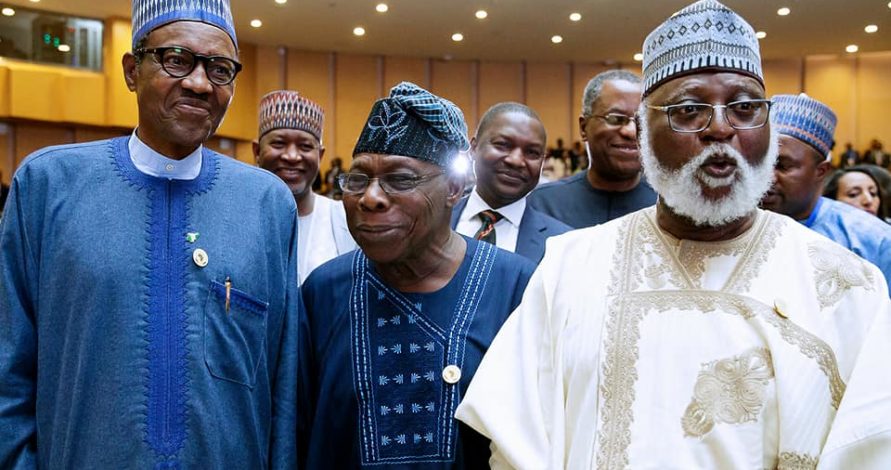 The phrase, Sho mo age mi ni, is a Yoruba question meaning, “do you know my age?” It was the proficient thespian, Bayo Salami, popularly known as Oga Bello, and his gifted son, Femi, aka Jelili, that brought the viral video clip, Sho mo age mi ni?, to me at dinner as I browsed through my phone some days ago. The amusing video depicts a son vehemently contesting age seniority with his father. I showed the video to my wife, and we had a good laugh.

Unbeknownst to me then was the fact that neither Oga Bello nor his son was the originator of the video concept. I was bemused about the foolery, arrogance and vanity of a son challenging the elderliness of his father. Then I contemplated the talent that birthed the video concept. The following day, I came across some other versions of Sho mo age mi ni? video clips on YouTube and I discovered that the concept belonged to a self-confessed former Yahoo Yahoo practitioner, fast-rising actor and comedian, Kazeem Abimbola, aka Jigan Baba Oja.

All over the world, the writer, musician, sculptor, painter, artiste, have no control over the meanings their works evoke from the public. This is why creative artistes, especially musicians, have sometimes had to explain the intentioned meanings of their works – after the public have read different meanings into them. For me, Sho mo age mi ni? is an allegory for the ingratitude, impunity and blind pomposity of Nigeria’s political class, which turns around quickly after election, to bite and abandon the electorate hand that fed it. It is the encapsulation of the big-headedness bestriding the Nigerian Senate, where the comedy of the absurd is daily showing.

President Muhammadu Buhari doesn’t know his age. He personally disclosed this last December when the Minister, Federal Capital Territory, Muhammed Bello, led a delegation to pay him Christmas homage at the Presidential Villa, Abuja. Buhari said, “I am very grateful (to you) for taking time out on a very important day to come and spend it with us. It has been a tumultuous year. I am thinking I am 75. I thought I was 74, but I was told I was 75…” I think Nigerians have the right to denigrate Buhari and think little of what he says because, like no other Nigerian president, he has, one time too many, made some ‘unpresidential’ gaffes.

Recently, in faraway London, he described Nigerian youths as eternally lazy. The other day when his delectable wife, Aisha, publicly sought to make him beware of the sycophants within his government, he reminded her that her roles remained taking care of him and keeping the warmth in the ‘other room’.

Less than a year to the 2019 presidential election, however, President Buhari appears to have discovered his mojo as the smut surrounding his oration is fading into the burnishing bellows of political sagacity. I’m not a Buhari apologist; I’ve consistently been very unsparing in my criticism of the inertia-induced woeful performance of his administration in this column. But his shocking declaration of June 12 as the country’s Democracy Day and the recognition of the winner of the June 12 election, Bashorun MKO Abiola, as the ultimate martyr of Nigerian democracy, is akin to the Hand-of-God goal scored by the Argentine wizard, Diego Armando Maradona, in the 1986 World Cup quarterfinal match against England.

A Maradona-led blitzkrieg had pushed back the English into their own half and the dribbling little magician flicked a short pass to a teammate in the 18-yard box, an English defender attempted to clear the ball midair but miskicked it towards his own goal, and an onrushing Maradona jumped up to score the most controversial goal in the history of the World Cup. English players saw a hand and protested the dubious goal, but the referee saw a head and upheld the goal. As though to prove his ambivalent capacity for evil and good, Maradona, four minutes later, went on to score the goal-of-the-century when he ghosted the English team before slotting home with his famous left foot. Though arms and ammunition couldn’t win for Argentina the Falkland Islands War which ended on June 14, 1982, a punch and a foot sent England out of the World Cup in the June of 1986, and a bitter revenge was earned. June. June. June.

Like Maradona’s Hand-of-God goal, Buhari’s June 12 goal has sent millions of tongues into wagging overdrive – connecting a similarity in the way both captains scored for their respective teams. Both players ended up as devils when they first attempted to showcase their skills to the public – Maradona at the 1982 World Cup in Spain, and Buhari in military uniform, in 1985.

Maradona, however, ascended into glory in 1986 with the Albicelestes, which means “white and sky blue,” winning the World Cup in Mexico just as Buhari returned from political wilderness to claim the presidency in 2015. Four years later, Maradona ended up in defeat at the Italia World Cup final, another probable similarity which Buhari is currently battling to avoid.

As things stand, Buhari, whose team had been uninspiring in the last three years, is gamely prowling to score more Hand-of-God goals, a situation the opposing Aremu FC coached by old solider Olusegun Obasanjo, is finding extremely difficult to deal with. The fledgling Aremu team had been caught off guard by the late June 12 goal. Pundits believe Buhari wouldn’t have had the opportunity to net this memorable goal if Obasanjo had killed off the game and won the trophy when he captained the Wadata FC 11 years back.

Soccer aficionados recalled that when Obasanjo, as a player, faced the yawning net several times, he dribbled back into play, shimmying, shielding, backheeling, heading and thumping his chest until the match ended just as his wish for a rematch never materialized. When the Wadata FC signed Goodluck Jonathan in the summer of 2010, many thought the June 12 Trophy was in the bag as the young Jonathan scored a goal at the University of Lagos stadium in May 2012, but fans trooped unto the field with cudgels, protesting that no goal must be scored against the home team, UNILAG FC, hence the match ended goalless with the strike ruled as offside.

When the canny manager of Allied Forces FC, Bola Tinubu, bought the old, half-fit, gangly and injured Buhari from Army FC in 2014 as a free agent, fans thought it was only to give the Daura-born striker the pathway to a fabulous retirement and a three-season poor run of form had made many give up hope on a possible career rejuvenation for the taciturn striker. However, the timing and execution of the career-enhancing goal by Buhari so much jolted opposition teams that efforts have been in top gear to prise off the backline of Wadata to fortify the porous Aremu defence and their leaky goalkeeper. Meanwhile, reports coming in indicate that want-away midfielder, Dinosaur, taken out during a recent match for brain concussion, is responding to treatment.

Veteran match commentator, Ernest Folorunsho, in his post-match analysis, said, “What a match! Soccer and politics are interesting games. The takeaway from the June 12 victory is that it teaches Nigerians, especially our youths, the virtues of self-belief, perseverance, hopefulness, dedication, heroism and patriotism. MKO never backpedalled in the face of death.

“Buhari is the most lethargic and unpredictable player ever to don the green-white-green jersey; when you expect him to shoot, he holds on to the ball, when you expect him to run, he shuffles. But never overlook him; in a combination of leg-over and body swerve, he beats both Obasanjo and fascist defender, Ibrahim Babangida, to lift the June 12 Trophy. In an amazing sermon delivered on September 11, 2016, Pastor Tunde Bakare warned on the divine need to honor and recognize MKO. Today, the sermon is fulfilled. Congratulations, Nigerians!”

Buhari At 76: Why We Love This President By Femi Adesina