Fellow Nigerians, let me state categorically that the great fun is about to begin in our dear beloved country. Walahi. Chief Bisi “Baba” Akande controversially stirred the hornets nest today when he proclaimed the death knell of zoning so far as the South West is concerned.   In case you don’t know, Baba Akande…”
Editor
featured Op-Ed 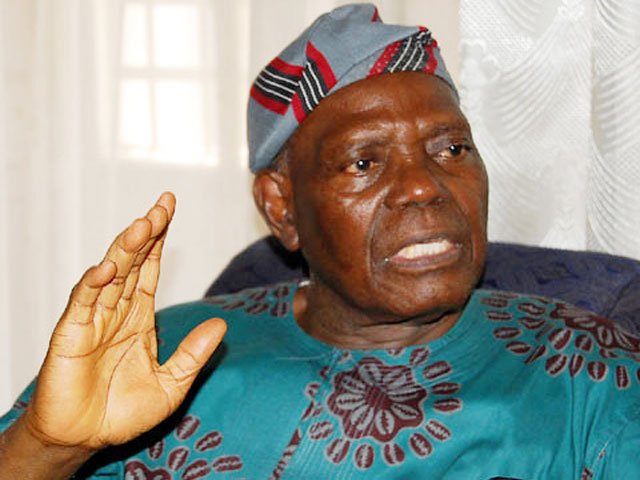 Fellow Nigerians, let me state categorically that the great fun is about to begin in our dear beloved country. Walahi. Chief Bisi “Baba” Akande controversially stirred the hornets nest today when he proclaimed the death knell of zoning so far as the South West is concerned.

In case you don’t know, Baba Akande is a former Deputy Governor of old Oyo State, former Governor of Osun State, former Interim Chairman of Alliance for Democracy, former Chairman of AC, former Interim Chairman of APC and much more, is one of the most respected and revered leaders in Nigeria today. He has worked hard to earn that uncommon reputation. If you want someone who can bring about a consensus where it seems strife is inevitable, then Baba Akande is your man. He is very honest and remarkably frank. He is also a man of fairness, justice and peace. Most people I know see him as an icon and treat him as one. He is seen as one of the few Yoruba leaders who has remained steadfast and loyal to the lofty ideals and heights of the late sage, Chief Obafemi Awolowo. I have done this little introduction for the sake of our young ones who may not know how important and influential Baba Akande is.

When such a political colossus speaks, therefore, you must listen attentively to one of our most outstanding symbols. Yes, Baba Akande spoke two days ago and tremor reverberated across the nation. In fact, he said what many of us already knew was coming. I had written several times about it, more appropriately, against it. I’ve never hidden my disdain against the idea of zoning political appointments. Zoning and Federal character have both failed to cure the maladies that gave birth to them. They have mostly empowered and enriched some cliques and acolytes. Those policies could not have succeeded in any event because they fail to take account of the truism that merit cannot be sacrificed on the altar of expediency as the only result is doom.

My interpretation of Baba Akande’s salvo is that the alliance at the centre is about to collapse. The ruling party, APC, is about to splinter into many parts, unless a miracle happens very fast. A rebellion of monumental proportions is brewing even if it has not yet exploded into smithereens. I have no doubt in my mind that the cookie is about to crumble and the bubble is about to burst. Please, watch this space, and note more what Baba Akande has not said than what he said.

What Baba Akande has not said is simply that the days when the Presidency would be voluntarily zoned to exclude most sections of the country in favour of another section, whether the candidate presented and supported by the people is competent or useless, are over. The truth is zoning never worked anyway, as some Presidential candidates left their original parties for other parties in defiance of the zoning formula of their own party.

Without mincing words, it is obvious that the Yoruba leadership has decided it would no longer support other tribes, zones or regions to attain to power to the exclusion of their tribe. They would rather work hard, reach out, and join hands with like minds to get power.

Their decision is borne out of the acute frustration and disappointment that makes them feel cheated about the Nigerian configuration which does not throw up the best but regularly favours the dregs of society who have only contributed to drawing Nigeria backward, in most cases.

The campaign has probably started in earnest, culminating in the search for a Yoruba Presidency. Though the Governor of Ekiti State, Dr Peter Ayodele Fayose has controversially but ceremoniously thrown his hat into the ring, it is the fact that the capo di tutti capi, Asiwaju Bola Ahmed Tinubu, may be warming up for his turn to take a major shot at the race of his life that is most significant.
Mark my words. One of the greatest political strategists in Nigeria, Tinubu is tired of being a kingmaker and he would rather be the king. Indeed, that has always been his ambition but this has been largely curtailed by circumstances. Like many of those who supported Major General Muhammadu Buhari to attain power, after so many attempts, the former Senator and former Governor of Lagos State, feels he’s not gotten the respect and relevance he deserves for his monumental effort. Accordingly, he seems determined to make a personal push.

Apart from the virtues of Baba Akande that I have enumerated above, a lesser known one is his deep sense of loyalty. In thus regard he is known to he fiercely loyal to Asiwaju, who saw his sterling qualities and has promoted them on the national stage. When he spoke therefore, he was also wittingly or unwittingly acting as his friend’s voice and heralding Asiwaju’s aspiration to be top dog! The options that are likely to be pursued by Tinubu can be shortly and succinctly summarised.

BAT, as we love to call him, will contest as Presidential candidate. Clearly, such an audacious attempt would be in a party other than APC which going by recent events and noises, is likely to insist on fielding a miraculously rejuvenated President Buhari. This is obviously Asiwaju’s preferred move, but again the present dynamics and the dark clouds which hovers ominously over him may mean that he is better suited to hide behind another person as President.

Remember, age and health are going to be strong factors in the coming election and at 65 now, Tinubu is seen as having crossed the threshold.

The second option is to realise his limitations and pressurise APC into submission to the extent that he would have to be appeased and rewarded.

BAT’s former protégé and current Vice President, Professor Yemi Osinbajo may be cajoled into stepping down for his political mentor. It is not known if President Buhari would agree to this fiasco, which would mean, not only a Muslim Muslim ticket but also one without the benefit and refreshing vigour of vibrant youth, out of desperation for a second term.

No matter what you think, these are not the easiest of times for APC. It is very clear that there are no easy options ahead with the number of hardened and resolute aspirants on parade, including the flighty former Vice President, Abubakar Atiku who seems on the way out of APC. Some are also suggesting an Atiku/Tinubu ticket but there won’t be much difference between that pair and that of Buhari/Tinubu on account of age and religion. This is why many feel Tinubu just wants to rattle Buhari to bring him to the negotiating table but I thing he’s very determined about being the president himself after helping a few African Presidents to power.

Sadly, it is not just about elections and ambitions, even the presidential team is rapidly falling apart. Everyone is fighting everybody and it is so disheartening and distressing! What we envisaged to be a change is fast becoming a mirage and turning out to be a riotous calamity!

A Lion In The North Sea: The Battle For Chevron Netherlands

Kashamu, Obasanjo, The Ills Of The Dead And The Living