The Nigeria National Petroleum Corporation, NNPC, has begun off-loading petroleum products at its depot located in the Hotoro area of the ancient city after decades of abandonment due to acts of pipeline vandalism. The products are being pumped from Kaduna to Kano through the repaired pipelines. With the repairs, the company had been able to…”
Editor
Tits Bits 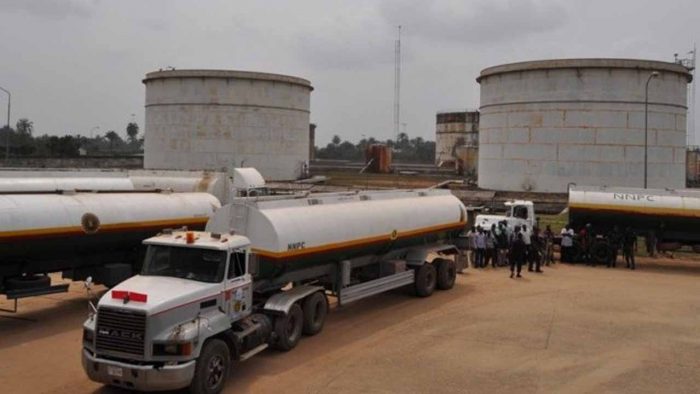 The Nigeria National Petroleum Corporation, NNPC, has begun off-loading petroleum products at its depot located in the Hotoro area of the ancient city after decades of abandonment due to acts of pipeline vandalism.

The products are being pumped from Kaduna to Kano through the repaired pipelines.

With the repairs, the company had been able to transfer over 20 million litres of AGO into tanks of Kano and Kaduna refinery in addition to 40 million liters of diesel to Kano depot

Streams of tankers were seen at the point of the re-commissioning taking turns to load products to hinterlands and neighboring states.

The Group Managing Director of NNPC, Maikati Barau at the re-commissioning ceremony held at the NNPC depot in Kano state north western Nigeria said “the pipeline repairs cost the agency over N1.637 billion Naira and was carried out between January and December 2016.

The Ajaokuta – Kano gas pipeline is also being worked on for sustained pumping of gas to kano to revamp its ailing industries due to power outages,” the NNPC GMD stated.

He said to prevent further acts of vandalism; the corporation was compelled to put in place robust security at the cost of N2billion naira and maintenance contracts thereby increasing the operational cost of the corporation to a prohibitive level.

He therefore called the Kano state Governor and the good people of the state to assist in securing the national asset.

He said the repairs were part of the President Muhammodu Buhari’s effort to revamp these abandoned assets and put them back to work for the overall security and improvement of petroleum products supply and distribution for the benefit of Nigerians.

He also added that the other pipelines and depots are being commissioned and re-commissioned across the country under the 12 Business Focus Area, BUFA, programme to reposition the corporation towards an upward trajectory of sustained profitability.

Nigeria has over 8,000Km pipeline networks used for the transportation of crude oil, petroleum products and natural gas out of which NNPC has over 5,120 Km of them and 21 depots that are frequently vandalized leading to shut down and economic sabotage

The Deputy Governor of Kano state Professor Abubakar Hafiz who represented the state governor called on Kano people to see the pipelines and the depot as their own and protect them.

“These pipelines pass through our communities and we must recognize them as ours and do everything to protect them,” solicited the deputy governor

He said the re-commissioned depot will bring life back to the state as an industrial hub.

He commended the NNPC for rejuvenating the downstream sector which has direct impact on the people and the economy of the nation as a whole.

A stakeholder, Aminu Ibrahim said by the re-commissioning, “more people are bound to get employment as activities will pick up.”

Kano state is the second biggest commercial centre in Nigeria with the highest population according to a 2006 national census figure.

Danny Welbeck Is Not Leaving…Arsene Wenger