A former senator of the Katsina/Dutsina Senatorial district (1979-1983), Senator Abba Ali, has stated that only President Buhari has what it takes to tackle corruption in the country. In a recent media interview with The Punch, Ali said “President Buhari should go for a second term in office. He has started a good job which…”
Editor
featured News Politics 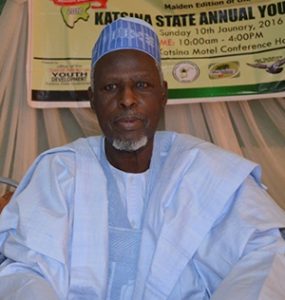 A former senator of the Katsina/Dutsina Senatorial district (1979-1983), Senator Abba Ali, has stated that only President Buhari has what it takes to tackle corruption in the country. In a recent media interview with The Punch, Ali said “President Buhari should go for a second term in office. He has started a good job which is acknowledged both within the country and globally and it is better he contests again for a second term in office so that he can finish the good job he has started. Everybody knows that this man is not out to accumulate wealth but to put Nigeria in its appropriate place in the comity of nations.

“This man is out to see that Nigeria is great again. And he has been doing all within his powers to achieve this. He realises that no country can be great with corruption. So he is fighting it with zeal and he is also tackling insurgency and all forms of criminality. He knows that Nigeria needs good infrastructural development and he is pursuing this. Look at the Mambilla power project that has been abandoned. He has resuscitated it. There are other projects being embarked upon by his government to ensure that the Nigerian youths are no longer jobless. So, I strongly support the call for his second term in office. By the time his second term ends, he would have laid a very solid foundation for whoever that is coming after him to leverage on.

“God, in his own wisdom, made President Muhammadu Buhari to be above board compared to his fellow politicians. We are prepared to support him to ensure that his second term bid succeeds and I believe that President Buhari will succeed while his detractors will fail.

“Based on my experience in politics and with my age, I am saying it with all seriousness that I have not seen anybody among the current crop of politicians in the country who has a good intention like President Buhari. Many of them have amassed enormous wealth meant to take care of their people. Many are still stealing blindly. President Buhari stands out among the current political class in Nigeria. I will rather encourage him to go for a second term so that there will be sanity in the political sphere”, he said.

On controversies surrounding the president’s health, the former senator said “President Buhari is hale and hearty; let me first clear that impression on his health. Those urging him to resign on health ground have forgotten that God is the creator of mankind and he has the final say on when one will die. I have seen an old man in Katsina here who was in coma for four months, yet the old man thereafter lived for another eight years before he eventually died. I have also seen a situation where a man was seen today in good health and died the following day not as a result of accident but normal natural death. That is God for you. So, those saying President Buhari should resign on health grounds are going beyond their limits. They are not God and they are playing God by saying so. Only God knows beyond anybody.

Asked whether the nation could not thrive on its sytems instead of on an individual like the president, Abba Ali said “Nigeria’s greatest problems as of today are the National Assembly and the judiciary. The whole problem revolves round corruption which President Buhari is tackling with all his energy. The National Assembly members are supposed to make laws and ensure checks and balances on government spending but the federal lawmakers have become contractors handling constituency project which was not supposed to be their responsibilities. Their job is to make good laws and carry out oversight functions to ensure prudent management of the nation’s resources. When we were at the senate and government allocated the 1004 estate (in Lagos) for us as our accommodation, we asked government to direct the Ministry of Works and Housing to carry out necessary renovation and fittings there.

“We did not say that we will carry out the exercise by ourselves. Ordinarily, when you are a lawmaker, your primary job is to make laws and not to chase contracts. When I was the Chairman of the National Research Institute of Chemical Technology, Zaria, the institute’s budget was passed but the National Assembly then, ensured that money was not allocated to the institute until the end of the year simply because we did not offer bribe to anybody. I was also, the Chairman of the Senate Committee on Works and Housing during the second republic, our committee did not demand money from anybody to have bills passed. Instead, we did our job with all sense of patriotism and concern for the poor people. And as everybody can see too, President Buhari has started to sanitise the judiciary. The bane of the country is corruption and it is only someone with the character of President Buhari who can tackle the problem headlong.