The Nigeria Immigration Service (NIS) has pledged to support the Nigerian Immigration Lawyers Association (NILA), to deepen the understanding of immigration laws and practices in the country. Acting Comptroller General of NIS Isah Jere stated this in Abuja at the 2022 Immigration Law and Policy conference. It was gathered that the conference is with…”
Olamide
News 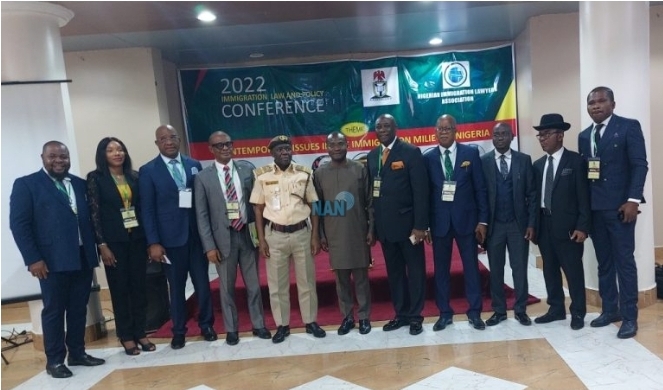 The Nigeria Immigration Service (NIS) has pledged to support the Nigerian Immigration Lawyers Association (NILA), to deepen the understanding of immigration laws and practices in the country.

Acting Comptroller General of NIS Isah Jere stated this in Abuja at the 2022 Immigration Law and Policy conference.

It was gathered that the conference is with the theme, “Contemporary Issues in the Immigration Milieu in Nigeria.”

Jere was represented by Mr Muhammad Muhammad, a Director in charge of Border Management, who said that the platform would help deepen the understanding of Immigration Law and Practices in Nigeria.

He added that it would further promote viable and sustainable synergy among relevant stakeholders to ensure safety of its citizens in the country.

“It is hoped that this conference will afford experts and other stakeholders the opportunity to compare notes and deliberate extensively on relevant contemporary issues relating to Immigration Law and Practices.

“On our part, we pledge our commitment to an enduring partnership with NILA, to ensure that the collective efforts towards effective and efficient management of migration are tandem with global best practices, ” he said.

Earlier, the President, NILA, Prof Epiphany Azinge, said the conference sought to highlight and interrogate some of the significant changes in the immigration space in Nigeria since 2015 onwards.

“Contemporary issues in Nigeria at this point in time can not be discussed without enormous emphasis being placed on the issue of immigration, migrants and security in the country.

“It’s a critical point in time for us to ask relevant questions and to raise those questions and demand deserved answer as the case may be.

“So we are using this platform to ask such questions, create awareness, sensitise the populance, citizens but more importantly, to get the lawyers to reality that there are so much to achieve as far as immigration processes and policies are concerned.

“So, we are kick starting with this and trying to develop the skills of lawyers in this regard.

“For example, American Immigration Lawyers Association (AILA) was created and founded in 1946, that’s over 75 years ago. We are just starting ours today but we will grow.

“America is 200 years plus while Nigeria is 60 years. So obviously, there is gap but we want to bridge that gap and there must be a day to start and we have started today,” he said.

Azinge expressed the hope to see a positive progress in a shortest possible time how lawyers in the country would play significant roles as far as immigration processes were concerned.

He added that the conference brought together lawyers, judges, academics, policy makers and other stakeholders at the frontline of immigration practices to share their knowledge and expertise.

He future explained that the conference would be merged with the induction of eligible persons into the various cadres of membership.

In Osun, Man Remanded For Defrauding Admission Seeker Of N512,000