The Customs Area Controller Tincan Island Port, Comptroller Musa Baba Abdullahi during a chat with stakeholders revealed that the Tincan Island Command of the Nigeria Customs Service generated a total of N162,701,701,136.83 against the sum of N130,006,136,996.36 generated in the corresponding period of 2017. This represents a difference of (N32,695,564,140.47). The Customs Area Controller stated…”
Editor
Economy News 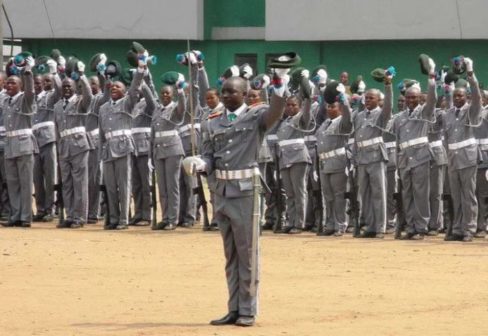 The Customs Area Controller Tincan Island Port, Comptroller Musa Baba Abdullahi during a chat with stakeholders revealed that the Tincan Island Command of the Nigeria Customs Service generated a total of N162,701,701,136.83 against the sum of N130,006,136,996.36 generated in the corresponding period of 2017.

The Customs Area Controller stated emphatically that the Command has been repositioned as the most business-friendly Port wherein all compliant declarants will be duly compensated and given special preference.

In the words of the Customs Area Controller: “We are deploying multi-layered approach in addressing the issues of compliance which is a panacea to Trade Facilitation, through reward for compliance and ensuring that compliant declarants are given expeditious attention in line with the presidential directive on Ease of Doing Business.”

Similarly, the Customs Area Controller noted that the Command is at the verge of fully automating key seats in the Command to enable seamless Operations as he made reference to the just concluded training of officers on E-Transire and NSA-End User Certificate Procedure.

On seizures and Detentions, the Customs Area Controller stated that the Command effected seizure of assorted offending items ranging from used Clothing, Children Toys, Assorted Furniture, Bags of Rice, Shoes, Handbags, Used Vehicles etc with a Duty Paid Value (DPV) of N138,752,991.00 as against that of 2017 which stood at a DPV of N88,062,250.

He stated that the Command is in steady progression in all aspects of its primary functions and urged stakeholders to take advantage of the various complaints platforms in channeling their genuine complaints for necessary action.

The CAC recalled that during the period under review, the Command also effected seizures of large quantity of ammunition and other military hardware during scheduled examinations and promised that the Command will not lower its guards in ensuring that such illicit consignments does not pass through the command.

The CAC appreciated the support of the CGC Col. Hameed Ibrahim Ali, his Management Team, the Officers and Men of the Command and indeed the Esteemed Compliant Stakeholders in TCIP for their support during the period under reference. He pointed out that the Command will continue to leverage on the already harnessed competences of it’s hard working personnel to carve a niche and remain outstanding in the performance of its statutory mandate.

“We are encouraged by the steady progress in compliance by the importers and we are optimistic that the trend will continue to show appreciable response,” he added.

On the recurring issues of multiple alerts due to non compliance with the fiscal policies, the CAC charged importers/agents on honest declarations and assured that with the take off of the “One Stop Shop” area under construction, the issue of multiple alerts would become history.

The Controller posited that the Command remain committed to the change mantra of the CGC and will not renege on it’s statutory responsibilities.

Fashola Tells Gencos, Discos To Perform Or Face The Consequences