By Murtala Agboola Muslims have been challenged to venture into media ownership with a view to tackling the alleged bias and discrimination of the media against Islam and Muslims. This was the charge at the launching of the Board of Trustees (BOT) of the Muslim Media Watch Group (MMWG) held at the Banquet Hall, Government…”
Yusuf
News 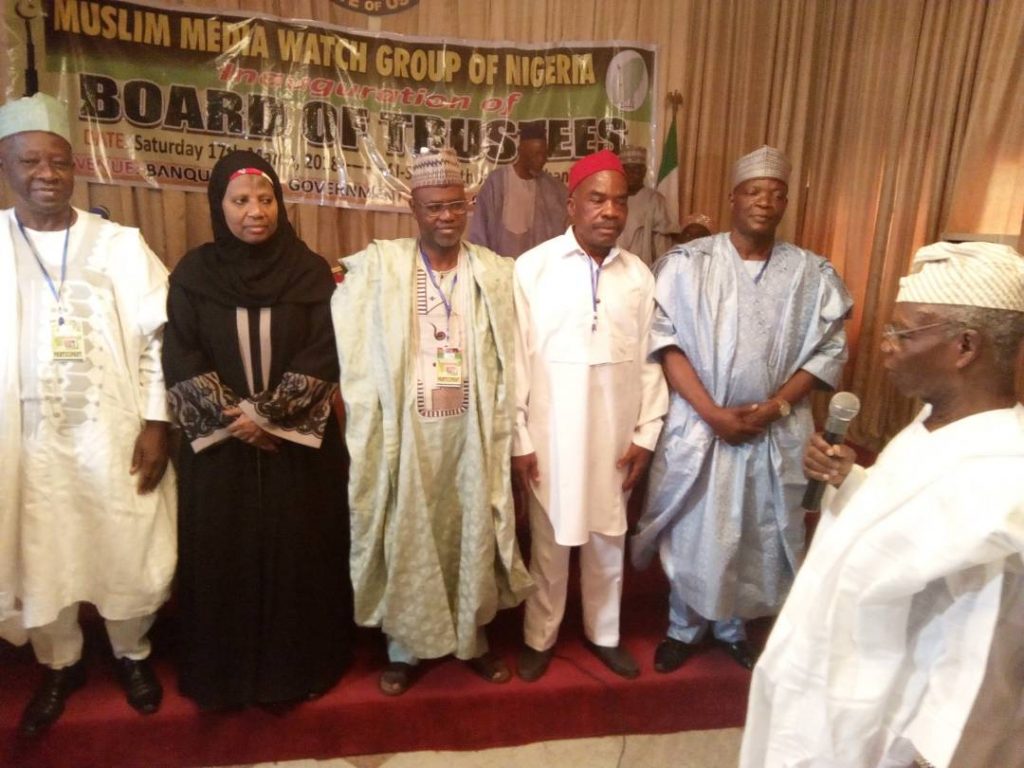 Muslims have been challenged to venture into media ownership with a view to tackling the alleged bias and discrimination of the media against Islam and Muslims.

This was the charge at the launching of the Board of Trustees (BOT) of the Muslim Media Watch Group (MMWG) held at the Banquet Hall, Government House, Osogbo last weekend.

The Sultan of Sokoto and the President-General of the Nigerian Supreme Council of Islamic Affairs (NSCIA), Alhaji Muhammed Sa’ad Abubakar who spoke through his deputy, Alhaji Sakariyau Babalola at the event urged the Nigeria media to shun fake news and report only factual and balanced stories, saying, the media has been unfair to Islam.

He then urged Muslims not to be discouraged by the alleged bias and discrimination of the media.

Also speaking, the Governor of the State of Osun, Ogbeni Rauf Aregbesola who was represented by the Grand Mufty of Osogbo land, Sheik  Moruf Ishola, warned against hate messages and subtle incitements along ethnic and religious lines by the media.

This, according to him, portends danger of triggering a catastrophic civil war from which the nation may never recover, saying, journalist should be able to separate free speech from libel and promotion of falsehood.

Nigeria as falsehood that was not backed by any fact. Aregbesola, the Special Guest of Honour at the occasion stated that “If you say that Aregbesola wants to Islamize Osun and secede from Nigeria, you must be able to back it up with facts and incontrovertible evidence”

“Failure to do so, it has become libel and falsehood which is injurious to my person, government of Osun, our political party, the All Progress Congress (APC) and ultimately the society in general”.

Speaking on “Effective Use of Mass Media for Da’awah”, the Guest Speaker, a former Managing Director of the defunct National Concord Newspaper, Alhaji Liadi Tella identified alleged ‘media biased’ against Islam as hindrance to the effective use of media for propagating Islam.

He stressed that Nigerian government and the media were aware for a long time that Boko Haram are not muslim, but deliberately addressing them as Islamic sect.

According to him, efforts to deceive members of the public from knowing that muslims dominate public schools in Osun led to the war against Hijab wearing by pupils in the state.

He continued, “The government knew when French jet was dropping arms for Boko Haram in Sambisa Forest. They continued attributing them to Islam”.

“Fair, balanced and objective reportage are the cardinal ethics and supposed inviolable principles of journalism, unfortunately, this is not so with media reportage on Islam and muslims in Nigeria”.

In view of this, Tella challenged muslims who are well to do to embrace newspaper ownership, saying, it is only when muslim own newspaper, radio station and television houses that they can fight the unfair and unbalanced reportage against muslims and Islam.

In his welcome address, the National Coordinator of MMWG, Alhaji Ibrahim Abdulahi said the aim of the group was to promote quality broadcast in media organisation all over the country.

He said the group is also working to correct misrepresentation of Islam and muslim in any media by putting the correct, accurate and true picture of issues at stake in the right perspective for the benefit of viewers, listeners and readers.

The 7-member Board is headed by a renowned Senior Advocate of Nigeria (SAN), Mallam Yusuf Ali.