A final year student of Accounting at the Osun State University, Yemi Olaniyan, whose family said he disappeared from the Ojodu Police Station in Lagos State, has come out of hiding. The student was presented to journalists by the Commissioner of Police in Osun State, Mr. Fimihan Adeoye, at the police headquarters in Osogbo on…”
Yusuf
Osun 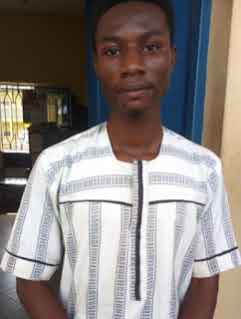 A final year student of Accounting at the Osun State University, Yemi Olaniyan, whose family said he disappeared from the Ojodu Police Station in Lagos State, has come out of hiding.

The student was presented to journalists by the Commissioner of Police in Osun State, Mr. Fimihan Adeoye, at the police headquarters in Osogbo on Wednesday.

Olaniyan resurfaced two weeks after he was declared missing by his family.

He claimed to have left Osogbo for Lagos on February 28, ostensibly to submit an application for Industrial Training with the Institute of Chartered Accountants of Nigeria in Yaba, Lagos.

Olaniyan said he informed a female acquaintance simply called Oyin that he would spend the night at Ojodu Police Station in Lagos later that day, but he confessed to have later changed his mind, claiming he spent the night at a shopping complex, from where he allegedly left for Ilorin the following morning.

He said he started doing “email job” in Ilorin, Kwara State, to raise his school fees which he said he lost to the MMM Ponzi scheme.

Olaniyan said, “I went to Lagos and it was getting late. I could not return to Osogbo that day. I decided to go to Ojodu Police Station to pass the night.

“One of my friends, a lady called me and I told her that since I could not make it back to Osogbo that day, I decided to pass the night at Ojodu Police Station.

“After speaking to her, I changed my mind. I just looked for a space at a shopping complex and I passed the night there.

“First thing the following morning, I got a free ride going to Ilorin. When I got to Ilorin, I started doing menial job to raise money.

“I didn’t deliberately mislead the public. My friend that released the information online later called and said I should return home.

“She said SSS people were on her trail. She said she would commit suicide if I didn’t return. Because of that threat, I left Ilorin and went to one of our neighbours, who is a retired officer of SSS.

“The man, after listening to my story, led me to the SSS office. I am indeed very sorry for whatever embarrassment that misinformation might have caused the Police.”

The CP said the boy turned himself in to the Department of State Services and the operatives of the DSS brought him to the Police.

Adeoye stated that the information that Olaniyan spent the night at the Police station and that his whereabouts became unknown because the Police had harmed him was incorrect.

The CP said, “Findings showed that the boy paid fees last when he was in 200 level and he is now in 400 level.

“The information in the public was tilting towards Police harming the boy when he never slept at the station.”

It will be recalled that the Vice Chancellor of the Osun State University, Prof. Labode Popoola, had in 2016, disclosed that students of the university owed the school over N1bn.

He said most of them invested in MMM and lost their fees to the Ponzi scheme.

The Police also announced the rescue of two stolen children from a syndicate.

Parading the suspects, Mr Adeoye, said the rescue of the two children was made possible through the reportage of the arrest of members of the syndicate.

“Two weeks ago , the media widely reported the arrest of two persons, a reverend father and a woman, who kidnapped and later sold an 18-month-old baby boy they stole in Osogbo.

“This report prompted a couple from Ganmon in Kwaran whose three and five- year-old daughters were stolen in Ilorin to check with the command to see if those arrested were the same people who stole their daughters.

“When the couple saw the suspects in our custody, it was discovered that it was the same gang that stole their daughters and further investigation launched by the command led to the recovery of their children.

“In another development, however, four men were also arrested in Ibadan by men of the Osun Police Command for forging various certificates, especially academic certificates.

“The men were arrested after a graduate of Osun State Polytechnic, Iree, asked someone to help her collect her certificate from her school.

“Instead of the person sent to collect the certificate from the school, he went to patronise the forgers who issued a forged certificate to her. “When the certificate owner, however, took the certificate to her school to be verified, the school denied issuing it and this led to her reporting the matter to the police and the subsequent arrest of the forgers, ” he said.

How I Lured, Stole Goats, Mother Of Three Confess In Osun