Thus breathing new life into a Liga title race that had appeared dead by claiming a dramatic, last-gasp 3-2 victory in one of the greatest games this incredible rivalry has ever seen. Indeed, many Madrid fans had come to the ground expecting to bury Barcelona. Avoiding defeat would all but seal the title and deal…”
Yusuf
Sports 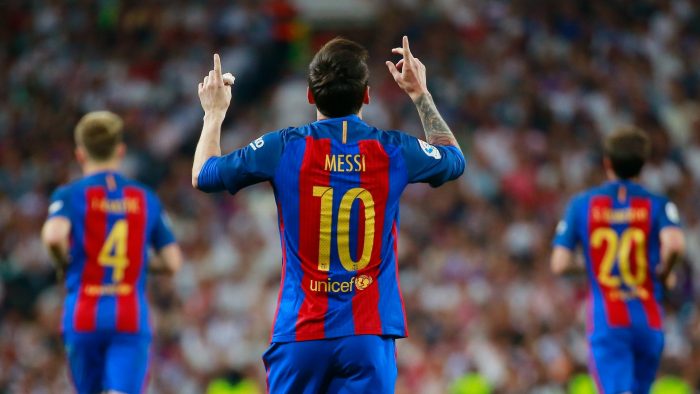 Thus breathing new life into a Liga title race that had appeared dead by claiming a dramatic, last-gasp 3-2 victory in one of the greatest games this incredible rivalry has ever seen.

Indeed, many Madrid fans had come to the ground expecting to bury Barcelona. Avoiding defeat would all but seal the title and deal a fatal blow to a Blaugrana side seemingly on the way out after their comprehensive Champions League elimination at the hands of Juventus. Remarkably, even Messi was being written off.

The Argentine had come into the game without a goal in his previous six matches against Real Madrid. This unprecedented drought was viewed by some as evidence that Messi was no longer the phenomenon of old – in spite of the fact that no player has scored more goals in all competitions across Europe’s top five leagues.

When it comes to appraising the talents of Messi and Ronaldo in the modern era, it seems that they are only as good as their last game, and whereas Ronaldo had fired Real into the last four of the Champions League with a hat-trick against Bayern, Messi had drawn a blank in Barca’s midweek draw with Juventus.

Luis Enrique was even asked in his pre-game press conference if it was time for his No.10 to shine again. “I think it’s time for FC Barcelona to show their full potential,” the Barca boss replied. “We shouldn’t focus on just Messi or anyone else.”

Real did focus on Messi, though, seemingly intent on nullifying his influence by any means necessary. Casemiro was booked just 13 minutes in for cynically scything the 29-year-old down after being embarrassed by Messi’s quick feet in the middle of the park.

Marcelo, meanwhile, left the Clasico’s all-time record goalscorer prone on the Bernabeu turf with blood pouring out of his mouth with a careless elbow to the face.

Messi would have his revenge, though, retaliating not with aggression but artistry, bravely refusing to stop running at his rivals. He made five dribbles in the first half alone; the rest of the players on the pitch managed two between them.

He was felled twice more by Casemiro before the break, twice more he picked himself up off the ground and continued to carry the fight to Real.

Thirty-three minutes in, he finally lost his Brazilian tormentor for the first time and capitalised in scintillating fashion. He took a pass from Rakitic in his stride to glide past Luka Modric before then leaving Dani Carvajal swinging at thin air as he slotted the ball coolly past Keylor Navas to level the game.

Messi has involved again as Barca took the lead with 17 minutes to go. The Argentina captain found his path to goal blocked – legally, for once – but Rakitic picked up the pieces and unleashed a thunderous strike that left the brilliant Navas with no chance.

When Sergio Ramos was rightly shown a straight red card for throwing himself into a disgusting two-footed lunge at Messi just four minutes later, the game appeared to be up for Real. However, the 10 men incredibly drew level when substitute James Rodriguez turned in Marcelo’s cross.

Messi wasn’t done, though. With just 13 seconds of injury time to go, he timed his arrival into the area to perfection before driving home Jordi Alba’s pull-back to silence the Santiago Bernabeu. Bloody, battered and still sporting a black eye from a bruising encounter with Juve, he celebrated by showing them his jersey as a reminder that he remains the King of the Clasico.

They thought his reign was over. They were wrong. Barca may be in decline but Messi most certainly is not. As former Madrid boss, Fabio Capello exclaimed in a Bernabeu commentary box after Messi waltzed through to score the equaliser: “He’s still the genius of football.

Is Ahmed Musa Still Indispensable To The Super Eagles?