Nigeria has requested the Italian government to identify and prosecute those involved in the death of young 26 Nigerian girls on the Mediterranean sea. The request was made by the Director-General of the National Agency for the Prohibition of Trafficking in Persons (NAPTIP), Dame Julie Okah-Donli, in a presentation at the International Conference on “Women…”
Editor
News 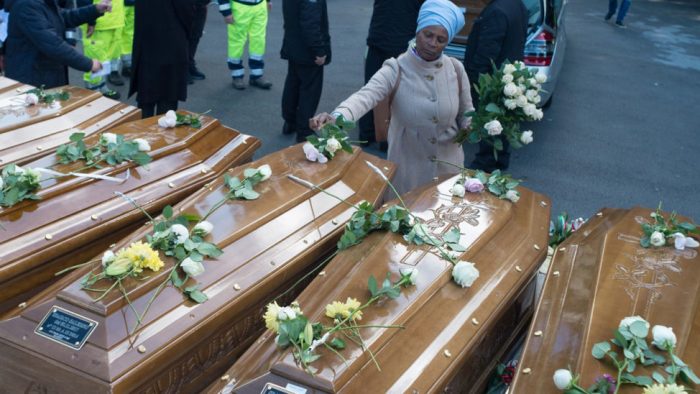 Nigeria has requested the Italian government to identify and prosecute those involved in the death of young 26 Nigerian girls on the Mediterranean sea.

The request was made by the Director-General of the National Agency for the Prohibition of Trafficking in Persons (NAPTIP), Dame Julie Okah-Donli, in a presentation at the International Conference on “Women Empowerment and the Fight against Trafficking in Persons – The Partnership between Italy and Nigeria,” organised by the President of the Italian Chamber of Deputies, Laura Boldrini.

A statement by Head, Press and Public Relations of NAPTIP, Josiah Emerole, quoted Okah-Donli as frowning at the haste with which the girls were buried without full disclosure of their proper identities and nationalities

The NAPTIP boss spoke in Italy at various fora with officials of the Nigerian Embassy in Italy, officials of some sister Agencies and the Nigerian community in her attempt to unravel the mystery behind the recent deaths of Nigerian migrants at the Mediterranean Sea.

The Speaker of the House of Representatives, Yakubu Dogara led the Nigerian delegation to the conference.In her presentation, Okah-Donli conveyed the anger and sadness of the Nigerian people over the news of the death of the young girls especially without proper profiling of their identities and circumstances of their death.

”We demand that those who are involved in the gruesome death of these girls be properly identified and prosecuted,” she said. she challenged the Italians and other destination countries to equally show good faith by prosecuting their own nationals engaged in the obnoxious trade, adding, “if there is no buyer the trade will die off’.”

She also asked the Italians to always engage in full disclosure when their nationals are involved. She requested them to implement to the letter the Palermo Protocol especially with victims care and support rather than treat the victims especially those from Nigeria as criminals.

The Director-General explained that while a good number of Nigerian victims voluntarily opt to migrate for the purpose of seeking better living conditions, others were lured into being trafficked without knowing the consequences of their decisions. She however, added that the desperation has led to the colossal loss of lives of would-be migrants in the Sahara Desert and the Mediterranean Sea.

To stem the tide of such dangerous journeys, she explained that the Government of Nigeria has introduced a number of economic and social measures to reverse this unfortunate trend with a view to ameliorating the living conditions that force young Nigerians to migrate.

During her meetings, she was informed that out of the 26 dead girls, only three were positively identified as Nigerians while the other 23 were from other nationalities. She was also informed that two persons have been arrested in connection with the incident.

As at the time she left Italy, the Nigerian Embassy was still awaiting a formal response to the request for a proper report on the matter from the Italian authorities especially with regard to the number of identified Nigerians and their identities.