“Nigeria can keep ignoring her youths, but Nigerians cannot do without us. They may have the money and power, but we have the voices and the votes.” – Social entrepreneur and youth activist, Toyosi Akerele-Ogunsiji For French citizens reeling under the whiplash of former President Francois Hollande’s disastrous rule, last Sunday’s Presidential election came as…”
Editor
Op-Ed 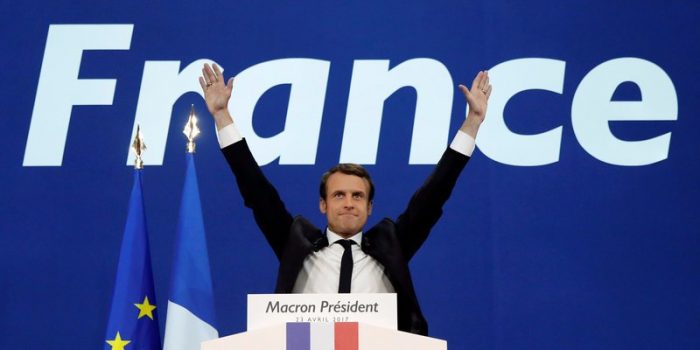 “Nigeria can keep ignoring her youths, but Nigerians cannot do without us. They may have the money and power, but we have the voices and the votes.” – Social entrepreneur and youth activist, Toyosi Akerele-Ogunsiji

For French citizens reeling under the whiplash of former President Francois Hollande’s disastrous rule, last Sunday’s Presidential election came as a burst of fresh air in a setting that was desperately scorched and blighted. The woes, soaring unemployment, repeated terrorist attacks and a badly managed economy were well advertised during the recent campaigns, which saw France groping for renewal and fresh direction.

For many around the globe, the defeat of the extremely conservative Marine Le Pen of the National Front Party, who campaigned on an anti-globalisation and a ‘France First’ agenda that was reminiscent of President Donald Trump of the United States, was welcome relief.

For Nigerian youths basking in an emergent demographic advantage and contending against centuries of rule by the aged, the victory of 39 year-old Emmanuel Macron has accelerated their increasingly vocal drive for the top position.

Recall that when 31 year-old Mark Zuckerberg, the Founder of Facebook, reportedly worth over 40bn dollars came calling in 2016, his endorsement of the innovativeness and creative hustle of our youths resonated with them and led to fresh demands for inclusive politics, with affirmative action to redress the skewing of the political field in favour of old men and women.

Earlier on, Nigerian youths took the Muhammadu Buhari administration to task for its failure to appoint young men and women into his cabinet. The justification provided for the omission by Vice-President Yemi Osinbajo that the youths lacked outstanding political talents did nothing to appease an increasingly restless social category staking claims to national leadership.

Toyosi Akerele, social entrepreneur and post-graduate student at Harvard University, Boston, Massachusetts, USA, conveys the sense of disillusionment and outrage that Nigerian youths increasingly articulate about their marginalisation in the scheme of things. It is pertinent, therefore, that Macron’s upset victory against an establishment set in its ways, has given impetus to Nigerian youths increasingly calling for a rearrangement of the political space.

In the last few days, the social media have been awash with discussion of the prospects of our youths creating a political movement in the mould of Macron that will power one of them to office in 2019. It is even more remarkable that Macron’s political movement, created barely 12 months to his election, became the vehicle of his political ascendancy and election. Nigerian youths are chanting, in response, why can’t we repeat the Macron miracle here? Before delving further into this animated discussion, this columnist craves the reader’s indulgence to offer a short take.

Most readers are familiar with the despairing refrain that the teacher’s reward is in heaven. Two eminent Nigerians, former Minister for Education, Dr Oby Ezekwesili and Vice Chancellor of Federal University, Oye Ekiti, Prof. Soremekun, obviously do not think so. Last Thursday, Ezekwesili advocated the prioritisation of the quality of teachers as a key to rehabilitating the education sector. She said, “The quality of the teachers in a classroom determines what the student learns, no matter how sophisticated the school is”.

What then, is the approach to raising the quality of teachers? Soremekun, a former Fullbright Scholar and professor of International Relations, partially answered this question, when at the maiden convocation of FUOYE, three retired principals were conferred with honorary degrees. The academic explained that his university decided on this mould breaking policy, because, to quote him, “We are de-emphasising the mercantilist and cash-and-carry mentality of giving honorary degrees to the rich and powerful. There are many people contributing to the development of this country, but nobody is recognising them”

The event found a responsive echo in the venerable principals, who said that the honour indicates that the teacher’s reward is no longer in heaven. Having blazed a trail, FUOYE should even go further to create a forum where the wisdom and discipline of committed teachers, such as those honoured, can be imparted to the present generation of teachers and lecturers who have much to learn from them. Meanwhile, the institution deserves kudos for setting an edifying example.

To return to the main discourse regarding our youths, it should be pointed out that much can be said for the emerging political culture of electing young men and women as leaders of nations. Before Macron, the youngest president to rule France since Napoleon Bonaparte, we had Justin Trudeau, who was elected at the age of 43 as Prime Minister of Canada in 2015. There was also David Cameron, who at 43 became the British Prime Minister but left office last year in the wake of BREXIT. Many will also remember Alexis Tsipras, who became the Prime Minister of Greece three years ago at 40.

To be sure, there are also old men and women who vie for political office as the case of Trump who is 70 years and Buhari who was elected at 73 years, indicate. It may well be, however, that the balance of evidence is increasingly on the side of relatively youthful leaders, who have the energy to drive and see through important political changes.

In the case of France, even if Macron’s opponent, Le Pen had won the election, the country would have had a President who is 48years old. It must be said that youth is not necessarily a predictor of performance or good governance, as there had been young politicians who performed very well and others who performed woefully. Much cited on the African continent are the distressing cases of Yahya Jammeh, who bacame the Gambian President at 29 years, but had to be forced out of office earlier this year by an international upheaval. There is also the case of Joseph Kabila, President of Democratic Republic of Congo, who took office in 2001 at the age of 29, but whose rule and self succession can hardly be seen as exemplary.

Fundamentally, the prospects of youths making landmark political changes are functions of factors, such as their intellectual capital, as this relates to ideological conviction, moral stamina, preparation for office and the power of institutions to act as checks on their tendencies for impetuous interventions.

Indeed, several commentators have suggested that Macron is too ideologically vacuous and nebulous, regarding programmes, to turn France around. But time will tell. As far as Nigerian youths are concerned, they should bear in mind that the young men and women who emerge as their country’s leaders are not greenhorns but have a period of apprenticeship.

Trudeau leveraged on his father’s political dynasty, while Macron cut his political milk teeth as a protege of Hollande, who appointed him as Minister for the Economy and Information Technology. This suggests that our youths must double down on their periods of training at the feet of the established, even if they end up overthrowing all that they stood for.

Finally, if the youth leadership project must fly, it will have to wrestle successfully with the demons of religious, ethnic and geographical polarisations that have acted as brakes to the nation’s ascent to greatness. That said, this columnist wishes the youths success in their journey to political primacy.

Lagos And The ‘Resurrected’ Awo By Tayo Ogunbiyi