It troubles one to observe that Nigeria’s clean weekday newspapers metamorphose into lewdpapers at weekends. Saturday and Sunday when you look forward to domestic company with child-friendly weeklies, you are trapped in an oppressive nightmare, wrestling with nudepapers.They flaunt naked images of female bodies not healthy for impressionable young minds. But these expressive photos also…”
Yusuf
Op-Ed 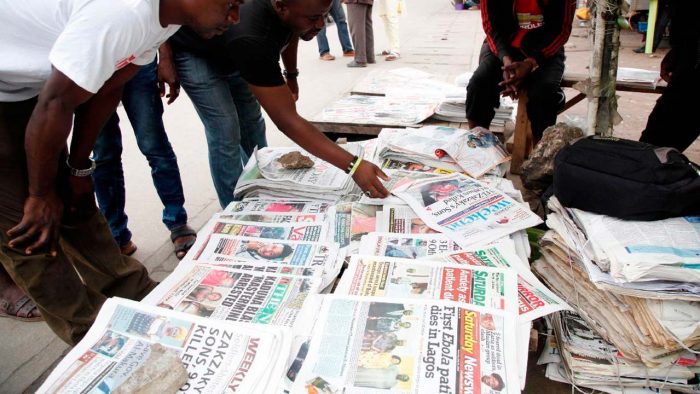 It troubles one to observe that Nigeria’s clean weekday newspapers metamorphose into lewdpapers at weekends. Saturday and Sunday when you look forward to domestic company with child-friendly weeklies, you are trapped in an oppressive nightmare, wrestling with nudepapers.They flaunt naked images of female bodies not healthy for impressionable young minds. But these expressive photos also harm the larger society with destructive far-reaching consequences: they devalue the dignity of our womenfolk; they offer false and ungodly standards about intimacy between man and woman; they trigger an unending chain of loose moral conduct among the youths and the adults.

We appear to have become quite tolerant of this creepy soft and hard pornography on the sacred pages of our newspapers. It used to be a coy feature in the gossip outlets and fashion magazines in the local media. Later, our submission to the decadent values of the capitalism of the Western world took us to an adventurous and bolder threshold that led to the publication of wholesale underground cover to cover magazines trading in sex.

It’s only a button away on your Palm device. Of course, it’s one’s choice to visit such sites or resist the urge and recoil from it. No one takes your finger there. But this line of defense isn’t acceptable because we need to protect our vulnerable youth and society from easy exposure to potential peril. We can’t be fence sitters if there are threats to our collective cultural purity, sanity and morality such as lewdpaper journalism poses.

There is a palpable danger to our humanity. Our traditional values will go under if we are sold to consuming depravity and licentiousness that manifest in displaying sensitive parts of the body that ought not to be so profaned. That is where you find the difference between sedate civilization and its antithetical obscenity. It is disingenuous to suggest that posting pictures of couples in lovemaking act, half-clad females, models in thigh-high slits and those baring their breasts along with graphic literature on sex is part of the information and education as well as entertainment agenda of the media, which the Nigerian Constitution guarantees. It speaks of freedom of expression, information (and dissemination) and access to it. But it isn’t unfettered freedom. For instance, despite the acclaimed principle of fundamental human rights, the law doesn’t give one the freedom or right to take one’s life.

When a man is given to porn, he is in a merciless three-fold hold. He has dehumanized himself because he is prey to fantasy and futile chase for gorgon goddesses who won’t spring alive from the screen or the nudepapers. His wife would no longer please him since she has paled beside the newfound youthful sex object in the pictures he is served every weekend. It is the beginning of the breakdown of the home—and alas of society. Secondly, an early authority, Jeff Olson, had this to say: “as pornography pollutes the mind, it often turns into an enslaving… an addiction where there is a ‘continual lust for more’… an addiction to pornography doesn’t happen overnight. It sneaks out on a man over time…”

Play The Game According To The Rules – ES Charges Parliamentarians

JUMAT SERMON: The Concept Of Morality In Islam