How Lebanese Town Is Built With Nigerian Money

With the revenues earned in Lagos or Abuja, Lebanese expats build ostentatious villas in the village of Miziara back home. Chloé Domat reports MIZIARA, Lebanon – The picturesque, two-hour drive from Beirut to Miziara follows the coast up north through windy mountain roads and crosses a familiar landscape of orange tree orchards and olive-tree fields. Similarly,…”
Yusuf
Entertainment News 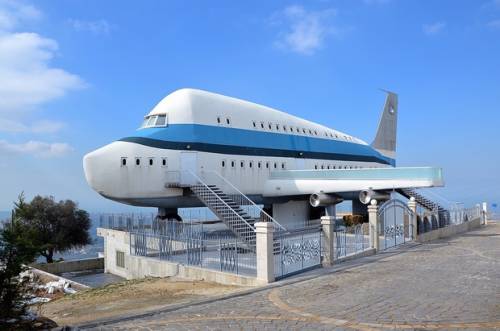 With the revenues earned in Lagos or Abuja, Lebanese expats build ostentatious villas in the village of Miziara back home. Chloé Domat reports

MIZIARA, Lebanon – The picturesque, two-hour drive from Beirut to Miziara follows the coast up north through windy mountain roads and crosses a familiar landscape of orange tree orchards and olive-tree fields.

Similarly, the main square with its stone church, local Venture deeper though, and a surreal picture unfolds, as hundreds of extravagant villas with extraordinary designs surprise the eyes: welcome to Miziara.

Taking pride of place is an Egyptian pyramid with small square windows that houses 21-year-old student Oussama Raymond Chagoury, his mother and five brothers, while his father works in advertising in Nigeria.

“A lot of people find our home weird; they ask about it but for me it’s normal,” Chagoury said. “Actually it has nothing to do with Egypt, my father just liked the idea of living in a house with inclined walls.”

Without a doubt, the most bizarre mansion is a perfect replica of an Airbus A380, which residents call “the aeroplane house”. The home was built by a couple in the 1970s that now reside in Australia and boasts two floors, 41 portholes on each side, as well as a cockpit and landing wheels.

Just up the road from these creative habitats, there is a four-storey castle with a mix of medieval towers, Ottoman arcades and modern windows, while another family chose to settle for a Greek temple with eight Corinthian columns.

Given that Lebanon’s GDP per capita is barely over $8,000 a year, the eye-watering prices of these houses is even more surprising than their architecture.

“Building a house here costs no less than $2 million,” Fadi Abboud, an architect from the village said.

As in the surrounding villages, Miziara’s local economy relies on a bit of tourism, modest agriculture and some services. However, it is its links to Nigeria that bring its good fortune and, some would say, its flamboyance.

Deputy mayor Pierre Daaboul is very straightforward about it.

“Everything was built with money from Nigeria; our entire economy relies on emigration to Western Africa. Today, about 80 percent of the village works there because they make much more money there than here,” he said in a strong French-African accent.

Lebanese expatriates work in all kinds of sectors, including trade, telecommunications, hospitality, energy, and construction – even the deputy mayor’s son, daughter and three brothers are currently in Nigeria.

With the revenues earned in Lagos or in Abuja, Lebanese expats from Miziara like to build ostentatious villas.

“Why? Because we like to show-off. A big house is a way to show that you are rich and successful,” explained Daaboul.

When his cousin Elias Daaboul made it big in the Nigerian oil sector, he did exactly that. With $20 million, he built the largest house in the village: a 2,000 square metre palace with 30 bedrooms, a swimming pool, a dome, statues, marble floors, wood carved doors and moulded ceilings.

“He didn’t even spend an hour in this house,” said a neighbour, who does not seem surprised that the mansion’s shutters are always closed.

Most of Miziara’s villas are uninhabited and are a way for expatriate families to state their achievements back home, without actually ever serving as housing.

The deputy mayor feels confident that one day in the future, wealthy owners will come back.

“We see them a bit every year for special occasions like Christmas or on holidays. You know, Africa is not like Europe or the United States, it’s a place where you work, but the life is not good so we always end up coming back to Lebanon,” he said.

A country of diaspora

For most of the Lebanese, being successful abroad is an element of pride. The country has a diaspora of over 10 million people compared with only four million within its borders.

This has a crucial impact on the Lebanese economy. In 2015, almost 16 percent of the country’s GDP came from personal remittances from Lebanese expatriates.

According to a recent IMF report, “Remittance inflows have averaged almost $7 billion in the last 10 years, which places Lebanon in the world’s top 20 receivers in absolute terms (…) in per capita terms, Lebanon tops the list by a wide margin.”

If a majority of the Lebanese working abroad are in other Arab countries, the report states that remittances from Africa account for almost 15 percent of the total inflows.

The Ministry of Foreign Affairs considers that there are about 30,000 Lebanese living in Nigeria, but other estimations raise this figure to 75,000.

In the case of Miziara, Lebanese migrants first settled in Nigeria during the 1930s. Among them were the parents of the village’s allegedly most famous person.

Born in Lagos in 1946, Chagoury heads the Chagoury Group, a multi-faceted conglomerate that employs over 10,000 people in a variety of sectors including real estate, telecommunications, healthcare and flour mills.

The group is currently in charge of developing Eko Atlantic, the largest real estate project in West Africa. Spread over 10 million square metres on the coast of Lagos, this brand new luxury district is expected to accommodate 400,000 wealthy residents as well as corporate offices and retail businesses.

Chagoury’s personal assets are valued at over $4 billion, making him one of the wealthiest people in Africa. A skilled businessman is also a man of influence with close ties to the Clinton family in the United States.

Chagoury has other surprising lines on his CV. He has been an ambassador of the Caribbean Island of Saint-Lucia to UNESCO in Paris as well as to the Vatican; and economic adviser to the former president of Benin, Mathieu Kerekou.

In his spare time, the billionaire claims to be an art amateur whose generous donations to the Louvre Museum in Paris have ensured a gallery has been named after him.

But there are also dark sides to his career. One major element of controversy was his relationship with former Nigerian dictator Sani Abacha, who allegedly stole $4 billion worth of public money during his mandate.

The Swiss judiciary opened a legal case against Abacha’s family, relatives and colleagues after Abacha died in 1998, including Chagoury, who was involved in the case and convicted for money laundering. He paid a fine of $600,000, and gave back $65m to Nigeria, according to the LA Times.

In Miziara, Chagoury’s activities are no longer the subject of debate. He is by far the number one employer in the village and his reputation is untouchable. Out of gratitude perhaps, the main street was recently renamed “Boulevard Gilbert Chagoury”.

Like everyone in Miziara, the local hero owns a mansion, the relatively modest Villa Alexandra. He stays there occasionally with his wife – who is also from the same village – and his family.

According to municipality figures, more than 300 houses were built in Miziara since 2008, but with the recent drop in oil prices and an economic crisis in Nigeria, new projects are slowing down.

But Chagoury’s status as the village’s benefactor is untouchable it seems.

“He was there last week – you missed him!” said the deputy mayor. “He is like a godfather to us. He can do whatever he wants at the municipality, no need to be elected,” he added with a large smile.

The largest villa in Miziara has 30 rooms and costs $20 million. The owner is Elias Daaboul, a Lebanese businessman who made a fortune in the Nigerian oil sector (MEE/ Chloe Domat)

“Attack On The Nation Unjustified” – Aregbesola