We Have Laid 50 Years Destiny Foundation for Osun – Aregbesola

By Kehinde Ayantunji The Governor of the State of Osun Ogbeni Rauf Aregbesola, said on Wednesday that his administration has laid 50 years foundation for the prosperous future of the state in Education, Health, Economy and Infrastructure development. Aregbesola said his administration is conscious of the global contemporary future challenges and understand that innovations and technology will…”
Editor
featured hero News Osun 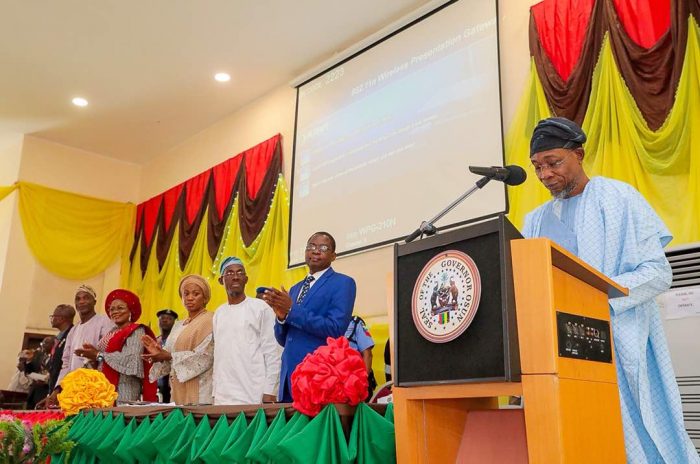 The Governor of the State of Osun Ogbeni Rauf Aregbesola, said on Wednesday that his administration has laid 50 years foundation for the prosperous future of the state in Education, Health, Economy and Infrastructure development.

Governor Aregbesola said this in Osogbo during the official Presentation of Awards and Prize to the winners of State Calisthenics Competitions held in the 9 Federal Constituencies in the state.

Governor Rauf Aregbesola, and winners of the State of Osun Calisthenics Competitions which held in the 9 Federal Constituencies in the state.

The governor while rolling out his achievements in education which includes building Model Schools, Free School Feeding, Free uniform and distribution of Tablet of knowledge said his administration in the last seven years have raised the bar of governance and build a very solid enduring social –economic foundation for the prosperous future of the state.

He explained that the world in the coming decades is going to be tough, competitive and knowledge driven saying any society that relegates education and innovations will suffer unimaginable social and economic depression.

According to him “We are committed to functional and qualitative education not because the resources are available, but to secure a better future for the incoming generation that there survival would be determined by the quality of knowledge”.

“ It is clear that man power is globally becoming irrelevant, in the next 10 years, there will be a car that will not need a driver, so if any one choses to be a driver, He may not get job, in the next 10 years, Robot will be planting  farm seeds in large quantity so if any one choose to be a labourer, he or she may not get job”

Alhaja Sherifat Aregbesola, the First Lady of the State of Osun presenting cheque to one of the winners of Calisthenic competition.

“In the last 400 years , if someone said it that there would be a plane flying on the air space, they will just be looking at the person been insane but we have drones now that can fly without the help of a pilot, in our generation some are Motor Drivers and they are successful, some are labourer and they are successful but the incoming generation will never succeed without quality knowledge and education.”

“ Therefore our administration will not spare any efforts in promoting quality education and mode good character with unity of purpose, collective responsibility, discipline and precision that calisthenics teaches”. He said.

Aregbesola stated  that Osun is the first state to organised calisthenics competitions in Nigeria to create more awareness and institutionalized the programme as part of the school curricular saying the sport never affected the normal school activities of the students.

Speaking earlier, the commissioner for Education, Mr Omotunde Kola  said the state first held the Calisthenics programme in 2012 to mark the 21st anniversary of the state with the aid of the Cuban consultants to train 8, 000 students but subsequent events were organized by the local coaches who are teachers of the secondary schools.

He said the just concluded competition across the state was on volunteering basis adding that the parents provided the sport kits for their children which reduces the government expenses on the competition.

A Cross Section of Participating Schools at the Event

The government presented N1,000,000 Cheque to the Winner in each of the 3 Senatorial Districts, and N750,000 to the first runner up while the second runner up got N500,000.  Ede/ Ejigbo Egbedore Federal constituency came first in Osun West, Ikire and Iwo federal constituencies came second and third respectively.