Lagos State Government has reopened the popular Ladipo auto spare parts market after it was shut last month for sundry environmental infractions, including improper waste disposal and several unhygienic practices. The market has now been reopened for business by the Lagos Waste Management Authority (LAWMA), after substantial compliance with rules and regulations, to sustain a…”
Yusuf
Economy News 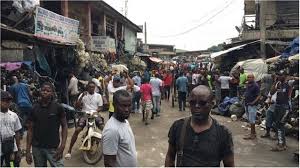 The market has now been reopened for business by the Lagos Waste Management Authority (LAWMA), after substantial compliance with rules and regulations, to sustain a clean and hygienic environment in the market.

LAWMA’s Head of Public Affairs, Hakeem Akinleye, who spoke on behalf of the Managing Director of LAWMA, Mr. Ibrahim Odumbomi, said the market was reopened having met the demands set for the resumption of business activities there.

According to him, the leadership of the market has signed an undertaking not to breach any environmental laws or the extant laws of the state will be brought to bear on them.

The LAWMA boss maintained that the Authority would not condone any form of indiscriminate waste dumping and other environmental infractions, especially at market facilities across the state, adding that such acts had attendant negative consequences on the environment and residents.

He said further that LAWMA would continue to monitor the situation at Ladipo market and other marketplaces, to ensure full compliance with the environmental laws of the state, warning that the Authority would not hesitate to shut errant shopping centers found to pose dangers to the environment.

2018 Budget To Be Signed Next Week

Just In: Six Dead As Gunmen Invade Village In Osun