Kevin Spacey is sure not having it easy with the sexual harassment charges being thrown at him by young men in the movie industry. His career might as well go down the drain with the new development.   A man has accused the House Of Cards star of trying to rape him when he was…”
Editor
Entertainment 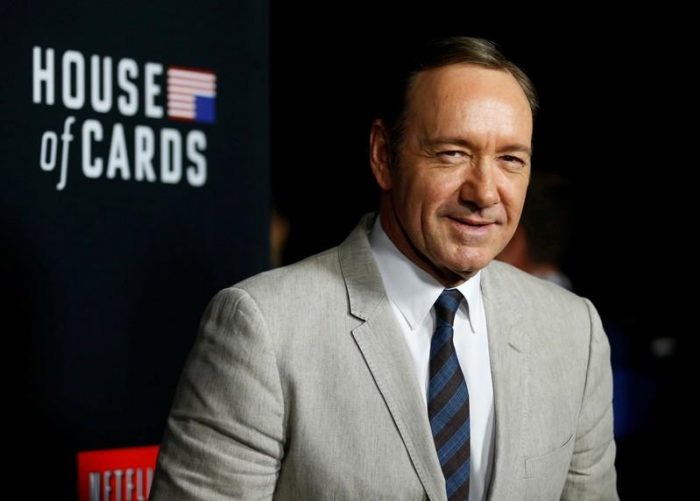 Kevin Spacey is sure not having it easy with the sexual harassment charges being thrown at him by young men in the movie industry. His career might as well go down the drain with the new development.

A man has accused the House Of Cards star of trying to rape him when he was 15, amid mounting allegations of sexual harassment and assault. In an interview, the man, who spoke on condition of anonymity, said he took part in an acting class taught by Spacey when he was 12.

Two years later, they began what the man described as a “sexual relationship”. Then when he was 15, Spacey tried to rape him at his flat, the man said, after which he ended the relationship.

“I would call him a paedophile and a sexual predator,” he said.

Eight people who worked on the political drama House of Cards meanwhile told CNN that the actor engaged in sexual harassment on set, typically targeting young men, while one of the eight said Spacey sexually assaulted him.

Admits the sexual assault charges, Spacey’s talent agency has dropped him. According to the source, Creative Artists Agency had parted ways with the Oscar winner.

Staci Wolfe, a spokeswoman for Spacey, wasn’t available for comment. Deadline, which reported CAA’s decision earlier, said that Wolfe also cut ties with the actor. Spacey created a toxic environment for workers on the television show, CNN reported, citing interviews with eight people who work on the show or used to.

A former production assistant told the network that Spacey sexually assaulted him during one of the early seasons. All eight people spoke on condition of anonymity over fear of professional repercussions for speaking out, CNN said Thursday. One production assistant claimed that he was driving Spacey to the set when the actor put his hands down the assistant’s trousers.

“He was a man in a very powerful position on the show and I was someone very low on the totem pole and on the food chain there.”

Another crew member claims Spacey routinely touched him without consent.

“He would put his hands on me in weird ways,” the crew member said.

“He would come in and massage my shoulders from behind or put his hands around me or touch my stomach sometimes in weird ways that in normal everyday conversation would not be appropriate.”

Netflix, which carries House of Cards, and Media Rights Capital, the producer, suspended production of the show earlier this week after another actor Anthony Rapp, not part of the cast, alleged he was accosted in 1985 at age 14 by Spacey. Spacey issued an apology for that incident and was said to be seeking treatment.

As part of his apology, Spacey announced he was gay but angered many in the gay community and beyond who saw his announcement as an effort to divert attention from the accusation by Rapp. Rapp has said on his Twitter feed that he would have no further comment. Spacey’s representatives said Wednesday that the embattled actor was seeking unspecified treatment.

That announcement followed additional harassment allegations against him this week by Mexican actor Roberto Cavazos, who worked in the London theatre where Spacey was artistic director from 2004-2015, and US filmmaker Tony Montana. Montana, who first shared his story with Radar Online, recently told the Los Angeles Times that he was by himself in a booth at a now-defunct dive bar in West Hollywood making “paper edits” on a documentary, got up to get a drink and found himself talking to the actor at the bar. Spacey, he said, was making fun of a film he had just been doing press for, United States of Leland. Montana said he had never met Spacey before.

“He was slurring his words, saying, ‘Lee-land, lay-land, wanna get laid.’ He was joking and stuff,” Montana said.

“When someone who’s drunk and is joking, you let your guard down.”

Plus, he said, it was Spacey. “Kevin Spacey’s fine,” he thought.

Then, Montana said: “He got close to me and put his arm around me and moved in, so now I can feel his breath, and smell it, and then he grabbed me, hard” on the genitals and told the filmmaker: “This designates ownership”. Montana said he pulled Spacey’s thumb backward to get him to let go, then paid for the drink and went to the men’s room. Moments later, he said, Spacey walked in on him and practically fell onto him. “It was a urinal. So I’m trying to get away from a guy who’s grabbed me like that, and then I’m going into a urinal to expose myself, and he comes in? I get a double whammy?” Montana said, adding that he pushed Spacey backward out the bathroom door, where one of the actor’s friends steered him away.

Montana said he had post-traumatic stress symptoms that lingered after his own alleged incident – including when he would see Spacey in the media or hear the actor’s name brought up for consideration at a business meeting – feelings that had welled up again as he talked about it publicly. Montana said that by coming forward with his story, he was just “trying to work through” what happened to him.

“I’m not going after Kevin for money. I don’t wish him any ill will,” Montana said.

“It’s just … he did something 14 years ago that’s affecting not only him but all the people who work on that show.”

PHOTOS: Younes Bendjima And Kourtney Kardashian Step Out Together In Rome

Davido Celebrates His Fathers Birthday With a Bentley(Photo)