Jada Pinkett Smith Speaks About Her Biggest Regret In Life

Jada Pinkett Smith had an emotional conversation with her husband Will Smith’s first wife Sheree Zampino Fletcher as she opened up about her biggest regret in life. She confessed that her regret dating Will while he was still married to Sheree. During the premiere of her new Facebook Watch series, Red Talk Table, Jada, 46, who…”
Editor
News 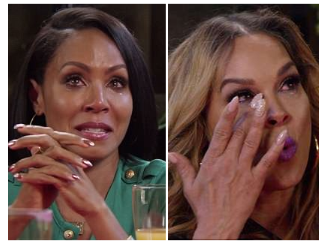 Jada Pinkett Smith had an emotional conversation with her husband Will Smith’s first wife Sheree Zampino Fletcher as she opened up about her biggest regret in life.

A tearful Jada said: “Because I did not understand marriage. I didn’t understand divorce. I will say that I probably should’ve fell back.”

At that, Sheree snapped: “You think?”

Jada then goes on to explain how it took time for her to realize that she was behaving “insensitively” and “inconsiderately” as Sheree and Will’s marriage was “unwinding” and she [Jada] was just “trying to get in there.”

Sheree also recalled a time she and Jada exchanged words over the phone before hanging up on each other.

Sheree said: “I called back and happened to say, ‘bitch, you living in the house I picked out!’ And you said, ‘It’s my house now’.”

Both women laughed at this, then Jada revealed that Will really scolded her when he heard about the fight.

Jada said: “His take was, ‘That is Trey’s mother and that’s just not your place’.”

Sheree also recalled how her son with Will Smith, Trey, who is now 25, reacted to meeting Jada for the first time.

“So Trey comes home and I said, ‘How did you like Miss Jada?’ He said, ‘I really liked her, Mommy’,” Sheree recounts.

She adds: “Thank you for loving my baby…I’ll tell you, on this side of things, my son could not have a better bonus mom.”

EDITORIAL: Governors And The Economy