By Sodiq Yusuf The love for Humanity is undoubtedly the essence of mankind. It is a rare and genuine attempt to put smiles on the faces of fellow human beings. The axiom that ‘fingers are not equal’ underscores the need for those who have to give those who do not have. Scripturally, giving or providing aid to…”
Yusuf
featured Op-Ed 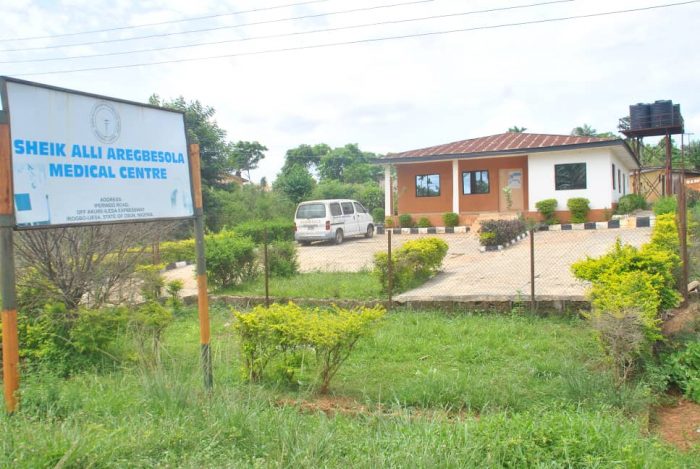 The love for Humanity is undoubtedly the essence of mankind. It is a rare and genuine attempt to put smiles on the faces of fellow human beings. The axiom that ‘fingers are not equal’ underscores the need for those who have to give those who do not have.

Scripturally, giving or providing aid to fellow men, no matter how little is an endeavour expected from any individual who seeks mercy from the Almighty. Some of those aspects which define the love of humanity is the provision of basic necessities like food, clothes, water and healthcare delivery.

These necessities, no doubt are the responsibilities of government, but sometimes are provided by well- meaning individuals to assist the efforts of those constitutionally empowered to do so.

Taking a cue from his forebears, Ogbeni Rauf Adesoji Aregbesola in 2007 with the help of his siblings initiated and built the Sheik Ali Aregbesola Medical Centre, Irogbo-Ijesa in Atakunmosa West Local Government Area of the State of Osun. Named after his grandfather, the health centre was part of the numerous contributions of a son of the soil who had not even successfully realized his governorship ambition.

Since his early days, Aregbesola, who lived in Ikare-Akoko, Ondo State with his father, Rufai Ali Aregbesola for business reasons had followed the thread of honesty, philanthropic gesture, religious piety, selflessness and a deep sense of commitment to the development of humanity.

To many people, the former Governor’s goodwill and gestures started when he signified his intention to run for occupancy of the Oke-Fia Government House in 2005. That is wrong! The young ‘Rauf’ had been towing the path his parents had shown him in being a development mobilizer and a man of many parts.

A rare breed to the core, Aregbesola and his siblings, long before his coming on board as the Chief Executive of the State of Osun, his fond indigenous state; had been committed to keeping alive the legacies of their deceased parents. In demonstration of their love to the community that reared them from infancy through childhood to adulthood, they donated a modern health centre, fully equipped with modern equipment, facilities and quality drugs.

In addition, the health centre is endowed with trained, qualified, competent and experienced staff of required sorts. The Sheik Ali Aregbesola Health Centre, Irogbo Ijesa renders its services and distributes its drugs and consumables free of charge and even goes a step further to offer gifts to patients, especially mothers and their babies who delivered at the centre. The health centre has out-patient wards, in-patient wards, mini-theatres for minor operations, ante-natal wards and offices for visiting medical consultant and nurses. In addition, the health centre has facility for a borehole and a stand-by electricity generating plant.

When OSUN DEFENDER visited the health centre in Irogbo-Ijesa, it captured the mood of the residents who expressed gratitude to the visioner of the project. They held that the facility, since inception, has afforded them basic medical care free of charge.

A septuagenarian, Mrs. Racheal Animasaun told OSUN DEFENDER that the health centre provides reliable and efficient healthcare delivery to the people of the area.

Animasaun said: “The health centre has been a blessing to us. The health workers there take care of me, give me free drugs and ensure I am healthy. Their services are free, even for people from other places like Ilesa, Ijebu-Ijesa, Ipetu-Ijesa, Iperindo, Ekiti and other neighbouring communities. We are grateful to Aregbesola for what he has done for us.”

Another beneficiary of the Sheik Ali Aregbesola Medical Centre, Mr Toyin Ajayi, a 50-year-old teacher who is also the Secretary of the Irogbo community lauded the Minister of Interior’s quest for the welfare of his people.

According to Ajayi, “at inception, we had no maternity as a major town in the local government. We had sought for Aregbesola’s assistance in 2004 and he promised to give us this maternity which he did. The motive at first was to hand it over to the local government. As far as I know, the facility was in full operation till December, 2019. I have a card with them.”

“When I went there for treatment, I was taken care of very well. In fact, when my daughter was sick, she was taken there and was attended to very well. This health centre serves not only Irogbo but Ijesaland and beyond. I met a woman who came from Ikinyinwa in Ibokun Local Government. The medical facility serves people from the six local governments in Ijesaland which I can confirm to you.”

“The staff there are professionals and well behaved. We cannot but thank Aregbesola who God has used to give us this facility that has put smiles on the faces of thousands of people in Ijesaland and beyond.”

The Matron of the centre, Mrs Funmilayo Ayodeji,  a Senior Community Health Extension Worker who started working at the facility in 2008, noted the health centre has aided the welfare of not only the people of Irogbo but the entire Ijesaland.

Ayodeji said although the influx of patients have reduced due to the current lockdown, but addressing challenges of security, means of transportation for health workers and other incentives will boost the current level of performance of the medical centre.

“Since 2008 when we commenced full operations, people have been coming to patronize us. They find our place very okay because we do Cesarean Section some times. People come from Ilesa and environs. The influx of pregnant women has reduced since 2013 when we stopped free ante-natal care and provision of delivery kits to them. But people come for the normal everyday treatment which we have maintained its provision free of charge.”

“We attend to about 60 persons daily but since the lockdown started, we have been attending to like 20 persons per day. All our facilities are functioning well. The Aregbesola family has since been maintained constant supply of drugs, kits and other needed financial support to us.”

“We are challenged security-wise. We need security. Our official vehicle was vandalised sometimes last year because we did not have security. We need a night guard for the health centre as well as a driver to take us to and fro. We have complained to the management and they promised to look into it for us.”

The major challenge we have is that of our vehicle. There was a time when some pregnant women would go into labour and would find it difficult to get to the health facility. There are times we have to trek a far distance to Ilerin before we can get transport back home. We really need a driver to drive the available bus we have. The community has been very supportive.”

The Health Centre was initially intended to bear the name of Sheikh Alli Aregbesola. It was in the face of stiff antagony and opposition by the powers-that-be in the Peoples Democratic Party (PDP)-led administration in the state then that the name Health Centre, Irogbo Ijesa came to be adopted. It was for selfsame reasons that the approval and licensing of the health centre by appropriate authorities in those days suffered some set-backs.

Irogbo Ijesa is the ancestral settlement of indigenes of Ogbon Arogbo Quarters of Ilesa. That village is the home of the Aregbesolas. It is located in the present-day Atakunmosa East Local Government Council Area of the State of Osun. During his lifetime, Pa Alli Aregbesola was said to have always been at the front-burner of growth and development. The biological grandfather Rauf Aregbesola, he was a great farmer, a statesman, an Islamic cleric of note, a great peace-maker, a community leader, a bridge-builder and a lover of his people