The Implications Of Buhari’s Second Term Declaration By Muhammad Ajah

Another historic event occurred in Abuja, the capital city of Nigeria, on Monday April 9, 2018, at about 11 am, when the President of Nigeria, Muhammadu Buhari declared at the meeting of the national executive committee (NEC) of the ruling All Progressives Party (APC) his intention to run for a second term in the 2019…”
Editor
Op-Ed 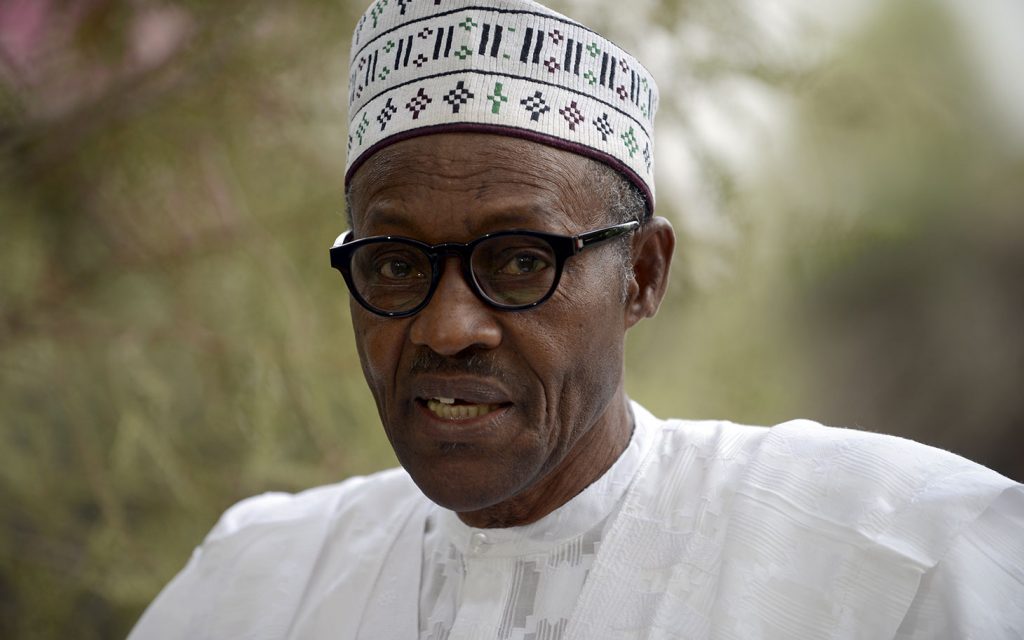 Another historic event occurred in Abuja, the capital city of Nigeria, on Monday April 9, 2018, at about 11 am, when the President of Nigeria, Muhammadu Buhari declared at the meeting of the national executive committee (NEC) of the ruling All Progressives Party (APC) his intention to run for a second term in the 2019 Presidential polls. The wide jubilation that followed this episode across the country, though expected, has rung a bell of confidence the Nigerian populace has in the President. It has also sounded a warning to those who are hell-bent in causing harm to Nigeria.

I could not hold my emotion as I immediately posted the news to the many Whats App groups I belong to and received within few hours over a thousand responses. I will relate some of these responses from friends across the country later. Due to official workload, I could not read them during office hours but I must confess that it took me over two hours at home to go through the messages many of which were from whom I do not personally know.

The choice of this topic was quite difficult for me, especially considering the situation Nigeria finds itself. It is clear that there is unabated advocacy between the Nigerian people and a Nigerian powerful political group. So, I was in a fix to choose from the words “complications, juxtapositions or lamentations” of Buhari’s declaration. Whichever of the words that fits the article is apt, so long the end is justifiable. The declaration has complicated issues for some people. It has been juxtaposed with great events happening around. And it is serious lamentation for others. Generally, the implications of the declaration have far-reaching effects and results under our present circumstances.

Though having long been awaited by compatriots, it is coming at a time when some disgruntled prominent citizens have decided to mislead citizens from the good path to development which Nigeria is currently towing and disabuse the minds of patriots against the pilot of this new dawn democracy in Nigeria. Of most prominence against the reelection bid of the President are Chief Olusegun Obasanjo who sought, against constitutionality, for a third term but was frustrated out, Gen. Ibrahim Babangida who stepped aside from military rule with glaring hope of coming back to power under democracy, Theophilus Yakubu Danjuma whose tenure as minister of defence witnessed unprecedented massacre of armless citizens and some others who are being relieved by the current government of some assets and properties belonging to Nigeria. Now that the die is cast, we must pray harder for Mr. President, for Nigeria and for the will of God and the masses to prevail. Those threatening brine and stone will be put to shame because the general elections will come and pass and Nigeria will remain intact, stronger and united. After all, the pastors of doom who wished Mr. President death before 2019 have started falling.

Immediately after the declaration, I posted “President Muhammadu Buhari has officially declared interest to run for second term today Monday 09 April, 2018. It is very good news for Nigerians. May God Almighty make it come true. Join the winning train!” This was the simple message that generated traffic in my Whats App hubs, with majority replying to my prayers with ameen, repeated more than once by my respondents.

Unlike the former Presidents who preferred rented crowds for their declarations, President Buhari did it in a small hall before people he need not pay because they are patriots and the progressives. The President, in his wisdom, was sure that members of his party needed to have the honour of having the great news first. That is why when people were speculating that things had fallen apart between Buhari and APC because of appointments, I was confident that all fences will be mended in due course, mostly at the right time that will please every party member. And here the time has come. The humble leader has made the executives even happier because, as the leader of the party, he pleaded for waiver for any outgoing exco member who may wish to recontest for any position in the party’s forthcoming congresses at all levels. But the aspirant must follow the constitution by resigning the current position one month before the congress.

Again, unlike other past Presidents who would have preferred to announce such sensitive national statement in worship places, Buhari, who is accused by unrepentant religious bigots, did it in an open place where all cultural and religious interests are represented, at a closed-door meeting of the APC . And lastly, unlike other former President who used to keep Nigerians waiting with claims, through paid broadcasts and media decorations, of consulting God, President Buhari did his consultations silently without bordering the Nigerian citizens.

In mid February, the Secretary to the Government of the Federation, Boss Mustapha, hinted that the President will seek re-election in 2019. Though the engine room of the federal government, he spoke unofficially on the matter at the Unity Fountain in Abuja, while addressing a rally organized by the Democratic Youth Congress (DYC). He was certain that there was no alternative to Buhari whose stance against corruption and indiscipline, he said, was the main cause of panic from many people.

Buhari said he was seeking reelection on the accounts of the clamour by Nigerians. In his last visits to some states ravaged by herdsmen-farmers clashes, despite the situations, people of the state turned the visits to rallies as expressions of their supports for him. Furthermore, many groups, including blocs from amongst the governors and members of the national assembly had mounted pressure on him to declare for the second term. In addition, over three hundred non-governmental organizations had been holding rallies in Abuja and across the country in solidarity of the continuity of the federal administration.

In another twist, some groups had threatened to drag the president to court if he refused to recontest for the president. And there had been speculations that he may anoint a success, though that was an unpopular view. Senior special assistant to the President on media and publicity, Garba Shehu had proclaimed severally that the continuity of this administration will fast-track the nation’s development as Nigerians had waited eagerly for Buhari to run again. He lamented the huge resources wasted by the past administration and reasoned that Nigerians were eager for continuity for this administration that is providing massive infrastructure, power, railway, road and national security. “We are getting money and spending it on right priorities, maximizing Nigeria’s wealth”, he boasted, adding that efficient utilization of the nation’s resources will continue with the peoples’ endorsements of the President.

In November 2017, President Buhari gave an inkling of his interest while addressing the Nigerian community in Cote d’Ivoire. He made same clue in Kano in December last year. Many APC governors, ministers and party heavy weights like Abdullahi Umar Ganduje of Kano, Rochas Okorocha of Imo, Nasir El-Rufai of Kaduna, Rotimi Amaechi, Ogbonnia Onu, Orji Uzor Kalu, amongst others, have shown unhidden love for Buhari’s reelection. Against stiff opposition from Ekiti state governor, Kalu landed the state recently to campaign for Buhari’s continuity.

This declaration should relieve those who were interested in the position or make to rethink and join hands to uplift Nigeria with the trusted leader. The cabal in the government should accept the ideal. The likes of former SGF, Babagana Kingibe, Senate President, Bukola Saraki, former vice president, Atiku Abubakar, Senator Rabiu Musa Kwankwaso and even some governors have no option than to swallow their presidential ambitions.

Undoubtedly, President Buhari has all it takes to contest and coast to victory next year. His health is now sound. He is being encouraged by the local and international accolades over his fight against corruption and hot zest for development. We are glad of his recognition by the African Union which recently declared him AU’s Anti-Corruption champion.

Nigerians know Buhari for transparency, honesty and integrity. This declaration, I am sure, will propel him to fulfill most, if not all the promises he made in 2015. His change mantra will be translated into huge actions and development in the next few months. His uncompromising stand against corruption will never change despite the outcry from the affected looters. Though not of the talkative, he must not be cowed by the corrupt people who are afraid to be brought to book. And those who have looted the treasury of the nation should be followed by the security agencies. By God’s grace, Buhari will perform maximally in his second tenure and clear the criminals who are killing Nigeria.

Already the APC United Kingdom chapter has promised to pay for expression of interest and nomination form for the President to re-contest. Its spokesman, Jacob Ogunseye, in a statement in Abuja thumped up the declaration as the second term will make Nigeria stronger and preserve the tenets of democracy in the country. They group assured of working for the electoral success of the APC at all levels to consolidate Buhari’s achievements. “He deserves a second term and we are proud that he has declared to re-contest”, they said.

While the jubilations in Kano, Kaduna, Abuja, Nasarawa and many other states continue, many of my followers on the facebook and other social media are full of hopes that God has answered the prayers of Nigerians and are ready to cast their votes for Mr. President, while few are yet undecided, even as the opposition citizens say it is not going to be easy for the APC. And as the special adviser to the President on media, Femi Adesina puts it, “there are two options for those in contention for the presidency in 2019: run or run away”.

We Never Knew Akpabio Was Going To Meet Buhari – PDP