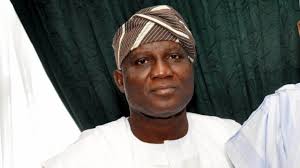 The Deputy Speaker of the House of Representatives, Hon Lasun Yussuff has denied reports that he is planning to leave the All Progressives Congress APC.

In a statement on Thursday, the Deputy Speaker affirmed that he is still a card carrying member of the APC who is not planning to leave.

He said despite the decision of a former Governor of the State of Osun, Prince Olagunsoye Oyinlola to leave the ruling party, Hon Yussuff maintained, he remains in the progressive fold.

Read The Full Press Statement Below:

The attention of the Deputy Speaker of the House of Representatives, Hon Lasun Yussuff has been drawn to rumours that he is planning to leave the ruling All Progressives Congress APC for the opposition, Peoples Democratic Party PDP.

The Deputy Speaker regards the insinuations as an imagination of naysayers and rumour mongers.

Contrary to reports that he will defect to another party with the action of Prince Olagunsoye Oyinlola this morning, He has not defected and neither do I have plans to leave the APC.

Neither has the Deputy Speaker at any point in time held clandestine meetings with Members of the opposition party especially the PDP that He will join their party.

The Deputy Speaker however urges members of the public to disregard any rumour and that he still remains a staunch member of the progressive fold.

For The Records: Full List Of Osun Commissioners And Special Advisers