The Inspector General of Police (IGP), Muhammed Abubakar Adamu, has commended the administration of Governor Adegboyega Oyetola for maintaining and sustaining the status of the state as one of the most peaceful in Nigeria. He said the feat of making Osun a state with lowest crime rate would not have been possible if not…”
Yusuf
featured News 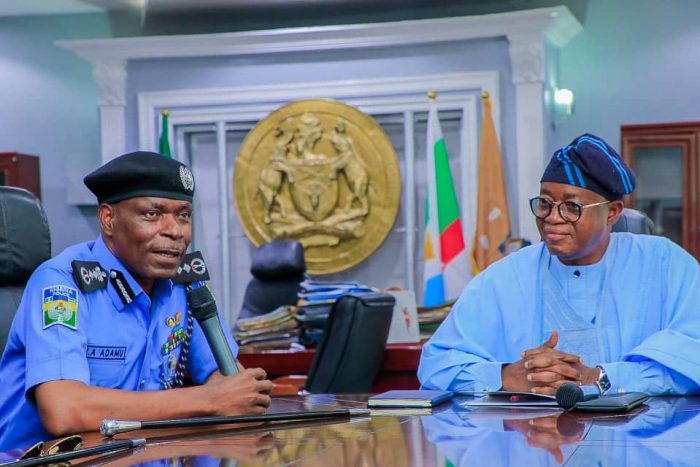 The Inspector General of Police (IGP), Muhammed Abubakar Adamu, has commended the administration of Governor Adegboyega Oyetola for maintaining and sustaining the status of the state as one of the most peaceful in Nigeria.

He said the feat of making Osun a state with lowest crime rate would not have been possible if not for the timely support of the government over the years.

The IGP gave the commendation on Tuesday when he paid a courtesy visit on the governor in his office, in Osogbo, the state capital.

The IGP who described the administration as “security-oriented”, noted that the logistics support received from the state government has been the motivation behind the performance of the officers and men of the police.

He lauded the passion and dedication of the state government towards the maintenance of peace, unity and stability, saying the inward and outward dispositions of the governor show that he is a man who is not only passionate about peace but wants nothing but peace for the state.

While appreciating the efforts of the governor at keeping the state safe, Mr. Adamu said the police was ready to partner with the government in further securing the state.

The IGP said he came to the state to sell the idea of community policing and to talk to the officers and men on the need to redouble their efforts in combating security challenge in the country.

“This visit is in addition to the Security summit that we had yesterday (Monday) in Ibadan where we gathered fruitful contributions and agreed to set up a Special Force to complement the efforts of the officers and men, specifically to target the forest where the bandits are operating from.

“We have resolved to work with other security agencies in fighting crimes, and I am happy that the governors have pledged to continue to support security agencies by buying vehicles and providing other logistics so as to enhance our capacity in combating crimes and criminality across the region.

“It is in view of this that i felt that it was necessary to pay the state a visit to further cement our partnership on the need to keep the state safe.

“I am equally in the state to pass the same message to our officers and men particularly on the resolutions that we have made from the Summit.

“I have encouraged our officers and men to do more in the fight against crime and criminality in the state. While we appreciate the effort you put to support the security agencies in the state, we want you to double your efforts because security is a very expensive venture, the more you put, the more it is needed for security to be achieved.

“We are ready to partner with you and give you all the support that is needed to make the state peaceful and to also tell you that we will come back to you about the Community Policing”, Adamu said.

In his remarks, Governor Adegboyega Oyetola expressed gratitude to the IGP for deeming it fit to visit the state, saying his visit is an attestation to the fact that the state is loved by the security agents.

Oyetola, who described the IGP as a resourceful and committed individual, lauded the civility effort of the police towards the maintenance of law and order as well as the protection of lives and property of the citizens in the country.

He lauded the community policing initiative of the Inspector General of Police, stressing that the state needs more personnel and area commands that could help in maintaining the status of the state as the safest in Nigeria.

EFCC Shocks Fayose, Asks Him To Report On September 20