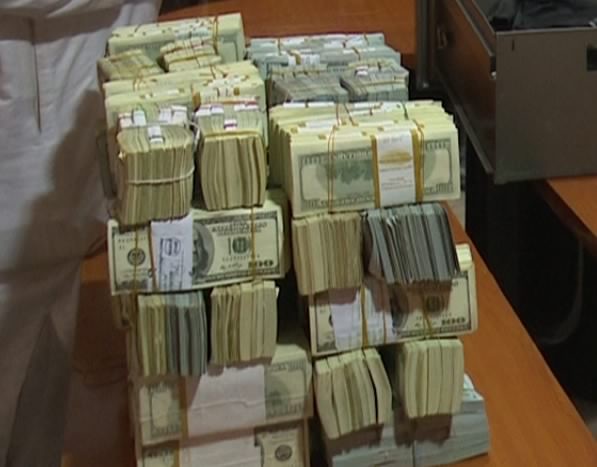 Like a typical Shakespearean comedy, the great dollar find in Lagos penultimate Wednesday following a whistleblower’s tip-off seems to have inadvertently bequeathed to the public space a slew of memorable jokes – some quite libelous.

In response, the addressee would declare that such allegation could only emanate from the erratic imagination of a psychiatric patient unable to adhere strictly to his medication regimen – clearly a poignant innuendo at his accuser, well known to have survived some mental health challenge in the past.

As if that was not hilarious enough, a photograph – obviously captured with a zoom lens – of Ayo Oke, the embattled Director General of the Nigerian Intelligence Agency (NIA), surfaced online Wednesday depicting the bespectacled spook shedding tears in the forecourt of Aso Rock in what should shock custodians of the cloak-and-dagger tradition of the spy world.

(However, this could not be independently verified at this writing.)

Oke’s emotional meltdown, presumably over the sorry turn of events, reportedly followed his inability to secure audience with the Vice President after the news of his suspension.

If true, it would be a different kettle of fish altogether. Just when did it become permissible for a top service brass to shed tears so cheaply in public? A lion heart, stern visage and grace under extreme duress are supposed to be the minimum pre-qualifications to be admitted into the secret service.

Also implicated is Oke’s own spouse. Earlier, one account alleged she was the courier who, in various guises and disguises, had smuggled in over the time the mountain of dollars in bits with “Ghana Must Go” bags. She was said to have gone to great lengths to conceal the air of prosperity around her in shabby clothes.

Since everything was hush hush, even the usually nosy resident security guards never quite succeeded in unraveling the name or identity of the mystery tenant on the seventh floor of the Osborne Towers. For that reason, the flat was reportedly referred to conveniently as “Apartment – – – (pronounced as dash, dash, dash).”

Well, beneath the foregoing comic barbs and pathetic imageries surely lay a bigger tragedy. What is invariably laid bare is an increasingly dysfunctional state. Truth be told, the suspension of Oke on Wednesday does very little to wash the Buhari presidency clean of reproach arising from a curious failure to act promptly.

Given the gravity of the issues involved, it is very scandalous that no one has spoken directly to the Nigerian people thus far on the multi-billion cash haul at Ikoyi. Why is it always a difficult task for an increasingly distressed Presidency to seize a defining moment to reconnect with the people, thus owning its little victory?The press release announcing the suspension of Oke and Lawal can never be a substitute. Any suggestion that since NIA was involved, information be hoarded “for national security” is most laughable indeed. Note, what is involved here is taxpayers’ money.

As a mark of accountability to the Nigerian public, one would have thought the Information Minister would issue a statement within 24 hours after the matter hit the airwaves. That should have preceded the duo’s suspension and helped to deflect the assortment of salacious conspiracy theories, rumors and wild speculations that have filled the airwaves in the last one week. The most outlandish of the rumours being that President Buhari’s perceived procrastination was only trying to shield someone in his camp.

Again, one account claimed that apart from the cash uncovered at the “safe house”, some Jonathan/Sambo 2015 election campaign paraphernalia were also recovered. How true is this?

Indeed, the snippets in the public domain in the past one week were gleaned from “sources” by the media. From experience, not everything published or aired is true. Such channels are prone to abuse. Sometimes, some mischief-makers would give false leads to reporters hungry for exclusives simply to settle scores with enemies at the expense of truth. It is therefore no coincidence that the airwaves have since been filled with all manner of conspiracy theories.

In Rivers, Governor Nyesom Wike would have the nation believe that the money is part of the proceeds from the hurried sale of the state’s turbine assets by his predecessor in 2014. He further alleged that a substantial part of the money was diverted to fund Buhari’s presidential campaigns in 2015. An accusation stoutly denied by Rotimi Amaechi, now the Transport minister.

Overall, the initial spin put out by Oke’s friends and enablers that the cash warehoused in the “safe house” was from funds approved by former President Goodluck Jonathan came off its wonky hinge after a vigorous disclaimer by the Central Bank.

According to the apex bank, at no time did it truck any cash to NIA as far as it could remember.

The veil would seem completely yanked off the masquerade two days later following an unconfirmed report that the so-called “safe house” is owned by a company controlled by Oke’s wife. If true, then this should inspire the next blockbuster Nollywood flick that could tentatively be entitled, “The Making of a Billionaire Whistleblower”.

So, where did Oke get his cash? By magic? Could it be part of the $15b devoured like a buffet in Dasukigate?

These are some of the big puzzles expected to be resolved in the times ahead.

Also sent on suspension on Wednesday is the Secretary to the Federal Government, Lawal Babachir, trailed in the past six months by staggering allegations of helping himself to hundreds of millions of naira through incestuous contract awards to cut grass at the camps of internally displaced persons in the North-east.

According to the Presidency statement, both Oke and Lawal are to stay off work pending the report of a top-level panel headed by the Vice President. The fact-finding committee is given two weeks to complete its work.

In the final analysis, unlike the seeming sleep-walking Presidency, the Economic and Financial Crimes Commission (EFCC) deserves kudos for busting the Osborne Towers scam. Some commentators, obviously with antipathy for the agency, have, as usual, been pouring invectives on its chairman, Ibrahim Magu, for being “so excitable” and preferring “high media drama” to “inter-agency cooperation/collaboration” even after being told that NIA owned the cash upon the arrival of EFCC agents at the location. Predictably, the cash was explained away as meant for “covert operations” to keep the country safe.

But had Magu acquiesced and told his men to vacate the place, how would the rest of us have known that it is possible, even at a time of severe recession, for an institution of state to sit idly over N13b cash for two consecutive years, unknown apparently also to the commander-in-chief himself?We are talking of a figure that represents what four or five states in Nigeria get as federal allocation in a month being at the disposal of one federal DG!

Please, Nigerians can do with even more drama, if that is all the price required of them price to know the truth.

Is There Any Hope For Nigeria? By Bolaji Samson Aregbeshola