RANDOM THOUGHTS ON NIGERIA TODAY I must thank the leadership of the Nigeria Union of Journalists (NUJ) Southwest Zone, for the honour being bestowed on me by making me the Grand Patron of the association in the zone. My relationship with the media has been long, right from my students’ unionism days at The Polytechnic…”
Yusuf
featured hero Op-Ed 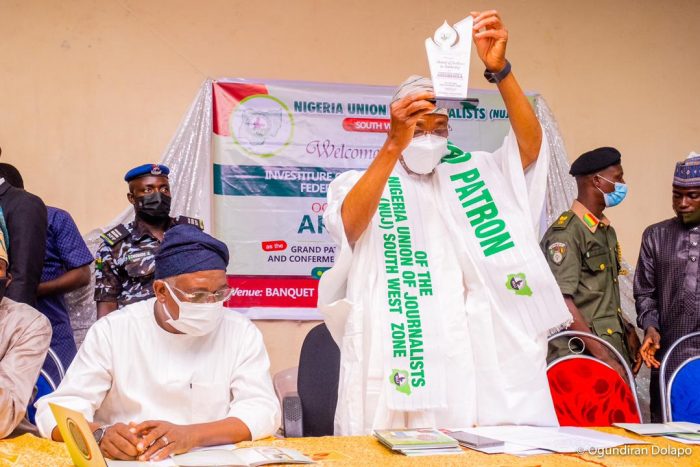 I must thank the leadership of the Nigeria Union of Journalists (NUJ) Southwest Zone, for the honour being bestowed on me by making me the Grand Patron of the association in the zone.

My relationship with the media has been long, right from my students’ unionism days at The Polytechnic Ibadan, when I used to write for campus journals, especially those with leftist orientation.

Those were the days of ideological ferments when there was consciousness and, as fiery young men, we sought to change the world for good.

Of course, we knew then that the written word is powerful as the tool of idea propagation and consciousness formation and shaping.

Since then, as some of you already know, I have had sustained interest in some print and electronic media, running to two decades.

My interest in the media stems from my belief that humans are intrinsically good and will be inclined to do the right thing if properly informed. Education indisputably is the bedrock of being learned but this must be reinforced daily on a good diet of information.

An educated person without subsequent relevant information is not better than the uneducated but with current information. Therefore, in an environment where the media conscientiously inform and educate the people, they will be well mobilised for their own development, to resist tyranny and extend the frontiers of liberty and freedom.

This belief has sustained my interest in the media, not minding the huge cost in a challenging economy with zero prospect of profit. The cost is huge indeed, and many of you already know that the media, especially the traditional ones, are the least attractive for investment, if profit is the motive.

However, I consider it an invaluable gain if the media helps to birth an informed society where the human condition is improved and tyranny rolled back and freedom keeps expanding. But it is a cost I am willing to bear, in light of the noble overall objective.

This brings us to the challenges we face as a nation. From all studies I am familiar with, welding together a heterogenous people with disparate cultural and historical background is a long and tortuous process that can suffer colossal reversal at any time, irrespective of the progress already made, if the actors are not careful.

We have the stories of Yugoslavia, Czechoslovakia, Senegambia, Ethiopia, Soviet Union and others that have to go their separate ways after living together as one nation for decades.

Even in prosperous and seemingly stable Europe there has been sustained separatist agitation in France, Spain, Belgium, Italy, Germany, Cyprus, Finland, Denmark, Azerbaijan, Lithuania and virtually all over the continent. In spite of the failed referendum for the independence of Scotland, the call for separation from Britain has not abated.

This is because, as the influential American political scientist, Samuel Huntington, put it, ‘Democracy anywhere is an unfinished business’. Where democracy is faltering, what we need is more democracy.

The call for separation is expensive and can be disruptive. It takes a great toll on development. The creative energy and scarce resources of the people calling for separation are dissipated in what may turn out to be a fruitless effort. Some of the agitations have been going on for centuries and they are not closer to it than they were at the beginning.

Besides, those who take the precipitate action of resorting to armed conflict often plunged their land and people to ruin from which there may not be an exit option. Nations are often locked in civil wars of mutually assured destruction in which peradventure one side wins, the victory will turn to ashes because the cost of victory is the loss of everything that was fought for.

Wars can also be so devastating that when it ends, the people are set back by not less than a hundred years. Worse still, as it is well established in the revolutionary literature, revolution often consume her own children. Those who engineered popular uprising may be consumed by it.

This is not a cowardly outlook. When a war becomes inevitable, irrespective of my age and physical condition, I will be the first to volunteer then. But we are far from that situation and pray we will not get there.

I evolved in the epoch of pan-Africanism and black nationalism. It is therefore anathema for me to accept ethnicity as a basis for the development of space and people. It is a fact of history that every division fostered by sectionalism will not stop until the irreducible minimum division is reached. Somalia is a good example.

Nigeria’s unity is currently tested in ways it has never been. Therefore, the nation today needs men and women of character and of honour, in the mould of the founding fathers.

Nigeria needs citizens who are ready to make the appropriate sacrifices for the nation and for humanity.

The best way to go is do away with the mindset currently at play that Nigeria is a lie and therefore must be balkanized.

We are truly a diverse nation. But the strength in our diversity is immeasurable if only we would unite in its recognition.

The argument that the current political configuration holds down the country may be admissible to a large extent and we need to adjust our structure, both politically and economically. Nigeria needs to ensure maximum exploration and use of the resources by the constituent parts of the Federation with a view to encouraging healthy competition and broadening the space for mass participation in wealth creation.

Nigerians need to create a Nigeria where individuals can find fulfilment in life, even as they tread the narrow path of honesty, hard work and sincerity. They need to create a nation where justice reigns and no man is oppressed, where merit can elevate to the top and the content of a man’s or woman’s character is enough guarantee of enjoying the benefits of a prosperous federal society.
But the total of Nigeria as a nation is greater than any of its constituent parts!

And it must be preserved not only for Nigerians but also for the entire Black race.

Definitely, the responsibility of Nigeria to all peoples of African descent is very clear and we have so far lived up to it in more ways than one. Our unforgettable historical commitment to the liberation of Africans is a case in point. Our men of the armed forces have also lived up to expectations in their outstanding tours of duty in peace-keeping missions in Congo, Sierra Leone, Somalia, Liberia, Cameroun, Tanzania, the Gambia, amongst others.

In terms of fending off external aggression, especially from modern-day terrorists, the armed forces have done very well in keeping the country’s territorial integrity even though no one can deny that the work is still in progress.

This notwithstanding, our nation’s men and women in uniform are a source of our pride and they reflect the unity of the state.

Unity plays an important role in achieving everything that is positive. Unity, in our circumstance today, means pulling ourselves together when life gets messy, violent and looks like a big debacle defying solution.

As someone once wrote, unity is in fact an art that can be created and experienced only when everyone around is wholeheartedly involved in it.
The only duty to which we are all called today in Nigeria, diverse in opinions, in tribes and in tongues as we are, is to create unity so we may all experience its joy.

With the challenges we face in Nigeria today, I see an opportunity for us not to break up or break down but to break open! Open up to ourselves in truth so that we may appreciate each other, understand each other, honour each other and live together in peace and prosperity.

More importantly, solution to our differences and problems arising from disunity will be found only in a conscious effort by all of us to make fundamentally ethical every moment of our lives. By this I mean every one of us must live by the credo that our world, our Nigeria will be at peace when each person sees himself or herself in the other and vows to shun evil against one another.

The space known as Nigeria would be a haven of peace, unity and progress when each person of the 200 million of us treats every living moment as an ethical one in which the singular choice is clear: If evil would be done, it would not be by me!

We must always remember that a society is bound to swing to extremes when conscience no longer rules. We must therefore work hard to cultivate and nurture a thoughtful, sensitive and critical citizenry.

Nigerians must live the ethos of honouring their individual and collective consciences.

Of course, we must not lose sight of the fact that rebuilding our homes and communities is an urgent and most compelling duty if our nationhood would be sustained. That is the only way we can avoid building a society in which extreme behaviours thrive and consequently wreak havoc on our unity, peace and progress. I speak not just of building physical structures, but homes in which the values of honour, integrity, compassion and creativity are non-negotiable.

Finally, I cannot but refer us to Chinua Achebe’s essay, ‘What Nigeria Means to Me,’ in which he drew attention to our country’s first national anthem, ‘Nigeria, we hail thee, our own dear native land, though tribe and tongue may differ, in brotherhood we stand. Nigerians all, I’m proud to serve, our sovereign motherland.’

Then, he went on to the current one: ‘Arise o compatriots, Nigeria’s call obey, to serve our fatherland, with love and strength and faith…’

Now, the first anthem invokes the imagery of Nigeria as a mother while the second one invokes the imagery of a father! And he asked in that essay, as I ask all of us today: Is Nigeria our mother? Is Nigeria our father? My answer, like Achebe’s, is that Nigeria is neither a father nor a mother! Rather, Nigeria is a child, our child, whom we must love, care for and nurture!

Our peace and prosperity, our joy and progress as Nigerians depend on how well we nurture this child of ours called Nigeria.

The media has a historic duty, not only to put the government on its toes and censor it where it erred, but to also let the world know where dramatic improvements have been recorded.

More importantly, the media should be in dexterous in reporting conflict and volatile matters such that while not blacking out news, it should not be exacerbated in a way that engenders conflicts, breeds national acrimony and promotes separatism.

It is the very essence of corporate social responsibility, a major plank of which is that an organisation should ensure that its product does not in any way harm the users and the society at large.

I must thank once again, the South West NUJ for the honour. I thank the national body of the association for its support. I thank also all the people of goodwill that love us and have continued to support us through thick and thin.

I dedicate this honour to all media practitioners working tirelessly and uncompromisingly for the making of an informed society.