A Fulani herdsman at the weekend killed his landlord and farmer, Musliu Aliu at Igbeti in the Oke-Ogun area of Oyo State, leading to a heightened tension between the indigenes and the herdsmen in the area. Chairman of Igbeti community, Alhaji Alawode Jimoh Fasina, said the indigenes of the town had warned the deceased not…”
Yusuf
Oduduwa 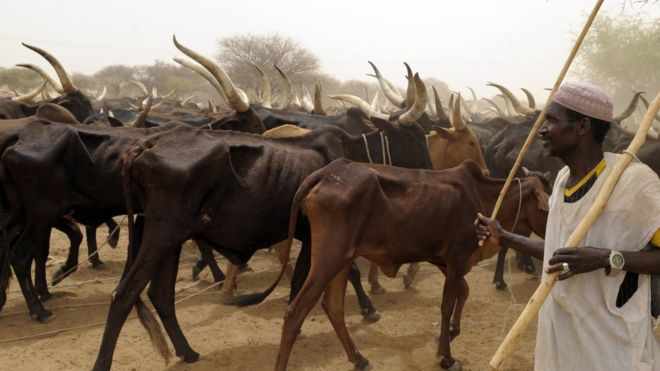 A Fulani herdsman at the weekend killed his landlord and farmer, Musliu Aliu at Igbeti in the Oke-Ogun area of Oyo State, leading to a heightened tension between the indigenes and the herdsmen in the area.

Chairman of Igbeti community, Alhaji Alawode Jimoh Fasina, said the indigenes of the town had warned the deceased not to accommodate the herdsman who has many cows in the area.

He said: “Aliu went to his farm where he had preserved some yam seedlings for planting. But the cows ate some tubers of yam, which resorted into a quarrel between them. The herdsman accused the deceased of poisoning his cows, who he said were discharging bile.

“The deceased told us he was going to report the incident to the police. But we learnt that he went to his farm to plant the yamseedlings. It was in the process that the herdsman attacked and killed him.”

In another incident, a woman was attacked by another Fulani man, who she claimed was trying to rob her.

According to the woman, the herdsman tried to forcefully grabbed her purse in which she had some money, but when she resisted, he tried to cut her purse which she tied to her waist with a dagger and in the process, the dagger pierced her stomach and gouge out her intestines. She is in the hospital.

However, in his response to the allegation of murder, leader of Fulani herdsmen in the area, Alhaji Saliu Kadiri who is also the National Chairman, Jamu Nati Fulbe Association of Nigeria, alleged that the deceased farmer poisoned his crops which the cattle ate and that led to its death.

“The herdsman reported the case and the following day, the man was found dead. He was not stabbed and there were no stab wounds on him. His tubers of yam were also burnt. Only my God knows who killed him,” he said.

When contacted, the Police Public Relations Officers (PPRO) Oyo Command, Mr. Adekunle Ajisebutu, a Deputy Superintendent of Police (DSP), told The Guardian that the herdsman who killed the farmer was still at large.

Meanwhile, Ambassador of the United States (U.S.) to Nigeria, Williams Stuart Symington has said the only way to stop incessant clashes between farmers and herdsmen was to engage in ranching of cows as it obtains in the U.S.

The American envoy, who made the suggestion during his visit to Governor Samuel Ortom of Benue State as part of efforts to achieve peace, advised Nigerians to always uphold peace and unity in their diversity for development to take place in the country.

He agreed with Ortom’s call for ranching of cattle in the country, noting that only such move will end the constant crises between farmers and herdsmen.