The Federal Government has called on Nigerians to avoid the temptation of giving ethnic colouration to criminal activities in the country, saying the morality of the African race and Nigeria in particular, abhors all forms of crimes and criminality. Minister of Interior, Ogbeni Rauf Adesoji Aregbesola gave the advice in his office in Abuja,…”
Yusuf
featured News 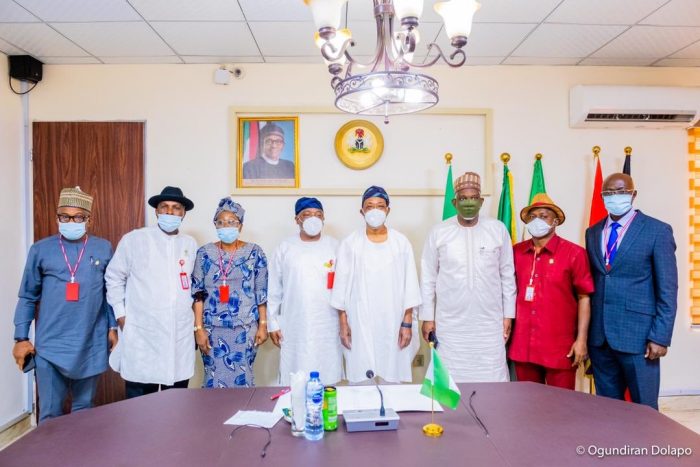 The Federal Government has called on Nigerians to avoid the temptation of giving ethnic colouration to criminal activities in the country, saying the morality of the African race and Nigeria in particular, abhors all forms of crimes and criminality.

Minister of Interior, Ogbeni Rauf Adesoji Aregbesola gave the advice in his office in Abuja, when he received a delegation from the Executive Intelligence Management Course (EIMC) 14, of the National Institute for Security Studies (NISS), led by its Commandant, Ayodele Adeleke.

Aregbesola observed that Nigerians must equate security with the global picture of a society that puts its emphasis on the dignity of man and human development, stressing further that crime is anathema to the nation.

“One thing we must all resist is the tendency of seeing crime in relation to one ethnic group or another, a criminal is a criminal no matter the ethnic group he or she belongs to. No ethnic group in Nigeria glorifies crime and criminality, so let us all condemn crime. Our morality itself makes crime an unpopular vocation,” he said.

The Minister called on the National Institute for Security Studies (NISS), as a security training institution, to see the need to develop policy analysis that will ensure adequate reorientation of an average Nigerian to see crimes and criminality as they are.

According to him, the institution should begin to think of how it could help Nigerians change the narrative of crime tied to a particular ethnic group and stop prioritising tension and heating up the polity unnecessarily: as no good governance could be provided in the atmosphere of chaos.

Aregbesola who said that every Nigerian has one thing or the other to offer towards the development of the country, called on the philanthropist to join hands with Government to empower the less privileged in the society so as to help reduce the rate of poverty amongst the people, which he said, in most times is a contributory factor to crimes and criminality in most societies of the world.

In his remarks, the Permanent Secretary in the Ministry, Dr. Shuaib Belgore who enumerated the functions of the Agencies under the supervision of the Ministry assured that the Ministry and its Services would continue to carry out their mandates which are geared towards the protection of lives and property of Nigerians as well as citizenship integrity.

Speaking earlier, the Commandant of the Institute, Ayodele Adeleke said that his team was in the Ministry to introduce the institution which was saddled with the responsibility of training top security personnel and also as part of its study requirements which he said, is to visit strategic Ministries, Departments and Agencies (MDAs) of the Federal Government with the view to tapping from their wealth of experience that would help the institution to come up with quality suggestions and SWOT analysis on how to provide good governance for the people of Nigeria and West African sub-region, in a better and secured environment.

He said that the National Institute for Security Studies (NISS) was a leading centre for the provision of ‘Competence and enhanced training for middle and top level managers of security in order to advance the best practice in conflict prevention, mitigation and resolution.’

Adeleke pledged the commitment of the Institute to partnering with the Ministry of Interior and other relevant Agencies of Government, with the view to ending the security challenges confronting the country.