In Nigeria, the federal government’s recent completion of erosion control ecology projects in Osogbo, capital of State of Osun is just thoughtfully complementary. How?  With monies sourced from elsewhere as though making acute demands on the state finances, the government of Osun had already enlarged the notoriously flood-prone headstreams across the state by dredging and…”
Editor
News Osun 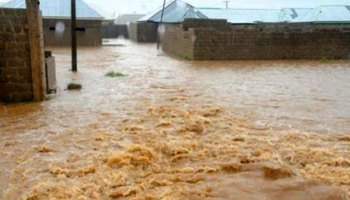 In Nigeria, the federal government’s recent completion of erosion control ecology projects in Osogbo, capital of State of Osun is just thoughtfully complementary. How?  With monies sourced from elsewhere as though making acute demands on the state finances, the government of Osun had already enlarged the notoriously flood-prone headstreams across the state by dredging and re-dredging that substantially reduced flow resistance of the water channels accomplished by removing snags, obstructions and such other meddlers. The yearly evacuation and re-evacuation practically stabilizes the configuration of Osun headstreams during Governor Rauf Aregbesola’s years in the Bola Ige House.

Of course, yes. Before the advent of Aregbesola, flooding was a perennial mishap in Osun, resulting from the very narrow channels of headstreams, de-mobilized by weeds, silt and other marshy effects. And residential buildings, business houses, classrooms, settlements, roads, streets, bridges, drainages and footpaths ravaged by floods were either collapsed or submerged in the aftermath. In other words, the ecoterrorism of the coercive Osun headstreams in the pre-Aregbesola time was such that actually destroyed Osun environment and intimidated the previous government of the Peoples Democratic Party (PDP) in the state into visibly profound inaction, obviously naked decay and clumsy deadlock. And PDP never knew what to do with the bullying headstreams in the state. The ecoterrorism in the PDP years in Osun fired up a variety of deliberate environmental crimes against the governed, going by the colossal losses of humans and materials the annual flood disasters massively wrecked on residents that also simultaneously harbingered bioterrorism, the supply of unsanitary, polluted water for public drinking in the State. Regrettably in Osun, the effects of floods were catastrophic. Farm crops and other properties were extensively destroyed and swept away; schooling imperiled; transportation was cut off; live and living threatened; and struggles by Osun residents to survive the hardship were encumbered.

What gains? The Aregbesola dredged and re-dredged  headstreams in the state have consistently improved drainage and sanitation in a general sense; saved lives and properties including farm produce; salvaged sinking buildings and structures with exposed foundation from further deterioration; rescued Osun residents from the pangs of the headstream-bred water scorpions that live primarily among dead waterlogged leaves and plant debris; shielded  Osun people  from flood raised bad tempered water snakes; reclaimed lost lands; and fully provided  the state protection from all possibilities of flood menace. Briskly, the dredging and re-dredging opened up several metric tons of sands to business minded individuals. Call them scavengers; call them sand dealers, contributing their own quotas to the state economy. In the main, the ecological control, mindful of Osun vegetation, Osun humans, Osun properties, and Osun topography has consistently removed threats posed by the stubborn headstreams to Osun atmosphere, Osun hydrosphere and Osun lithosphere.

And the recently completed federal government’s Erosion Control Ecological Projects in Osun that had the Aregbesola’s reworked waterways in the state lined with concrete, has excitedly surged up the benefits of the ecological intervention to Osun residents. At the project commissioning, Aregbesola stoically stated: “We have already spent about N3.4 billion on the dredging of about 344.44 kilometers of waterways and so, we are excited when the federal government decided to line the water channels with concrete to make them more useful.”

However, straightening the records, there has not been a single report of flooding in any part of Osun in the Aregbesola 2-term government. The lonely flood on a rainy Tuesday in September 2016 was due to the natural factor of stormy water supply from sudden surge of waters from neighboring dams which meandered in different directions, bending to the velocity of the ragging currents and contributory run-offs to foreboding Osun headstreams that undercut and  diverted railing headwaters that caused largely intensive peak discharges and braided the flow of the headstreams into multiple deltas through stream sediments, made worse by new kindred structures and debris depositions by neighborhood recalcitrant residents. That was why Aregbesola at the commissioning cautioned: “I urge our people to desist from throwing waste on waterways during rain for it (concrete water channels) to last longer.” And the federal government through Lai Mohammed, Information and Culture Minister advised Osun residents, the direct beneficiaries to take over ownership of the projects for maintenance and sustainability.

The ecology projects in Osun, coming from the people-centric federal government of the All Progressives Congress (APC) is a lavish reminder of the corrosively corruptible, obnoxious, mischievous, spurious, insidious, malicious, invidious, tenuous, disingenuous, wicked and shameful PDP’s 16-year government at the centre. Listen further to Aregbesola at the commissioning: “It is worthy of note that this is the first time in the history of the nation that the federal government will execute a project, commission it and ensure that it is delivered to the state government for maintenance.” Promise made, promise delivered!

It is unlike PDP’s ex-federal government’s N17.66 billion promised palliative to ameliorate the agonies of the 2012 country-wide floods that never got to the actual state-victims of the floods. The floods killed 1,555 people in South-west, and 6,200 in the South-south and North-central Nigeria. The balance of N4.3 billion disbursed to relevant government agencies under the watch of the PDP government never brought succor to the victims, as the money was corruptly diverted. Promise made, promise perforated! And the PDP states that received special funding from the federation accounts on ecology and environmental disasters was actually diverted.

Like recalcitrant PDP, the unruly, stubborn human altitude to waterway must stop. The deposition of debris on the stream in Osun must stop. Farming and building structures too close to the stream channels by Osun residents must stop. The individual has a significant role in curtailing flood. That is the requisite magic to sustain the much cherished Osun flood-free status.

What Is Going On With Kenya Politicians?