The Federal Executive Council (FEC) on Wednrsay approved various contracts worth over N30.77 billion for projects in five ministries. The ministers, whose ministries got the approvals, announced this to State House correspondents after the week’s virtual FEC meeting presided over by Vice-President Yemi Osinbajo (SAN) at the Aso Rock Presidential Villa in Abuja. The ministers…”
Olamide
Economy News 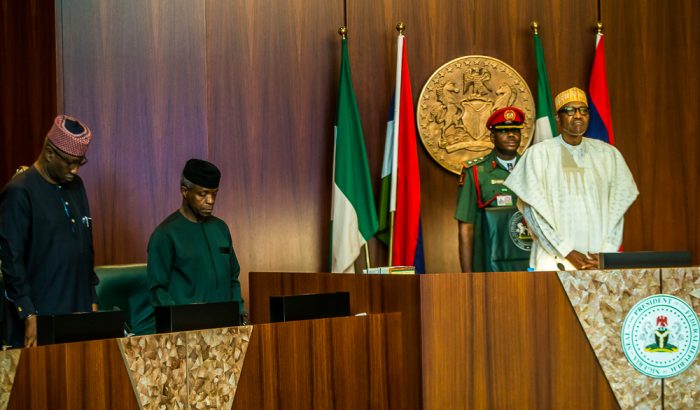 “One It approved the payment of the claims and the variation of onshore and offshore cost of existing contract for the construction of 1×1 50 MBA three 31, 32, 33 KV sub-stations at Damaturu and 1×330 KV land by extension at Gombi in favour Msssr Kadlak International Limited for $1,621,423.88 plus N102,905,606.7.
“The other one is the approval of the contract for the design, manufacturing and supply of four fabricated sub-stations of 2×100 MBA 132 33 KV power transformers with complete accessories for deployment to Damaturu, Potiskum, Biu, and Maiduguri for the Transmission Company of Nigeria (TCN) in favour of Msssr Kidon T Good Electric Company Limited and Incomtel Engineering Limited at $24,387,850.22 plus N1,475,204,584.34. Altogether, it is N10,730,393,742.82,” he said.
Sirika said the Council okayed N10,594,057,618.20, inclusive of VAT 7.5 per cent, for the provision of Airport Management Solution for the international airports of Abuja, Lagos and Kano, Port Harcourt and Enugu. It awarded the contract to Messrs Arlington Securities Nigeria Limited, for the completion period in 12 months.
Transportation Minister Rotimi Amaechi, who was represented by Mohammed, said he presented five memoranda to Council, all of which were approved.
According to him, the five memoranda, which touched on the rail and maritime sectors of the ministry’s purview, got contracts for N7.038 billion.
“The third memo is one seeking Council’s approval for the award of contract for the design, manufacturing, testing and commissioning of two power cars to be used on the narrow gauge by the Nigerian Railway Corporation (NRC) in favour of CRC Niginc Pozen Limited, at N1.662 billion.
“There’s another memo by the Minister of Transportation, which sought Council’s approval for the award of contract for the removal of wrecks on Badagry Creek from Tincan Island to Navy Town in Lagos State in favour of Messrs Humba Marines Works Nigeria Limited  at N3,587,955,266.40 and it’s supposed to be completed within 25 months.”