The last decade in the State of Osun spoke of glorious heights unprecedented. The Rauf Aregbesola movement and administration, which pioneered the enviable progressive movement that birthed the New Order deserve some praise. NIYI OLASINDE recaps the journey, showcasing the many positive impacts of Rauf Revolution in the State of the Virtuous. IT will forever…”
Yusuf
featured Op-Ed 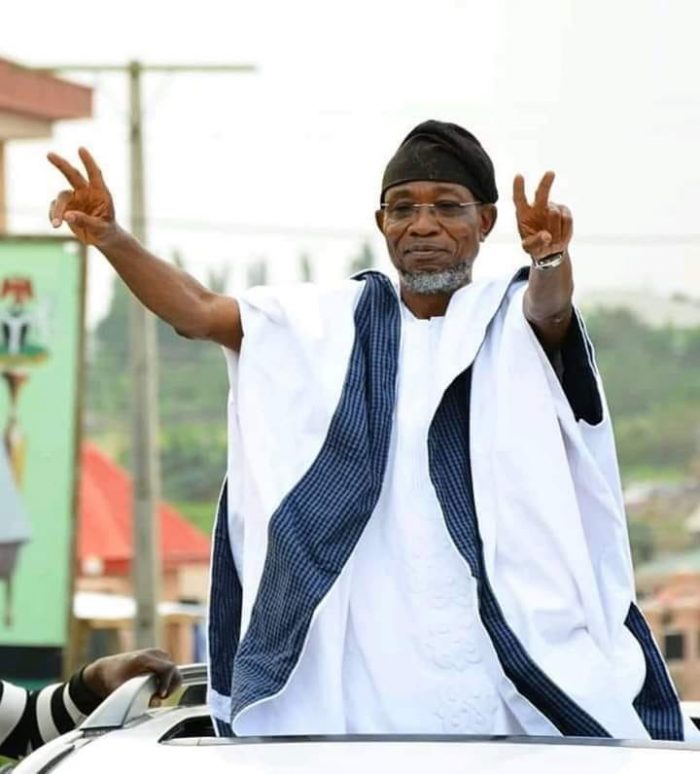 The last decade in the State of Osun spoke of glorious heights unprecedented. The Rauf Aregbesola movement and administration, which pioneered the enviable progressive movement that birthed the New Order deserve some praise. NIYI OLASINDE recaps the journey, showcasing the many positive impacts of Rauf Revolution in the State of the Virtuous.

IT will forever be impossible, and proving a venture in futility to hide the light of the good deeds of progressive governance in the State of Osun under the bushel. The more detractors make the attempt, the larger the clarity and un-equivocation looms. Central to this claim is the fact that the Rauf Aregbesola administration, which assumed the saddle of service and governance on November 27, 2010, was, aside winning in landslide victory in its second term bid in office in a keenly contested election in 2014, able to hand over to a legacy administration in continuity eight years later.

This feat alone is clear attestation to the good governance, marked with unperishable deeds which the administration gave to the state and its teeming populace.

Perhaps the best way to approach documenting the life and times of the Aregbesola administration and its innumerable good deeds is to account for benefits and laurels accruing to the state since 2018 till date, two years after the sun had eclipsed for the administration.

Glowing tributes could not adequately capture its strides in the education sector, more than feathers that same have clearly added to the cap of the state. The Year 2020 Best Young Scientists Award for secondary school students throughout the federation was won by a Senior Secondary III of Osogbo Government High School, Abdullahi Akanbi Akintade. Akintade adorned the venue of the award presentation where he received the handshake of President Muhammadu Buhari with the self-same unified school uniform that has been so much condemned, criticised and castigated.

Earlier, precisely in 2018, two students of the state’s public school who were candidates in the Unified Tertiary Matriculation Examination (UTME), organised by the Joint Admissions and Matriculation Board (JAMB) took the upper lead in that year’s outing as they made brilliant scores in the external examinations.

Prior to the advent of the Aregbesola administration, the state had had a consistently poor outing in external examinations, with a majority of school leavers, especially from the state’s public secondary schools, not admissible or matriculation-worthy into institutions of higher learning.

The performances of the state’s candidates in the West African Senior Secondary Schools Certificate Examinations (WASSSCE) was so consistently poor yearly that in the 2010 episode, which marked Oyinlola’s last year in office, the state had deteriorated to 12 to 15 per cent passes in five subjects which included English Language and Mathematics.

By 2016, which marked two years to the exit year of Aregbesola from office, the performance has shot up three times, grew up to between 46 and 48 per cent passes. It is certain that improvements witnessed today in the upper swing are leftover effects of Aregbesola’s intervention programmes.

This rapid improvement in performances of the candidates of the state’s extraction was enabled owing to the sterling initiatives introduced by the administration, which included unified school uniforms, schools’ reclassification, introduction of novel e-learning module, called Tablets of Knowledge (Opon Imo), massive recruitment of trained, competent, qualified and experienced teachers and the introduction of schools’ discipline corps, schools calisthenics, among other intervention.

Most gigantic and ambitious of all is the revival and revamping of learning environment in the public schools: 67 elementary, 49 middle and 11 High state-of-the-art ultramodern school complexes were put in place to make public schooling more attractive, thereby bringing them to compete favourably with their counterparts (and even their private contemporaries) anywhere the world over.

During the course of the current year, two feats recorded kept immediate past administration in the state in reverberating glow. The State of Osun was named as one of the beneficiaries of a monetary grant, which accrued to some states of the federation on the basis of performance-based component of the World Bank Assisted State Fiscal Transparency, Accountability and Sustainability (SFTAS) Programme-for-Results. By this token, the state, alongside 23 other states got its share of the N43,416,000,000.

In similar vein, Osun was recently ranked the state with the third lowest poverty index in the entire nation. This ranking, the Nigerian Poverty Index report for 2019, as conducted and released by the National Bureau of Statistics translates to the fact that Osun is the third richest state in Nigeria, after Lagos and Delta states!

In addition to the foregoing, latter years of the Aregbesola administration saw the state recording its firsts in many respects. So, these feats took root from landmarks reached during the period Aregbesola held sway over the affairs of the state. Within the space of the last decade, the state has been through a lot of innovative programmes, poverty alleviation, capacity building and empowerment. Little wonder that, the state was ranked second less poverty-ridden in year 2016; while it took the first shot in 2017.

In the area of execution of concessioned federal infrastructural projects, Aregbesola’s numerous projects attracted handy refund this year, to the tune of N17billion. These are tips of the iceberg in the line-up of rewards accruing to the state till date, courtesy of the Aregbesola’s administration.

The administration of Ogbeni Rauf Aregbesola in the State of Osun came on board exactly ten (10) years ago, when after a long-drawn legal tussle, spanning three-and-half years, the appellate court situated at Ibadan, Oyo State capital sacked the Peoples Democratic Party’s Prince Olagunsoye Oyinlola and ordered immediate swearing in of the symbol of the Action Congress (later Action Congress of Nigeria) in the 2007 gubernatorial elections, Ogbeni Rauf Aregbesola. Since that historic judgment, things have taken positive turn in Osun, as the people have continued to witness in an unprecedented fashion the goodies of Government Unusual throughout the nooks and crannies of the state.

Aregbesola’sSix-Point Integral Action Plan; through which apogee he delivered most successfully during his eight-year, two-term tenure as helmsman of the State of Osun, is focused on creation of wealth, through active engagement of the abundant human resources available in the state, banishing poverty, massive food production, youth and women empowerment, promotion of healthy living and promotion of conducive environment for the sustainable growth of commerce.

Through his plan as guiding star, his government sought to recreate a socially responsible system of governance with welfare of citizens as a cornerstone. It also sought to recreate the glorious period of Yoruba political era built on Chief Obafemi Awolowo’s social welfare and well-thought-out political strategies and performance; a government of the people, by the people and for the people by the Grace of the Almighty God. And so it was!

Aregbesola can rightly (and most aptly) be described as the Architect of Modern Osun. Having ruled the state meritoriously and handed over successfully to a legacy successor, ours is no longer a matter of frantic efforts which abound in merely outlining the direction of the Aregbesola administration, based on the promises made to the people of Osun before the April 14, 2007 elections; reiterated during the inauguration of the new government on November 27, 2010; and fresh promises made during the 2014 gubernatorial election campaign period.

As things stand today, the nooks and crannies of the state are replete with solid, concrete achievements, with which to rate the administration’s achievements as superlative during its entire period in office.

Generally, Ogbeni Aregbesola never wavered nor refracted from delivering his pact based on his Six-Point Integral Action Plan for the development of the State of Osun. A cardinal objective of government is to create a highly motivated workforce, since the success of government programmes depends to a large extent on how well they perform their duties. It is therefore not surprising that one of the first actions that he took was to approve the payment of 13 month salary to workers in the state public service as end-of-the-year bonus.

Needless to say, Education in the State of Osun all through the Aregbesola administration was not only free; it was also comprehensive and qualitative. Aside the introduction of timely intervention nuggets, like the State of Osun Schools’ Infrastructure Development Project (O’SCHOOLS), the O’UNIFORM, O’CALISTHENICS and the Opon Imo, which have already been enunciated above, the Free Elementary Schools’ Feeding and Health Programme (O’MEALS), is another key novel and innovative programme in the annals of public education in the state that hugely transformed the state into envy of its counterparts within the comity of states.
In other sectors and sub-sectors, other laudable programmes exist, which have impacted positively on the lives of residents of the state.

In agriculture and environment sub-sectors for instance, we can cite the Osun Rural Enterprise and Agriculture Programme (O’REAP) and the O’CLEAN Project. Other “O” programmes that can be easily underscored include the O’ Honey, O’ Beef, O’ Fish and O’ CLEAN Plus.

In tackling unemployment, the administration started the Osun Youth Empowerment Scheme (OYES) to register unemployed youths and assist them in finding and pursuing a career of their choice. The government has therefore, employed twenty-thousand youths in more than three streams in all; in various sectors in the state. In other words, the administration was able to cater to the employment needs of at least 80, 000 youth in about four streams! This feat has earned widespread applause from observers within and outside the country and has fast become a model for emulation. The OYES initiative developed in line with the objective of government to banish poverty and hunger from the state through job creation and employment opportunities for its teeming youths.

Through a responsible and responsive spasm of leadership and stewardship, Aregbesola demonstrated his rare quality as great leader of unequalled enduring ability through thick and thin. His rare and unfathomable cope of governance through adverse economic climate which characterised the latter parts of Goodluck Jonathan years; stretching to the recession years that climaxed his years in office placed him in the fore as monumental achiever and quintessential trail blazer, especially in putting on ground solid, physical infrastructural projects which are of immense overall benefit to the good life and benefit of his people.

As Nigeria’s Minister of Interior since August 2019, Ogbeni has displayed his rare talents in wielding the Midas’ touch anywhere duty calls for him to serve. The change in nomenclature of custodial centres and correctional institutions, first-ever retreat for officers and men of the various services within the ministry as a way to upscale strategic actions and forestall tragedies of insecurity are part of reforms he has brought to bear on the service. In addition to these, decongestion of correctional facilities; even long before the outbreak of the dreaded COVID-19 pandemic and the successful introduction of some modern modalities of visa entries in compliance to global best practices are other reforms that got anchorage through his ingenious and relentless efforts as political head of the ministry.

INTERVIEW: To Build Your Marriage, Have Sex 104 Times A Year – Adewale, Marriage Counsellor

Honour to Whom it is not (yet) Due, by Lekan Sote