Nigeria, which is in the West Africa region, is Africa’s most populous country and its economy was recently rebased as Africa’s largest economy. One of its major challenges is providing adequate food security for its more than 170 citizens. Aside the crucial need for a viable alternative to declining crude oil revenue, the need to…”
Editor
Agriculture 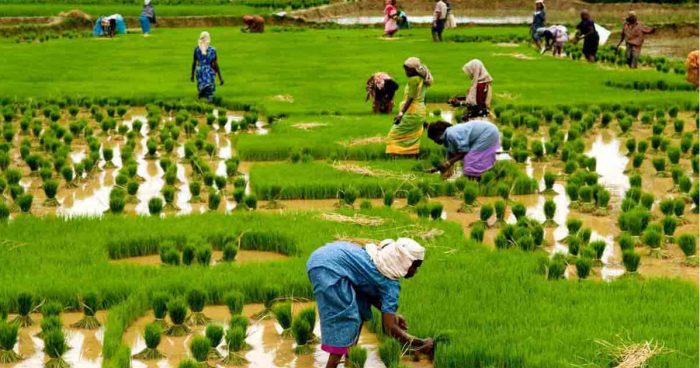 Nigeria, which is in the West Africa region, is Africa’s most populous country and its economy was recently rebased as Africa’s largest economy. One of its major challenges is providing adequate food security for its more than 170 citizens.

Aside the crucial need for a viable alternative to declining crude oil revenue, the need to assuage the local food demand of the huge populace was one of the main reasons why the Federal Government has decided to prioritise agriculture under current administration.

The need to feed so many millions and achieve sufficiency in local production of food has been a topical issue and there are several vital interventions by both government and the private sector to make this a reality; in line with the first goals of the global Sustainable Development Goals (SDGs), which involve eradicating poverty and hunger in the world.

However, to meet the world’s future food security needs, he stressed the need to make sure agriculture is also central to strategies to address other SDGs on poverty, water, biodiversity, sustainable cities, sustainable energy, and climate change.

To him, a new paradigm of inclusive agriculture green growth is needed, and this can be achieved through four actions: considering agriculture a key contributor to multiple SDGs, not just SDG 2 on zero hunger, building cross-sector coalitions, transforming the financial systems, and advancing research and education.

Christophersen is of the belief that through these four steps, the world can not only feed the 9 billion world population, but also do so in ways that sustain global ecosystems, empower local communities and build more resilient cities.

Nigeria, according to reports, has imported nearly 17 million tonnes of rice over the past five years. The nation imported 2.3 million tonnes in 2016, while demand in the same year was 5.2 million tonnes. Rice accounted for 1.26 per cent of the entire budget for 2017.

In response to government calls for local players to help feed the 170 million Nigerians, Olam, a multi-national agribusiness, set up a rice farm in 2012.

Olam’s farm in Rukubi village in Nasarawa State is one of the largest rice farms in Nigeria and although it grows 50,000 tonnes each year, which is just a small fraction of the country’s demand.

According to statistics provided by the Vice President Corporate and Government Relations, Olam Nigeria, Mr. Ade Adefeko, an Olam rice project is also located at Ondorie, Nasarawa State, about 265km south east of Abuja, on the banks of the River Benue.

The project, he noted, commenced on July 1, 2010 and land development started in January, 2012. The project, from inception till Dec 15, 2016, has reportedly gulped N20 billion, while the total area of the farm is 12,920 hectares. The current area under cultivation in the Olam rice project is 4,351 hectares.

The Olam rice farm currently employs 1,044 persons (594 regular, 450 seasonal); the mill also hires 959 employees (81 regular, 878 seasonal), while 90 per cent of the workers are from local communities around the farm to boost employment. The current number of outgrowers is 4,003, while the target number of outgrowers by 2018 is 16,000.
Olam is developing a 10,000 hectare fully irrigated paddy farm on greenfield site in Ondorie, Nasarawa State. The farm is expected to yield 10 MT per hectare (over two annual crop cycles), based on four varieties of high-yield rice tested with the West African Rice Development Association 4,450 hectares are already under cultivation, with a further 3,000 hectares on target for 2017/18.

At the heart of the Olam rice farm is a mechanised rice milling facility, which incorporates Satake milling technology and Italian par boiling technology. This is expected to provide 67,500 metric tonnes (MT) of milled rice per annum to the domestic market.

The ‘nucleus’ model combines the quality control of a large scale commercial farm with the cost and scalability benefits of smallholder ‘outgrower’ networks. The rice-growing communities in Nasarawa, Benue and Kaduna States are supported by Olam with group formation, training and all agri-inputs on credit in order to improve their own paddy yields and revenues with assured buy back system.

The major stakeholders in these Olam initiatives include the Federal Government of Nigeria, CBN, IFAD, and USAID MARKETS. Also, 4,003 farmers including women are currently engaged in the programme with an area of 5563 ha, with a target of 16,000 by 2018, ultimately supplying 30 – 40 per cent of the mill’s capacity. Olam buys paddy from all producing states, controls quality and hires transport to factory.

Olam has expressed commitment to the next generation through providing school buildings, materials and scholarships for students in the host communities and beyond. It is also connecting communities through development of 54km of roads between surrounding villages and ensuring access to clean water and electricity through provision of bore wells and solar lamps.

According to the United Nations Food and Agriculture Organisation (FAO), Nigeria imported 2.3 million tonnes in 2016, about half of the country’s estimated requirements.

However, reports note that most farmers in Nigeria are small scale and struggle to get the financing they need to improve farming methods and boost their yield.

According to reports, the agriculture minister claims that Nigeria will become self-sufficient in rice production by the end of the year 2017. However, critics of government policy not only point to a lack of spending on agriculture, but also to an under-investment in the entire value-chain for rice.

According to analysts, Nigeria has the capacity to produce what it needs and that it can use the agricultural sector to leap into a new industrial age. This, they noted, will only strengthen Nigeria’s evolution on to the international stage as a strong, rapidly growing, and sustainable economy.

To them, it is not a matter of whether Nigeria can feed itself; it is a matter of when Nigeria will feed itself. As Nigeria moves to realise the development goals on eradication of poverty and hunger, it is hoped that other players will replicate the success of Olam’s rice farm to further enhance local food security. That is a worthwhile goal.