The Ekiti State House of Assembly, has passed the bill for the amendment of the State Electoral Law. According to News Agency of Nigeria (NAN), the amended bill was tagged, “Ekiti Independent Electoral Commission (third amendment) Bill, 2021.” The amendment was done at Tuesday’s plenary, presided over by the Speaker pro-tempore, Chief Gboyega Aribisogan,…”
Olamide
News 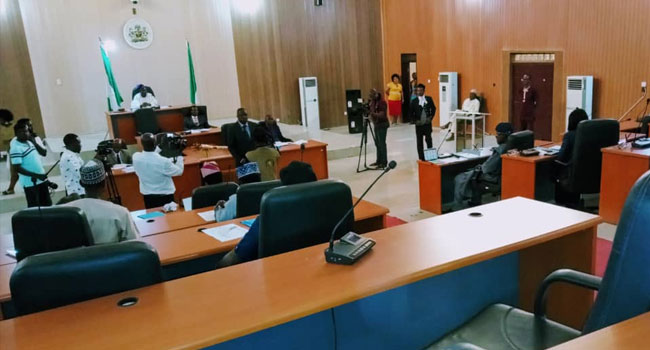 The Ekiti State House of Assembly, has passed the bill for the amendment of the State Electoral Law.

Aribisogan, who is the Majority Leader, was nominated by Mr Stephen Aribisogan (APC), Ikole Constituency II and seconded by Mrs Yemisi Ayokunle (APC), Ekiti South-West I, in accordance with Rule 27 of the House Standing Order.
Contributing to the debate, Aribisogan said that the bill was an amendment to the existing law to make the commission performed effectively.
Also speaking, the sponsor of the bill, Mr Bode Adeoye (APC-Ekiti West II), said that the amendment was a result of the recent creation of 19 Local Council Development Areas (LCDAs) by the state government.

Adeoye added the bill was aimed at providing adequate legal framework as well as empowering the electoral body to operate smoothly, in line with the current reality.

In their separate remarks, Deputy Leader, Mr Tajudeen Akingbolu (APC-Ekiti West I) and Mr Raphael Ajibade (APC-Moba I), said that the bill was coming at the appropriate time.
According to them, it will enhance more commitment on the part of the electoral body.